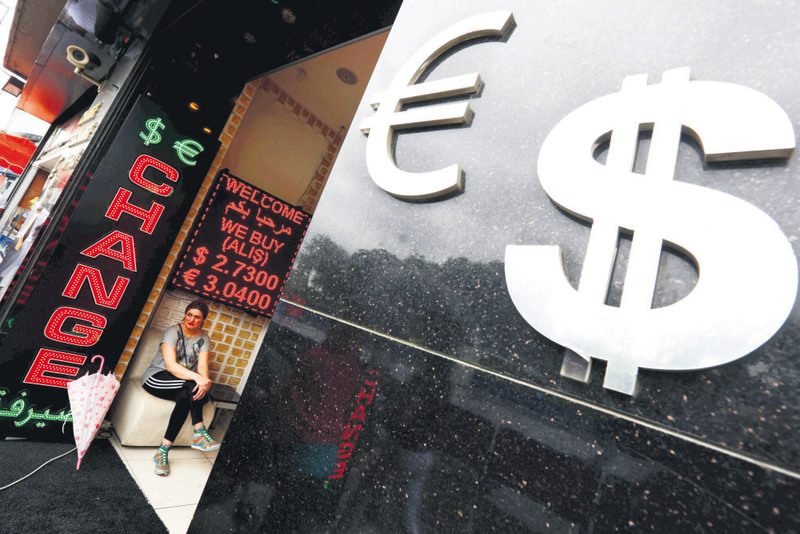 A woman sits at a money exchange office in Istanbul. The Turkish lira traded near record lows on Monday as nervous investors reacted to the prospect of a minority or coalition government.
by Daily Sabah Jun 09, 2015 12:00 am

Facing an unstable political environment after 13 years, the stock market suffered sharp declines as the Turkish lira hit a record low. While the markets try to regain their value on the second day, experts say the lira will continue to struggle

The BIST 100 index, Borsa Istanbul stock exchange's the main index, increased slightly on Tuesday after losing 8 percent of its value on Monday, while the Turkish lira failed to regain its value. The results of Sunday's parliamentary elections, which ended the Justice and Development Party's (AK Party) 13-year, single-party government and disrupted the country's political stability, have also rocked markets. The stock market has seen sharp declines, while the dollar and euro have reached a record high, causing a one-day loss of TL 82 billion ($29.93 billion) for Turkey.

The BIST 100 index was flat at the opening of the second session yesterday. The benchmark index increased 56.43 points to open at 78,290.91. Stocks on the index gained 0.07 percent in value, and the Turkish lira was traded at 2.7373 against dollar.

The fact that the election results brought an end to the single-party government and increased the possibility of a coalition government has caused deterioration in the market. The uncertainty about how the government will be formed has reawakened the nightmare of "political stability," which the market has largely forgotten about since 2002. The fluctuation is expected to continue in the long-run as well.

Following the election results, the stock market began the first trading day at 75,268 points with a drop of 8.2 percent. Making up for some of the loss in the second session, the stock market ended the day at 77,805 points with a 5 percent fall. The market value of the companies that were traded on the Borsa Istanbul was TL 585.3 billion on Friday, however, it dropped by TL 32 billion to hit TL 553.3 billion within a day.

The most severe reaction to a coalition government came from foreign currencies. The dollar, which corresponded to TL 2.6615 on Friday, started the day at TL 2.8094, setting a historic record with an upsurge of 5.5 percent. The Turkish lira has faced the sharpest deceleration against the dollar on a daily basis since October 2008, while the euro reached a historic high at TL 3.1148. The one-day rise in the dollar cost around TL 41 billion for the real sector, banks and public institutions. After the Turkish lira dropped to a seven-year low, the Central Bank of the Republic of Turkey (CBRT) made a symbolic move, reducing the one-week repo foreign currency interest rates for banks. With this step and the trend of developing countries' currencies, the dollar fell below TL 2.75 in the second half of the day. Political uncertainty had impact on interest rates as well.

Analysts predict that uncertainty about the formation process of a new government and oscillation will continue in the short-term. Suggesting that domestic investors in the stock market responded harshly to election results, analysts are of the opinion that an early election will be the worst outcome for the market. Pointing to the risk that the rise in exchange rates might reflect on macro balances, economists emphasize that the growth estimation rate of 3.5 percent might be reduced to 2 percent and the expected inflation rate of 7 percent might be increased to between 8 and 8.5 percent. The current period might see revisions in exchange and interest rates, and when considering larger global conditions, the Turkish economy may enter a more challenging process as well.
Last Update: Jun 09, 2015 10:40 pm
RELATED TOPICS