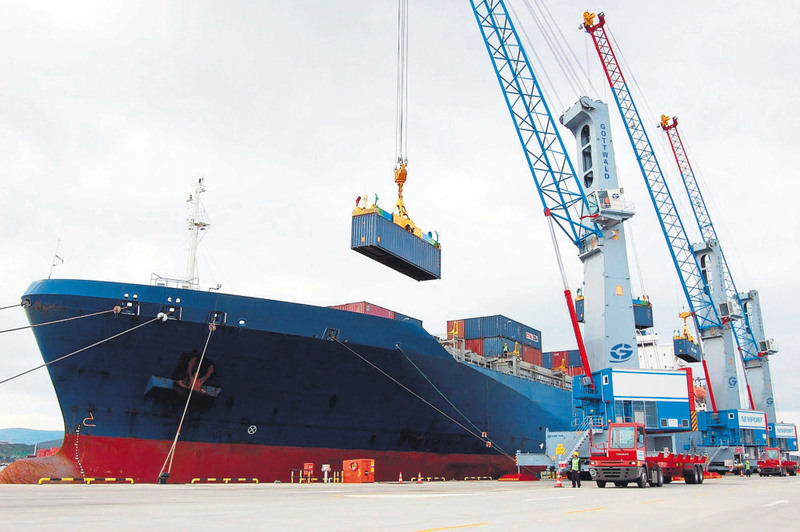 Exports dropped by 17.8 percent in May and experts point to euro-dollar parity as the main reason behind it. The Turkish Exporters Assembly head said the decline in exports worth $1.1 billion was because of the fluctuations

Turkish Exporters Assembly (TİM) Chairman, Mehmet Büyükekşi, said the greatest reason for the regression in Turkish exports is the decline in the euro-dollar parity. Parity-induced losses in exports accounted for $1.1 billion in May alone, while it reached $5.7 billion in the first five months of 2015, he added.

In parallel with the mobility in exchange rates and developments in world trade, exports have seen a decline since January. According to the Customs and Trade Ministry's unofficial provisional foreign trade data, exports dropped to $11.63 billion in May, marking a 17.82-percent decline compared to the same month last year. The average parity value plummeted by 18.7 percent and dropped from $1.37 to $1.12 in the first five months compared to last year. With the appreciation of the dollar against all world currencies, price pressure in world trade continues, said Büyükekşi, adding that they expect world trade will fall below $18 trillion by the end of this year.

Büyükekşi said along with the developments in the global economy, Turkey's market losses, which are also experiencing political problems, is another cause behind the country's decreasing exports.

According to official EU figures, while the EU's imports increased by 2 percent in the first three months, Turkey's exports to the EU increased by 13 percent in terms of euros, meaning Turkey is still expanding its market share in the European region. However, the problems and clashes in and around Turkey, for example in Iraq, are causing a decrease in Turkish exports. For instance, within the first five months of the year, exports to Iraq had declined by 27 percent, exports to Russia and Ukraine declined by 37 percent and exports to Libya declined by 40 percent - totaling a loss of $2.9 billion. Despite the drop in exports to Russia, Büyükekşi said Russia still remains one of Turkey's biggest export partners. Moreover, TİM believes the economic crisis in Russia is temporary and trade figures can be increased by participating in more trade committees and exhibitions. He further stressed that ending the crisis in Iraq is of the utmost importance for the future of Turkish exports.

While global developments appear to have caused a negative impact on exports and there is a decline in figures, there has been no drop in trade figures. Especially considering the 13-percent increase in exports to the EU, Turkey has become the fourth biggest exporter to the eurozone.

Furthermore, Büyükekşi said any steps necessary regarding Turkish exports will be taken in order to increase Turkey's market share and to research and focus on markets with high volume and potential, which in return will ensure that economic targets set for 2023 are achieved.

Büyükekşi emphasized that any interruptions to exports created by crises or political risks can be mitigated by their focus on value-added sales increases and by prioritizing research and development, design and branding in the long-term.

Arif Ünver, head of the Capital Market Investors' Association, said the most fundamental three aspects of exports were the changes in the purchasing power of the country to which exports are made, positive or negative impacts on currency stemming from the economic realities of the exporting country and political relations between countries that engage in foreign trade.

The decline in Turkey's exports observed in the recent period can be tied to internal and external reasons, Ünver stressed, adding that the strike occurring in the automotive sector temporarily damaged exports internally, but external effects had a more drastic negative effect. Ünver said the reason for Turkey's recent poor export performance was the sluggish economic activity observed globally. Stating that nearly half of Turkish exports were sent to Russia, Iraq and Europe in the first five months of the year, Ünver said that while the Russian economy received an additional blow due to low oil prices and Europe was fighting against economic pressures, it was inevitable to see these factors negatively impact Turkey's exports.
Last Update: Jun 12, 2015 12:01 am
RELATED TOPICS