Greece warned that coming week could seal its fate 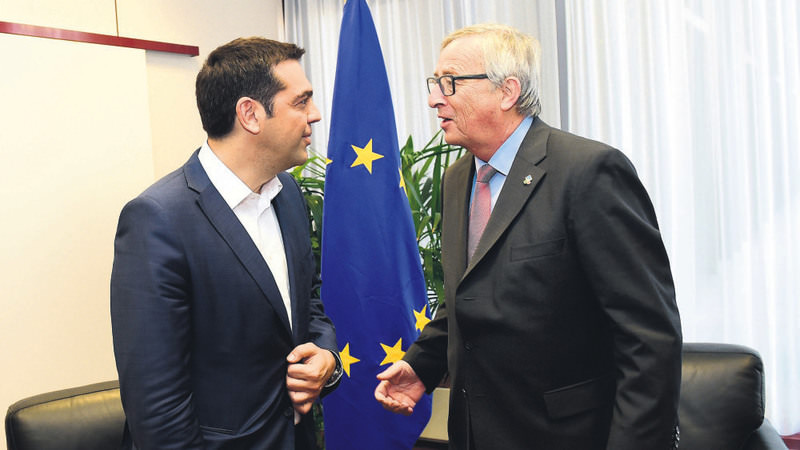 Greece refused to implement the reform package prepared by its creditors, failing to reach an agreement, as rhetoric continues to get harsher. A European official said there is no more time for gambling

The president of the European Union warned Greece that the coming week should prove decisive in Athens' quest to stave off bankruptcy. Donald Tusk, who chairs meetings of EU leaders, said yesterday that "there is no more time for gambling" and that next week's meeting of the 19 eurozone finance ministers in Luxembourg could be the make-or-break session in sealing Athens' fate.

Cutting through days of dense diplomatic talk about the state of negotiations between struggling Greece and its international creditors, Tusk said it was time for Greek Prime Minister Alexis Tsipras to stop biding for time with unworkable demands. "The Greek government has to be, I think, a little bit more realistic," Tusk said.

For months, Greece has wrangled with its creditors over the release of the remaining funds in its bailout. Without the 7.2 billion euros ($8.1 billion) available, Greece faces imminent bankruptcy, putting up capital controls and even leaving the euro. "The days coming, I am afraid that someone says that the game is over," Tusk said. The eurozone's finance ministers, calling known as the eurogroup, meet in Luxembourg in a week's time, in a meeting that according to Tusk "should be decisive." By the end of the month, Greece has a big repayment to make to the International Monetary Fund.

EU Commission President Juncker also said it was time to push up the gears. "You have to get the cow off the ice, where it keeps on slipping. We are trying to push it off again now," Juncker said ahead of a meeting with Tsipras. Hopes of progress have swelled after German Chancellor Angela Merkel said Athens had committed to resolve the impasse with creditors in coming days.

Stock markets across Europe have rallied, particularly in Greece, as officials sounded optimistic that a deal could be reached in time for next week's meeting. The Athens stock exchange was up 7.1 percent in midday trading while the Stoxx 50 index of leading European shares rose 0.9 percent.

The creditors have made clear that Greece must improve its offer of reforms that are needed in return for the bailout loans. Sticking points appear to center on pensions and changes to labor market rules. Merkel said that in overnight talks with Tsipras a clear consensus emerged that "Greece will now work emphatically and at full steam with the three institutions in coming days to try to clear up all the outstanding issues." Merkel expressed "hope that the necessary progress can now be made," and underlined that "each day counts."

Tsipras also spoke of the urgency required following his overnight meeting with Merkel, Juncker and French President Francois Hollande. "We decided to intensify the effort to bridge the remaining differences," he said.

Over the past few weeks there has been increasing gloom surrounding the talks with a notable lack of progress being reported. The failure to secure a deal triggered fears that Greece could default on its debts and drop out of the euro, a move that would create huge uncertainty for Europe and global markets.

The head of Germany's central bank, Jens Weidmann, said time is running out for a deal, and the risk of insolvency is increasing by the day. "The contagion effects of such a scenario are certainly better contained than they were in the past, though they should not be underestimated," he said in a speech in London. "But the main losers in that scenario would be Greece and the Greek people."

Amid the uncertainty, Greece's economy has slipped back into recession, while figures released Thursday showed that unemployment increased in the first quarter, reaching 26.6 percent compared to 26.1 percent at the end of last year. And deputy health minister, Andreas Xanthos, warned that Greece's under-staffed, under-funded public health system faces "very serious problems" at the end of the year unless a bailout deal can be struck soon. Piling new pressure on Athens, Standard & Poor's in New York downgraded Greece's credit rating one notch further into junk territory on Wednesday, saying it's likely the country will default on its commercial debt within a year if it can't strike a deal.

Standard & Poor's downgraded Greece's credit rating one notch further into junk territory, saying it's likely the country will default on its commercial debt within a year if it can't strike a deal with its creditors. Greece has shown it is giving higher priority to its pensions and other domestic spending than making debt payments on time, the rating agency said. S&P lowered Greece's rating to "CCC" from "CCC+" with a "negative" outlook. The move reflects "our opinion that in the absence of an agreement between Greece and its official creditors, the Greek government will likely default on its commercial debt within the next 12 months," the agency said in its report.

S&P said that money is flowing out of Greece's banks, which are dependent on the European Central Bank for financial support. Those outflows could ultimately force the country to block that money from leaving the country, the ratings agency said, precipitating an exit from the euro zone. In addition, any agreement between Greece and its creditors in the next two weeks would likely only provide temporary relief, covering payments for the next three months, S&P said.
Last Update: Jun 11, 2015 11:37 pm
RELATED TOPICS