Tsipras: Greece will wait patiently until the creditors get realistic 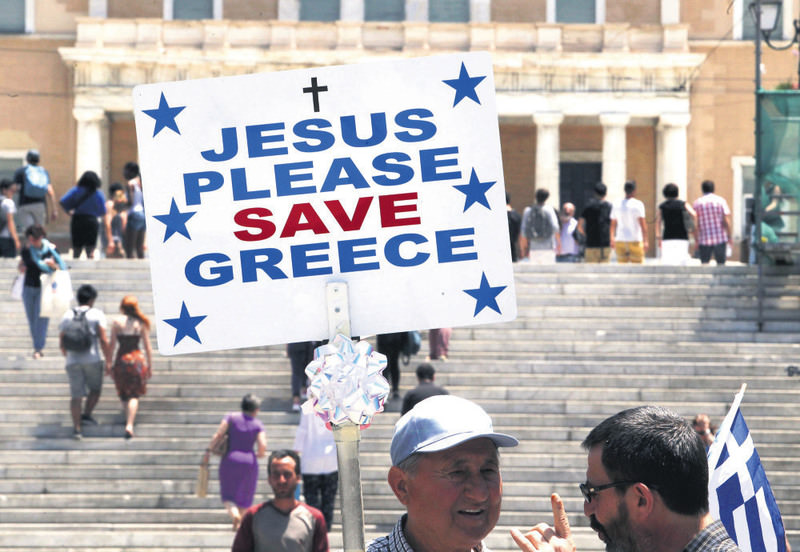 A man holds a placard reading u2018Jesus Please Save Greece' in the main Athens Syntagma Square, opposite the Greek Parliament. Greek PM Tsipras has urged the country's creditors to get realistic a day after weekend negotiations.
by Daily Sabah with DPA Jun 15, 2015 12:00 am

Greek talks froze after the IMF's rejection of a Greek proposal to reduce military spending, Athens now has just two weeks to find a solution to the deadlock before it faces a 1.6 billion euro bill due to the IMF

Greek Prime Minister Alexis Tsipras has urged the country's creditors to get realistic a day after weekend negotiations failed to bridge major differences, setting the stage for eurozone finance ministers to make a final push to reach a deal to avert a default.

Tsipras accused the institutions involved in the country's bailout negotiations of "political expediency" regarding their insistence on pension cuts. He said: "We do not have the right to bury European democracy at the place where it was born."

Speaking to Greece's Efimerida ton Syntakton newspaper after the breakdown in bailout talks, Tsipras emphasized that the Greek government has submitted counter-proposals. He said the Greek government would wait "patiently" until the country's creditors - the European Commission, European Central Bank and the International Monetary Fund (IMF) - become "realistic."

The negotiations between Greece and its creditors collapsed on Sunday. Greece suggested a decrease in pension cuts by creating sources around 400 million euros reducing military spending. However, the IMF did not accept Greece's offer and ended the talks.

The reason why the IMF rejected this offer is that it did not want any exchange within the budget. The sources close to the negotiations underline that there has been tension between IMF and European Commission for a while.

Athens now has just two weeks to find a solution to this deadlock before it faces a 1.6 billion euro bill due to the IMF, which is going to leave it out of cash. Tsipras said: "We will wait patiently until the institutions accede to realism. We do not have the right to bury European democracy at the place where it was born." Eurozone finance ministers will meet on June 18 once more.

Meanwhile, Greek Minister of Finance Yanis Varoufakis told Sto Kokkino radio: "What happened yesterday was that Greece said this far and no further." Yet he also seemed optimistic about the negotiations and added: "Let's see it from a positive perspective, realistically, today is a good day, things are more crystal clear."

The comments came ahead of a crucial meeting of eurozone finance ministers on Thursday when further talks on Greece's finances are to take place and just two weeks before an IMF debt repayment deadline and the expiry of the European part of the country's bailout. Fears are mounting that Greece will soon run out of money, with no agreement yet on reforms that the country would have to implement in exchange for access to 7.2 billion euros in remaining bailout funds.

Despite some convergence in the fiscal targets, Athens has rejected its creditors' demands for new cuts in wages and pensions, which are among key sticking points in the negotiations. Other thorny issues include value-added tax rates for different categories of goods and services and labor market reforms.
Last Update: Jun 15, 2015 9:41 pm
RELATED TOPICS