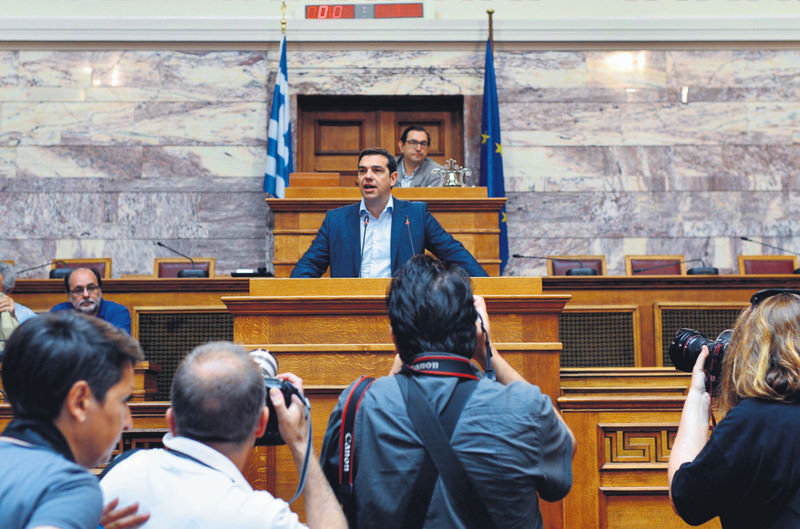 Greek PM Tsipras addresses lawmakers during a parliamentary group meeting at the Greek parliament in Athens yesterday.
by Daily Sabah with AFP Jun 16, 2015 12:00 am

Greek Prime Minister Tsipras accused international creditors of trying to ‘humiliate' the country and called on Europe to reconsider its support of harsh IMF reform proposals, which he said had a "criminal responsibility"

Greek Prime Minister Alexis Tsipras said yesterday that the International Monetary Fund (IMF) had "criminal responsibility" for Greece's debt crisis and called on the country's European creditors to assess the IMF's policies. "The time has come for the IMF's proposals to be judged not just by us but especially by Europe," Tsipras told his parliamentary group, two days after the failure of debt talks with the IMF and the European Union brought Greece closer to a possible default. "The IMF has criminal responsibility for today's situation," he said.

Acrimonious talks over the past five months have seen the fund insist on further cuts to Greece's pension system and a rise in value-added tax on basic goods like electricity, which Athens says will only deepen hardships for ordinary Greeks. "Right now, what dominates is the IMF's harsh views on tough measures, and Europe's on denying any discussion over debt viability," Tsipras said. "The fixation on cuts ... is most likely part of a political plan... to humiliate an entire people that has suffered in the past five years through no fault of its own," he said. "The time has come for the IMF's proposals to be judged in public ... by Europe," he told the deputies of his Syriza party.

Greece says it will not offer new reform

Greece is not planning to offer new reforms in the Eurogroup meeting that is going to be held this week, Greek Minister of Finance Yanis Varoufakis said. Despite the warnings from the creditors, the Greek government seems unlikely to take another step toward an agreement. Talking to Germany's Bild newspaper, Varoufakis said that the meeting of eurozone finance ministers was not an appropriate platform to negotiate new offers that have never been discussed before. Tsipras, on the other hand, is continuing to address harsh comments from creditors. Tsipras says that Greece's creditors - the European Commission, European Central Bank and IMF - are the ones who should offer a new plan, not Greece. Meanwhile, European Central Bank head Mario Draghi told the European Parliament Committee on Economic and Monetary Affairs that Greece and its creditors should make a solid and credible agreement within a very short time and liquidity to help Greek banks would continue. "Liquidity will continue to be extended as long as Greek banks are solvent and have sufficient collateral," Draghi said, adding: "Of course, the situation is evolving and we'll have to monitor the situation very closely and to see whether the conditions for the assessment of the collateral are still in place and more generally on the health of the banking system." The negotiations between Greece and its creditors collapsed on Sunday. Greece has to make an agreement before the end of June, the date that Greece is supposed to pay 1.6 billion euros to the IMF.
Last Update: Jun 16, 2015 10:42 pm
RELATED TOPICS