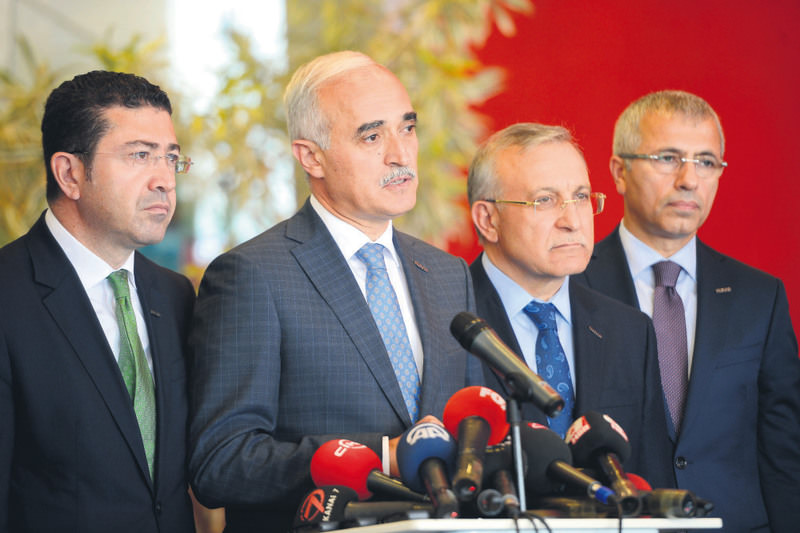 On the second day of their tour, Turkey's business leaders urged parties to find a conciliatory path to form a coalition government as soon as possible to prevent any damage to the economy

The business sector has become an increasingly vocal advocate of a coalition government, with leading business organizations intensifying meetings and outreach with the leaders of the four political parties that entered Parliament in the June 7 election. Nongovernmental organizations (NGOs) are speeding up their visits to political parties after the general elections as well. Trade bodies and other NGOs, including civil servant unions, continued their visits yesterday. A panel of members visited Prime Minister and ruling Justice and Development Party (AK Party) leader Ahmet Davutoğlu on Tuesday and met with the Republican People's Party (CHP) leader Kemal Kılıçdaroğlu yesterday. "The new government must start to work as quickly as possible. A ship cannot be left without a captain while waves are rising on the horizon. We all are in the same boat. Everybody should act responsibly, prudentially and moderately... Otherwise, the bill of the economic and social cost, which will appear, is going to be very heavy for our country and the nation," said TOBB head Rifat Hisarciklioğlu after the meeting. He was speaking on behalf of a group mainly composed of representatives of a wide range of labor and trade unions as well as members of the EU-Turkey Joint Consultative Committee. Accordingly, executives from the Turkey Tradesmen and Artisans' Confederation (TESK), the Turkish Union of Agricultural Chambers (TZOB), the Confederation of Turkish Labor Unions (Türk-İş), the Confederation of Turkish Real Trade Unions (Hak-İş), the Confederation of Public Servants' Trade Unions (Memur-Sen), the Turkish Public Workers' Labor Union (Kamu-Sen) and the Turkish Confederation of Employers' Unions (TİSK) all accompanied Hisarcıklıoğlu. 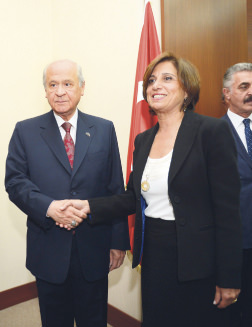 The first stop in Ankara by board members of the country's top business organization, the Turkish Industry and Business Association (TÜSİAD), was the headquarters of the CHP on Tuesday. "We have conveyed the business world's request for the urgent formation of a government," TÜSİAD head Cansen Başaran-Symes told reporters after meeting Kılıçdaroğlu and party executives, as well as Nationalist Movement Party (MHP) leader Devlet Bahçeli, who she met later in the day. "As a civil society organization, we are not here to be part of the formation of a government. But during our meeting with the CHP, we conveyed our request for the rapid forming of a government with a conciliatory culture prevailing among politicians," Symes stressed. The same delegation held a meeting with Davutoğlu on Wednesday, as well as the co-chairs of the Peoples' Democratic Party (HDP). After the meeting with the prime minister, Symes said they conveyed the business world's priorities to Davutoğlu and the other parties. Symes added that Davutoğlu stressed the preferential transformation of the 10th Development Plan and confirmed the government's commitment to support the business world. 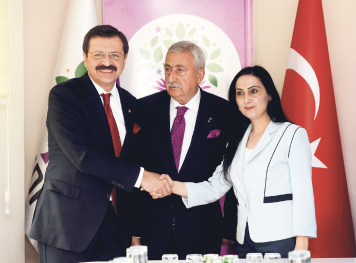 Amid such traffic in the capital, a delegation from the Independent Industrialists' and Businessmen's Association (MÜSİAD) met with Davutoğlu, Kılıçdaroğlu and HDP Co-Chair Selahattin Demirtaş Wednesday. MÜSİAD head Nail Olpak said, "The nation said its final word and we have to respect it. From now on, it is time for politicians to say their [the nation's] words." He also stressed they had put forward their ideas and expressed their demands from the new government, but this was not done with the aim of interfering in the inner political mechanisms.

When asked what he thinks about the conflicting principles of the political parties, Olpak said: "Different parties mean different opinions and promises, but a coalition means conciliation. As a business community, we think groups that will move Turkey forward should be brought together. The priority is to form a coalition among the four political parties. The nation expects the same. We believe they should sit around the table sincerely for the purpose of conciliation."

MÜSİAD's views after the June 7 vote were already outlined at a meeting over the weekend. "The parliamentary makeup that emerged after the election hasn't enabled any party to form a government on its own," it said in a press release after their meeting, adding that they regarded such a situation as a chance for all parties to engage in "self-reflection."
Last Update: Jun 18, 2015 8:46 am
RELATED TOPICS