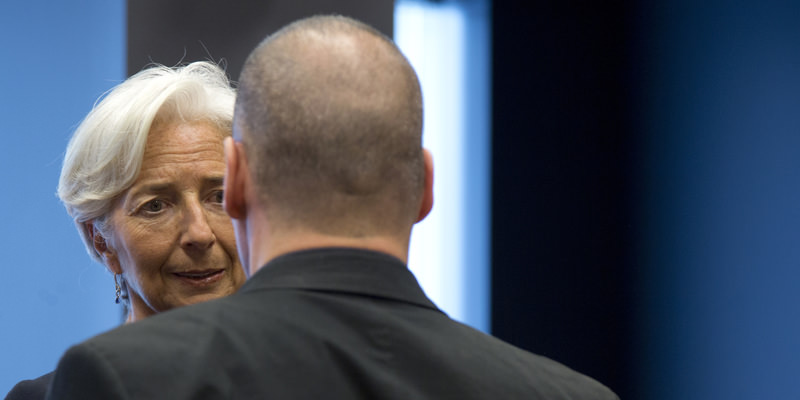 by Compiled from Wire Services Jun 18, 2015 12:00 am
Greece and its creditors must strike a deal in the next three days so that European leaders can make a decision when they meet at an extraordinary summit on Monday, a senior French diplomat said on Thursday.

"The next three days must be used to finalise an agreement between the institutions and Greece so that it can be submitted to EU leaders at the Monday summit," he said. "The situation shows that now is the time to find an agreement."

On Thursday, the debt talks to resolve a five-month standoff between Greece and its EU-IMF creditors ended without a deal, Valdis Dombrovskis, the European Commission vice-president for the euro announced.

"No deal at Eurogroup," Dombrovskis said in a tweet after the talks broke up after 90 minutes of discussion on Greece.

"Strong signal for Greece to engage seriously in negotiations. The Eurogroup stands ready to reconvene at any moment," he added.

Fears are mounting that cash-strapped Greece will soon go bankrupt. It is seeking to access 7.2 billion euros (8.2 billion dollars) remaining in its international bailout, but has been struggling for months to agree with its creditors on prerequisite economic reforms.

Time is running short as the European part of the country's bailout is due to expire at the end of this month. If no agreement is reached by then, the country could lose access to the rescue aid altogether.

Greece also has to make a 1.6-billion-euro payment to the International Monetary Fund (IMF) on June 30. The country will not be granted any leeway, IMF chief Christine Lagarde warned Thursday.

"June 30 is the day when the lump-sum payment is due to the IMF, and there is no grace period or two-month delay, as I have seen [reported] here and there," Lagarde told journalists before joining the finance ministers' meeting in Luxembourg.

Greek Finance Minister Yanis Varoufakis had told journalists that he would be presenting his governments' "ideas" in Luxembourg, but it was not immediately clear if new proposals were put on the table.

"The purpose is to replace costly discord with effective consensus," Varoufakis said.

The country's lead negotiator, Euclides Tsakalotos, had earlier told the BBC programme Today that "further compromises can be made," but that anything agreed "must be economically feasible."

The current crisis in Greece, a follow-up chapter of the European debt crisis, stems from excessive and mismanaged government borrowing. The main problem on behalf of the Greek government is borrowing new funds in order to keep its functions running, however, Greece's credibility has sunk in the last five years.

The country is rated an average CCC with a negative outlook by the big three credit rating agencies, Fitch, Standard & Poor's and Moody's, as an economy that carries substantial risks. As of March 2015, the country's unemployment rate stood at 25.6 percent - the highest in Europe and one of the highest in the world.

Almost all data from Greece shows a declining figure, besides its debts. The country's gross national income (GNI) decreased from $325.1 billion in 2009 to $250.2 billion in 2013 while its GDP decreased from $329.8 billion to $242.2 billion in the same period. The services sector makes up around 80 percent of Greece's GDP while 74 percent of its labor force working in the services sector, which has an important role in domestic spending. Moreover, Greece's per capita GNI decreased from $29,720 to $22,960 in the same period, and even the country's population decreased by 160,000, from 11.18 million to just above 11 million.

Although Greece's exit from the eurozone has been constantly repeated as an option, it is an unlikely option not for Greece but for all euro countries. Abandoning a struggling member of a common currency will damage the reputation and future the euro, which would hurt all European economies. Naturally, Greeks have suffered the most from this crisis, and asking them for further concessions will add fuel to an already close social tipping point. Additionally, further cuts to government payrolls and pensions will further shrink the Greek economy and workforce.