Never-ending round of meetings fail to instill hope 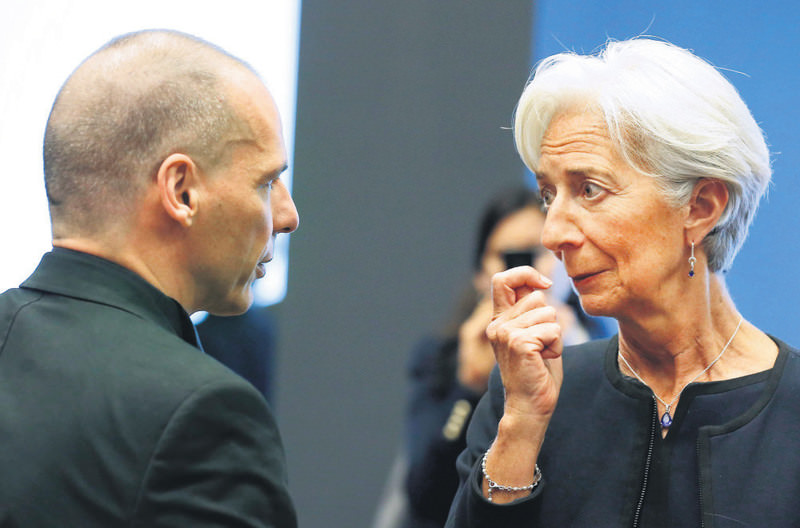 Greek Minister of Finance Varoufakis (L) and IMF Managing Director Lagarde (R) at the start of the Eurogroup meeting of finance ministers in Luxembourg.
by Daily Sabah with AP Jun 18, 2015 12:00 am

German Chancellor Merkel still has hope for a deal between Greece and its lenders, but everyone is not on the same page. With Greece fast approaching a potential default on June 30, ‘Grexit' is being discussed by some

Optimism was in short supply over the prospects of a deal yesterday that might prevent Greece's bankruptcy, as officials headed into a keenly awaited meeting of eurozone finance ministers. German Chancellor Angela Merkel said a deal between Greece and its lenders is possible if the Greek government showed the necessary will, as the Eurogroup – an informal body where the ministers of eurozone member states discuss matters relating to their shared responsibilities concerning the euro – meets in Luxembourg.

However, not every party of the conflict was as hopeful as Merkel. The very same day, Greek Prime Minister Alexis Tsipras described the lenders' request to cut pensions as "blind insistence" in an interview with a German newspaper.

"I don't have a lot of hope," Eurogroup chief and Dutch Minister of Finance Jeroen Dijsselbloem said as he announced the deal awaits the next step from Greece. Meanwhile, Greeks held rallies in Athens to support Tsipras and keep Greece in the eurozone.

With Greece fast approaching a potential default on June 30 and amid signs that Greeks are withdrawing money from their banks, officials acknowledged that a Greek exit, commonly referred to as Grexit, from the eurozone was now being discussed by some. The fraught negotiations concern the release of the last 7.2 billion euros in rescue funds of Greece's massive bailout from the International Monetary Fund (IMF), European Commission and European Central Bank (ECB).

Also at the end of the month, Greece faces a 1.6 billion euro payment to the IMF, with another 6.7 billion euros due to the ECB in July and August, which Greek officials have said the government cannot afford.

The Greek government wants an end to the budget austerity measures that have accompanied the country's bailout loans for five years. It has also been seeking some sort of restructuring of the country's sky-high debt burden, which stands at nearly 180 percent of its annual gross domestic product (GDP). That could take the form of lower interest rates on the debt or extending the date by which the debts have to be repaid.

The current crisis in Greece, a follow-up chapter of the European debt crisis, stems from excessive and mismanaged government borrowing. The main problem on behalf of the Greek government is borrowing new funds in order to keep its functions running, however, Greece's credibility has sunk in the last five years. The country is rated an average CCC with a negative outlook by the big three credit rating agencies, Fitch, Standard & Poor's and Moody's, as an economy that carries substantial risks. As of March 2015, the country's unemployment rate stood at 25.6 percent - the highest in Europe and one of the highest in the world.

Almost all data from Greece shows a declining figure, besides its debts. The country's gross national income (GNI) decreased from $325.1 billion in 2009 to $250.2 billion in 2013 while its GDP decreased from $329.8 billion to $242.2 billion in the same period. The services sector makes up around 80 percent of Greece's GDP while 74 percent of its labor force working in the services sector, which has an important role in domestic spending. Moreover, Greece's per capita GNI decreased from $29,720 to $22,960 in the same period, and even the country's population decreased by 160,000, from 11.18 million to just above 11 million. Although Greece's exit from the eurozone has been constantly repeated as an option, it is an unlikely option not for Greece but for all euro countries. Abandoning a struggling member of a common currency will damage the reputation and future the euro, which would hurt all European economies. Naturally, Greeks have suffered the most from this crisis, and asking them for further concessions will add fuel to an already close social tipping point. Additionally, further cuts to government payrolls and pensions will further shrink the Greek economy and workforce.
Last Update: Jun 18, 2015 8:32 pm
RELATED TOPICS