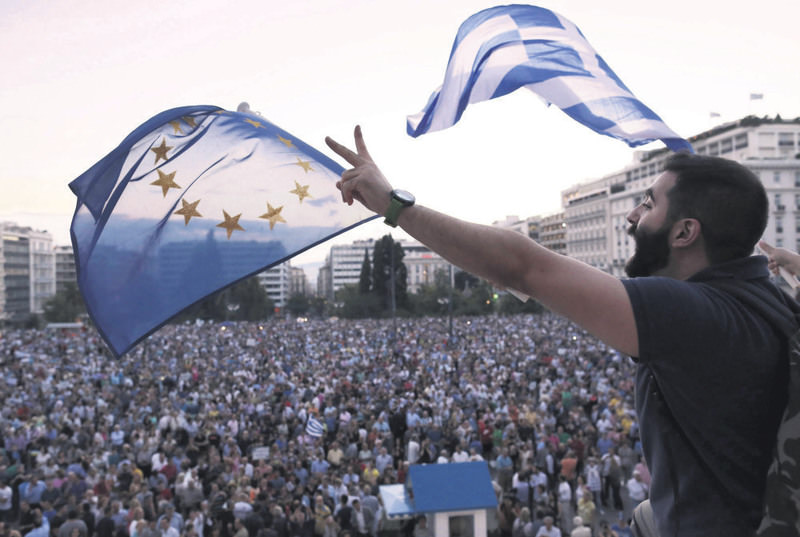 Demonstrators wave European and Greek flags as they stand in front of parliament in Athens on June 18.
by Anadolu Agency Jun 19, 2015 12:00 am

European finance ministers failed to reach a deal once again with concerns over Greek banks increasing amid claims they might not be able to open on Monday. The next of the never-ending meetings is to be held on Monday

Early Friday morning a report was leaked to Reuters claiming Greek banks might not be able to open Monday because they had so little left in funds, with the information reportedly coming from a Eurogroup finance minister.

Although the report has not been confirmed, it is clear that Greek banks are in trouble and close to failing, complicating the bailout crisis for Greek Prime Minister Alexis Tsipras, who will meet with other European leaders Monday in a last-ditch effort to find a solution.

"There has been a bank run on all Greek banks for some time now," Athens-based analyst George Kesarios explained in a note Monday. As is well-known, Greek banks have had to resort to the Bank of Greece for emergency liquidity under the Emergency Loan mechanism." On Thursday, as Greek Minister of Finance Yanis Varoufakis saw his proposals for Athens's bailout rudely rejected by the Eurogroup - an informal body where the ministers of eurozone member states discuss matters relating to their shared responsibilities concerning the euro - depositors pulled about 1 billion euros ($1.1 billion) in savings from the country's banks. This was after losing 850 million euros in deposits Monday and Tuesday and 800 million euro Wednesday.

Just as the banks have very little liquidity left, depositors are pulling out more and more funds. When the banks have no further funds to lend above reserves, they fail. "The question is, what might make depositors continue to lose faith in the Greek banking system, thus continuing the bank run and making these banks completely worthless? The answer is simple, Greece currently has a left-wing government [the first since World War II] and they are doing everything possible to make a very difficult situation even worse," Kesarios claimed. That is a harsh judgment, but one in which Greece's European creditors might subscribe.

At a press conference after the Eurogroup meeting Thursday, finance ministers from four countries as well as International Monetary Fund (IMF) Managing Director Christine Lagarde characterized Varoufakis's proposals as "not credible." They all used the same term. However, Lagarde went further: "We might reach a compromise if there were an adult in the room."

At the upcoming meeting on June 22, however, Varoufakis will not be present. Tsipras will work with other top leaders from the 19 countries in the eurozone in a last-ditch attempt to reach a compromise agreement.

On Friday, Tsipras told the press in Athens that "an accord is still possible. Everyone who is betting on a crisis will be proved wrong. There will be a solution based on the respect of EU rules and of democracy, one which will allow Greece to continue to grow within the euro system."

Greece has no wriggle room in regard to paying about $2 billion of its debts by the end of June. Lagarde warned Thursday. "The payments due by June 30 must be made on time or Greece slips into arrears and can no longer receive IMF funding."

A Greek default could cause uproar in financial markets around the world. For Athens, it almost certainly means that capital controls, of the type used in Cyprus in 2013, will be imposed by the European Central Bank (ECB). Capital controls limit the amount of funds businesses and consumers may take out of banks. The effect was such, in Cyprus, that tourists could not withdraw sums from ATMs while the controls were imposed. In an ominous move, the U.K. Post Office on Monday warned travelers to Greece to bring plenty of cash, as ATMs might not function when they arrive. The Bank of Greece also warned in a report last week of recession and crisis should Greece default. "The devaluation would be the last act of a dying economy, and would trigger a humanitarian crisis unseen since 1945," Saxo Bank economist Christopher Dembick said.
Last Update: Jun 19, 2015 8:02 pm
RELATED TOPICS