Greece says ready to compromise, calls on Merkel to decide 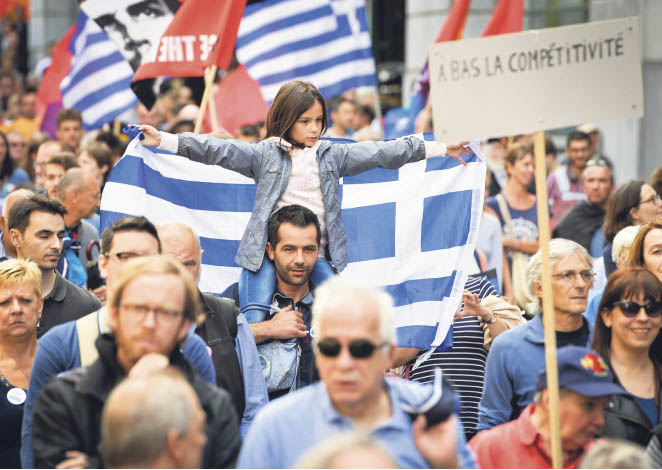 A government source close to the talks says Tsipras "presented to the three leaders Greece's proposal for a mutually beneficial agreement, which will provide a permanent solution and not just postpone tackling the problem." The source is not authorized to be named in the media. Tsipras has been meeting with his senior ministers all day and will leave for Brussels later Sunday. The governing Syriza party is holding an Athens rally later Sunday in support of the government that comes after a strong rally Thursday of those favoring a deal with the EU.

European Union heads are waiting for Greece's anti-austerity government to present new economic reform and budget proposals, and Greek Minister of State Alekos Flambouraris said on Saturday that Athens would propose reworked measures. The pressure has mounted on Greece ahead of an emergency summit of the leaders of the 19 eurozone countries today in Brussels. But Greek Minister of Finance Yanis Varoufakis turned the tables by putting the onus on the leader of paymaster Germany to make a deal.

Merkel can "enter into an honorable agreement with a government, which has rejected the 'rescue package' and is seeking a negotiated solution, or follow the calls from [those in] her government who want her to throw overboard the only Greek government which has been faithful to its principles and which is able to take the Greek people on the road to reform," Varoufakis said in an article to appear in the German press on Sunday.

German public opinion has soured on Greece after five months of contentious negotiations, with a recent poll showing 51 percent now believe Athens should leave the eurozone. But the leftist Greek government insists it will present compromises that should bring Athens and its creditors - the European Commission, International Monetary Fund (IMF) and European Central Bank (ECB) -- closer to agreement on freeing up 7.2 billion euros ($8.1 billion) in blocked bailout funds Greece desperately needs to meet looming debt payments to the IMF and ECB. 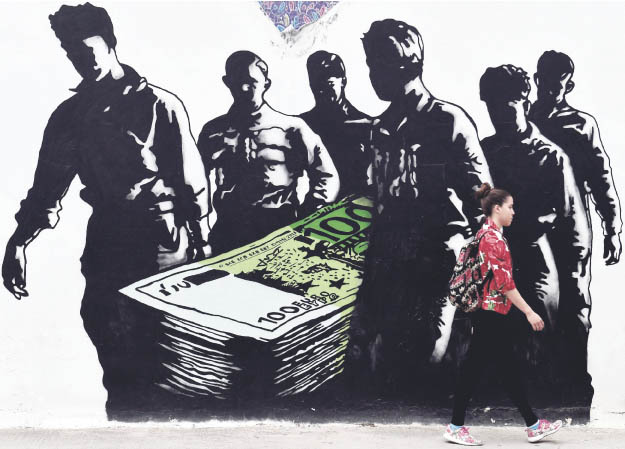 The Greek government wants an end to the budget austerity measures that have accompanied the country's bailout loans for five years. It has also been seeking some sort of restructuring of the country's sky-high debt burden, which stands at nearly 180 percent of its annual gross domestic product (GDP). That could take the form of lower interest rates on the debt or extending the date the debts have to be repaid.

"We are going to present measures that bridge the gap," Flambouraris was quoted as saying by Greek media. He also predicted Greece's creditors will not be satisfied with the gestures. "You'll see they won't accept loosening budget [restrictions] or our proposal on the debt," he said regarding two main sticking points in the talks.

If there is no deal, Greece seems likely to default on an IMF debt payment of around 1.5 billion euros due on June 30, and with that risk a chaotic exit from the eurozone.

That prospect appeared to be fueling the rising number of Greek savers withdrawing money from national banks. The rush of withdrawals forced the ECB on Friday to lift its emergency liquidity reserve available to Greek banks for the second time in a week.

Greek Prime Minister Alexis Tsipras will find his European peers waiting expectantly for breakthrough proposals at today's emergency summit. But Varoufakis said Athens also has expectations. "The German chancellor has a clear decision to make today," he wrote in an op-ed to be published Sunday in Frankfurter Allgemeine Zeitung. "On our side, we will come with determination to Brussels to agree to further compromises as long as we are not asked to do what the previous [Greek] governments have done: accept new debt under conditions that offer little hope for Greece to repay its debts," he wrote, without specifying the compromises.

US: Grexit would hurt Greek people

Amid growing global concern over a potential Grexit, U.S. Treasury Secretary Jacob Lew also weighed in, urging all sides to show flexibility to resolve the impasse. "It's clear that within Greece the consequence of a failure here would mean a terrible, terrible decline in their economic performance," he told CNN, and warned of the wider repercussions of a Greek default. "The reality is that there are impacts on markets. And I don't think anyone should want to find out," he said of the prospect of Greece leaving the eurozone.
Last Update: Jun 21, 2015 7:51 pm
RELATED TOPICS