No end to Greece's problems even with bailout funds 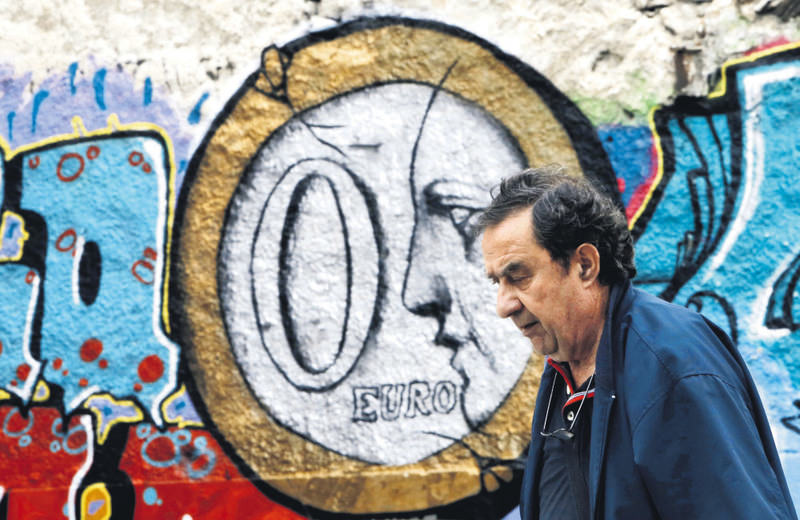 A man walks in front of a wall covered with graffiti depicting a zero euro coin in central Athens yesterday.
by Daily Sabah Jun 22, 2015 12:00 am

Eurozone finance ministers have failed to reach an agreement once again, saying no substantive proposals have been made. However, Greece's problems will not be solved forever with the last part of its bailout

European officials were cautious about the prospects of reaching a comprehensive deal yesterday to keep Greece from defaulting and falling out of the currency union, despite optimism in the financial markets. On the other hand, Greece needs permanent solutions rather than a part of its bailout.

A meeting of eurozone finance ministers to prepare the ground for a leaders summit on Greece on Monday has ended without an agreement and another round of talks is expected in the coming days, officials said. "Eurogroup ends. Work continues. Institutions assess proposals," Finnish Minister of Finance Alexander Stubb said in a tweet. Valdis Dombrovskis, the European Commission vice president for the euro, added: "Eurogroup to reconvene this week. We need a deal in coming days."

Eurogroup leaders held an emergency summit yesterday, after Daily Sabah went to print. Ahead of the summit in Brussels, German Chancellor Angela Merkel warned against expecting too much on Monday, saying "there are still a lot of days left to reach a decision." After yesterday's meetings of eurozone finance ministers and European leaders, another leaders' summit is planned for Thursday and Friday.

Greece needs more loans from its creditors, which include its fellow eurozone states and the International Monetary Fund (IMF), in time for June 30, when it faces a debt repayment it cannot afford. The country has been negotiating for four months what economic reforms it should make in order to receive the money.

Greece has been trying to convince its creditors with a reform package to release the last 7.2 billion euros in rescue funds of the country's massive bailout from the IMF, European Commission and European Central Bank (ECB), however Greece's problems will not be solved forever with this payment. The money would only cover its debt repayments for a few months. So Greece and its creditors need to find a longer-term solution. Because most of Greece's debts consist of bailout loans, the country would be helped if its creditors agreed to make the terms of those loans easier, either by reducing the interest Greece has to pay on them or extending their repayment date.

Creditors had promised last year to consider this. But they say a decision can be taken only after Greece has fulfilled the reforms demanded in exchange for the 7.2 billion euros in loans. Greece wants such a decision on lightening its debt terms now.

The Greek government must make a 1.6 billion euro loan payment to the IMF this month. But it does not have the money. It is negotiating with other eurozone countries and the IMF to get 7.2 billion euros in loans — the last installment in a bailout package expiring this month. Without that money, Greece will likely default on the IMF loan. Even bigger payments come due later this summer like 6.7 billion euros to the ECB in July and August. Its creditors are demanding that Greece make reforms and cuts, including to public pensions, before releasing the money.

The risks of default are that it could unsettle confidence among Greeks and cause bank runs. The banks are currently supported with emergency credit allowed by the European Central Bank. If Greece can't pay its creditors, the government debt lenders use as collateral for their ECB loans would become worthless and the ECB could withdraw its support. Greece would have to then support the banks itself but it doesn't have the money to do so. It would theoretically then have to start printing its own money to get cash flowing through the economy again. Doing so, it would effectively be leaving the euro.

Jeroen Dijsselbloem, who heads the eurozone meetings of finance ministers, said it would be impossible to get "a final assessment" on Monday.

Ahead of the meetings, Greek Prime Minister Alexis Tsipras made new proposals on the economic reforms and budget cuts his country would accept. European Commission President Jean-Claude Juncker said they were a sign of progress but warned that "we are not yet there."

No details of the proposals were made public, but investors were hopeful that they represented a long-awaited compromise. The Athens stock index was up 6.4 percent while Stoxx 50 of top European shares was 2.9 percent higher.

Despite the market rally, tension was palpable in Greece, where people flocked to cash machines to withdraw money. The concern is that a debt default by Greece could destabilize the country enough that it might have to eventually leave the euro.

To support Greek banks in the face of growing money withdrawals, the European Central Bank increased the amount of emergency credit it allows the banks to draw on, a banking official said. The official, who spoke only on condition of anonymity because the decision had not been made public, said the ECB remains on call in the coming hours and days to revise the amount of credit to Greek banks.

Reports indicate Greeks withdrew about 4 billion euros last week. "Everyone's going (to the banks) to take money," said Yannis Nikolopoulos in Athens. He said people are taking "money to have at home for 10, 15 days say 1,000, 500 euros because if the banks shut it'll be a problem to go shopping and that sort of thing." He said that a deal between Greece and its creditors "is mandatory at all costs, otherwise we're doomed."

An exit from the euro would be hugely painful for Greeks, plunging the country back into a deep and long recession. Experts are more divided about its effects on Europe and the world economy. Some say it would be manageable, but others note there is huge uncertainty. Several European countries have said publicly they are getting prepared for such an eventuality. Since coming to power in January, the new government has refused to make more budget austerity measures, which it blames for devastating the economy. It has since softened its approach, but it remains reluctant to take the steps creditors demand. Over the past weeks, the creditors have often complained that Greek proposals on what kind of reforms they would implement have been too slow to come and far too vague.

German Finance Minister Wolfgang Schaeuble said Monday that despite the new Greek plan, "we have so far received no substantive proposals... That is why we are unable to provide adequate preparation" for Monday night's summit, he said.