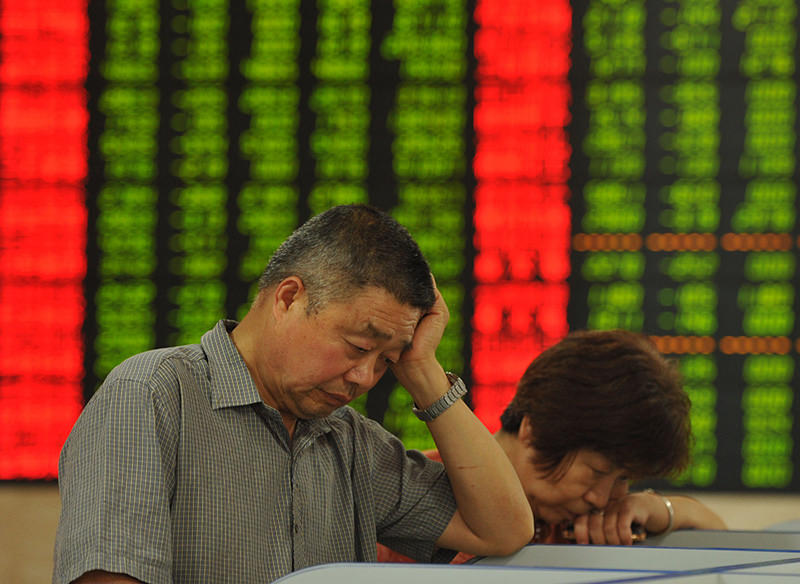 This photo taken on June 26, 2015 shows investors checking the share prices in a stock firm in Fuyang, east China's Anhui province (AFP Photo)
by daily sabah
Jun 28, 2015 12:00 am
A total of 83 countries, among which were also the world's biggest economies such as the U.S., Germany, Japan, and U.K., went bankrupt in the last two centuries.

When a country goes bankrupt, the most basic systems and institutions disappear. Power companies stop their operations, gas stations close, grocery stores run out of food, banks close their doors, and the government is unable to pay salaries to its civil servants.

Today we still see a number of nations on the verge of such a bankruptcy. The average Greek income, for example, has fallen 40% in the past five years. Eurozone finance ministers, however, on Saturday rejected a Greek request to extend its bailout into July, raising the questions if Greece will soon declare its bankruptcy.

Although not commonly known, the U.S. has declared bankruptcy five times, since its foundation. Once it could not pay its foreign debts, and four times could it not pay its internal debts. These bankruptcies had resulted from financial crises in the banking sector, the first of which was in 1790, and the last of which was in 1933.

Germany, on the other hand, went bankrupt eight times in the last 215 years. Currently the world's fourth and the EU's biggest economy, Germany had gone bankrupt last in 1939 and 1948, due to the second World War. But, the country is now an economic success due to its tight monetary policies.

The world's fifth biggest economy, the U.K., went bankrupt four times in total, the last of which was in 1932.