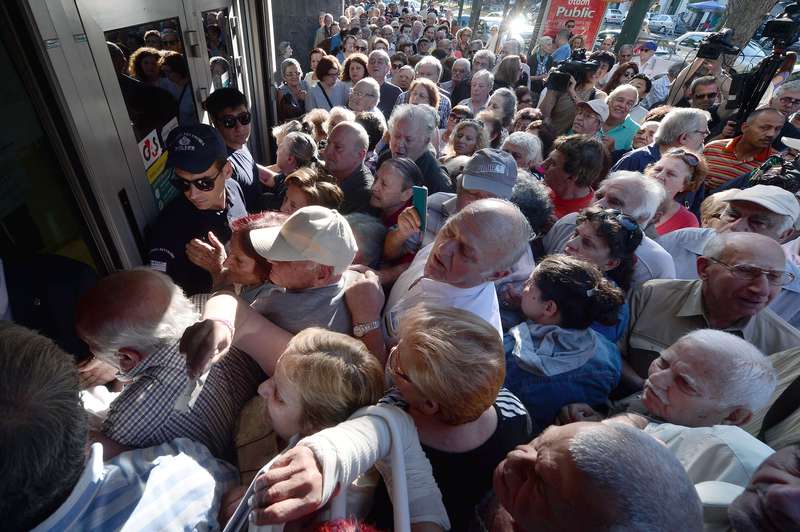 by Jul 01, 2015 12:00 am
In chaotic scenes, thousands of elderly Greeks on Wednesday besieged the nation's crisis-hit banks, which reopened to allow them to withdraw vital cash from their state pensions.

"Let them go to hell!" shouted one pensioner, after failed talks between Athens and international creditors sparked a week-long banking shutdown.

Prime Minister Alexis Tsipras ordered the banks to close on Monday for one week and imposed strict capital controls to head off a banking collapse after panicking Greeks emptied the nation's cash machines.

Athens has now reopened almost 1,000 bank branches for three days to allow pensioners without cards withdraw 120 euros ($133) to last them the rest of the week.

Under banking restrictions imposed all week, ordinary Greeks can withdraw up to 60 euros a day for each credit or debit card -- but many of the elderly population do not have them.

Pensioners with cards will not be eligible for the 120 euros withdrawal, because they can already withdraw significantly more cash per day via the ATM.

The move has again sparked lengthy queues at banks across Greece -- and outrage from many retirees who are regarded as among the most vulnerable in society, exposed to a vicious and lengthy economic downturn.

"I took the money out. I know that this is not enough, but that's what I could take and so I took it," said Dyonisia Zafiropoulou, a former employee of the national electricity company DEI.

She said she was convinced Greece could weather the financial crisis.

"I lived during the Occupation, I experienced hardship and I think we will overcome this moment," she told AFP.
Another customer, a retired sailor who also asked not to be named, told AFP he had no cash to buy crucial medicine for his sick wife.

"I took out 120 euros -- but I have no money for medication for my wife, who had an operation and is ill," he added.

Retired Greeks traditionally draw their pensions in cash from their local bank.
"Each month the money is paid normally -- but not this month," said a retired employee of the Bank of Piraeus.

Pensioners must now eke out their cash until next week.

"I will spend less than" 20 euros per day, said one man queueing at a National Bank of Greece branch in Athens.

In Greece's second biggest city, Thessaloniki, a group of about 200 pensioners staged a protest outside the National Bank of Greece.

The country's crisis-hit economy has buckled under the weight of around six years of recession and accompanying austerity measures demanded by a series of international bailouts, both under Tsipras and his predecessor Antonis Samaras.

"I feel shame for my country. They are all responsible, both Samaras and Tsipras," another pensioner told AFP in Thessaloniki.

Greece's generous state pension system is at the heart of fraught talks between Athens and its creditors.

The nation's European and International Monetary Fund (IMF) creditors argue that the public pension system is simply too expensive and unsustainable.

Tsipras however contends that his recession-hit nation can ill afford cutbacks, and also faces fierce domestic pressure from his radical leftist Syriza party that came to power in January.

"I suspect that things are not going well, when one constantly imposes restrictions like this. God help us," added another pensioner.