Most Greeks expected to vote 'no' to bailout in referendum 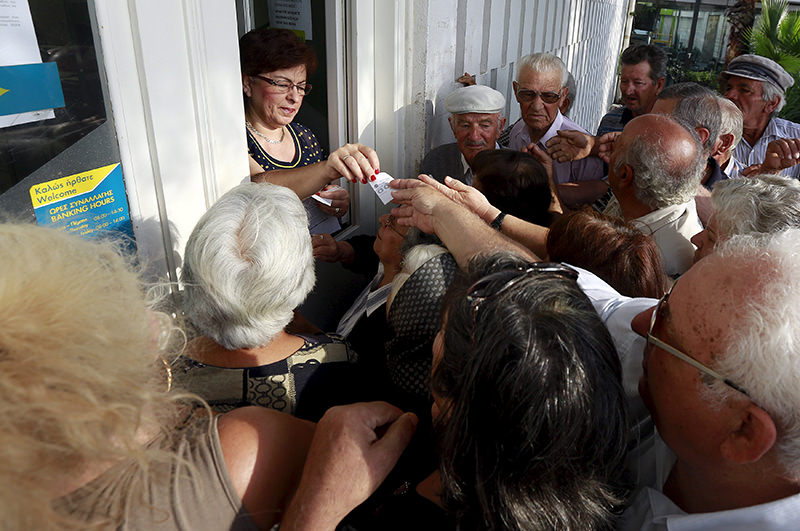 Pensioners scuffle to get priority tickets from a bank staff member as they wait to collect part of their pensions on the Greek island of Santorini, Greece (Reuters Photo)
by Jul 01, 2015 12:00 am
Most Greeks responding to a poll say they would vote 'no' in this weekend's referendum on the terms of its bailout, according to results published Wednesday, but the data also shows the yes vote gaining ground.

The figures come as Athens prepares to discuss its latest proposals for a new programme with the eurozone finance ministers in a teleconference.

The survey by ProRata for Greece's Efimerida ton syntakton newspaper showed that the percentage of those planning to vote 'no' stood at 46 per cent, while the 'yes' vote stood at 37 per cent.

The results reflect attitudes after the introduction of capital controls and the closure of banks, amid increasing uncertainty about the country's future in the eurozone.

They also mark shifts from polling data taken before this week's bank closures. Before capital controls, the responses showed 57 per cent backing a 'no' vote and 30 per cent planning to vote 'yes.'

It also reported that half of respondents said they backed the decision by Prime Minister Alexis Tsipras to call the Sunday referendum.

The survey was published hours after Athens missed the deadline for a 1.6-billion-euro (1.8-billion-dollar) debt repayment to the International Monetary Fund (IMF) that was due at the end of June, the same day the European part of Greece's bailout expired.

The referendum will decide whether voters approve or reject a bailout proposal submitted by Greece's creditors - the European Commission, the European Central Bank (ECB) and the IMF - on June 25.

Meanwhile, long queues formed in front of several banks, which opened their doors to pensioners Wednesday after the Finance Ministry announced the day before that some Greek banks could reopen Wednesday through Friday for pensioners without debit or credit cards.

According to the ministry's statement, the branches will only serve pensioners and those who cannot withdraw money from automatic cash machines. They will be limited to withdrawals of 120 euros for the span of the three days.