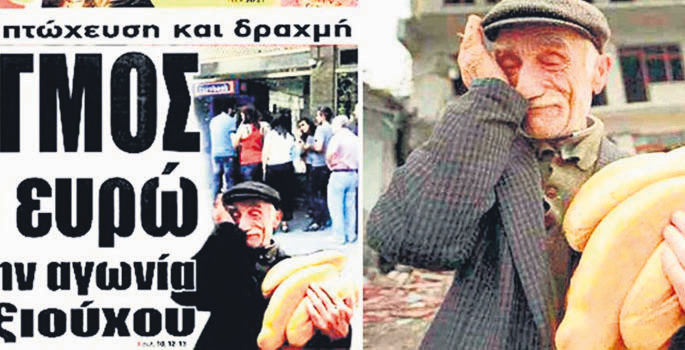 by Daily Sabah Jul 01, 2015 12:00 am
A Greek newspaper used a picture of the 1999 Düzce earthquake symbol "Uncle Eşref" in an article on the recent financial struggles of Greeks. Greece is in dire straits; the country is heading towards bankruptcy, and the Greek government can neither pay its debts to the International Monetary Fund (IMF) nor formulate a payment plan that satisfies both its creditors and its people. The austerity measures the creditors are trying to impose on Greece are to be voted on with a referendum on July 5. In the meantime, Greek banks are closed nationwide, people can only withdraw up to 60 euros from ATMs per day, credit cards are not being accepted as a payment method at many establishments and access to pharmaceutical products and petroleum is difficult.

In their headline article on Greece's financial situation, the Star newspaper used a photo where an elderly man is standing near an ATM queue, wiping his tears with one hand while holding several loaves of bread with the other. The picture was photo-shopped, however. The elderly man, known in Turkey as Uncle Eşref, was placed in the photo presumably to depict the difficulties the Greek people have been experiencing. Yet, Uncle Eşref's well-known photo was originally taken after the 1999 Düzce earthquake, while the old man was crying in front of the ruins of his house. The photo was captured by an Anadolu Agency reporter and later used as a poster in fundraising drives for Düzce victims. The photo was titled "the retired grandpa," and the old man was named Eşref Cengiz, who died in 2004.
Last Update: Jul 01, 2015 9:53 pm
RELATED TOPICS