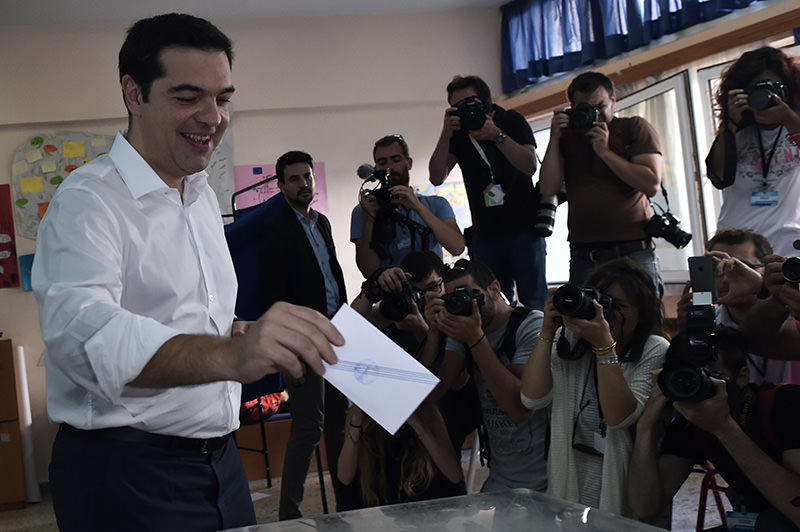 Greek Prime Minister Alexis Tsipras votes during the Greek referendum in Athens on July 5, 2015 (AFP Photo)
by Daily Sabah with Agencies Jul 05, 2015 12:00 am
Millions of Greeks have begun voting Sunday in a bailout referendum that will decide the country's future, with opinion polls showing people evenly split on whether to accept creditors' proposals for more austerity in exchange for rescue loans or defiantly reject the deal.

The vote, which some claim will also determine Greece's continued membership of the eurozone, will see around 10 million Greeks eligible to vote either "Yes" or "No" on proposals to raise taxes and cut spending from Greece's creditors the European Commission, the European Central Bank and the International Monetary Fund.

The polls opened at 7 a.m. local time and close 12 hours later, with the first official projection of the result expected at 9pm local time.

Greek Prime Minister Alexis Tsipras on Sunday said his debt-laden country was determined to decide its own "destiny" in the eurozone as citizens voted in the snap referendum he called.

"No one can ignore the message of determination of a people taking its destiny in its own hands," he said after casting his ballot in Athens.

Alexis Tsipras and Finance Minister Yanis Varoufakis have been at the fore of calls for a "No" vote, claiming it will give the government greater power in its negotiations with creditors and saying "yes" would mean capitulating to their harsh demands. Tsipras has told thousands of supporters that in Athens on Friday that a 'no' vote in Sunday's referendum would represent a choice to 'live in dignity in Europe', Reuters reported.

Polls published Friday showed the two sides in a dead heat and an overwhelming majority of people about 75 percent who wanted Greece to remain in the euro currency.
Last Update: Jul 05, 2015 11:53 am
RELATED TOPICS