Two choices and many possible results for Greece's landmark vote 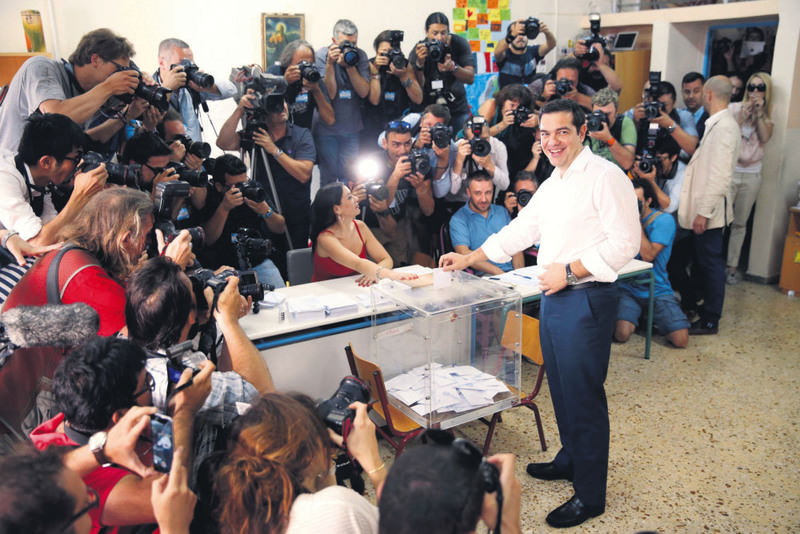 Greek Prime Minister Alexis Tsipras casts his ballot at a polling station in Athens on Sunday.
by Daily Sabah with Wires Jul 05, 2015 12:00 am

Despite being unsure about the possible results of saying ‘NAI' or ‘OXI', Greeks voted on their future in Sunday's referendum. In both cases, the process will be painful for the country

As the sun rose above Greece yesterday, young and old were already queuing to have their say in a referendum that could be a new dawn for their crisis-wracked country, or plunge its finances deeper into the red. The Greek people were voting on a future in which they face two painful prospects: the slow grind of years more of austerity cuts or the country's potentially catastrophic exit from the 19-nation eurozone. The question is whether their vote on Sunday can help them escape either. "Yes" to more budget cuts demanded by creditors in exchange for a financial aid package for the country? Or reject it in the hope it will not lead the country out of the eurozone?

The referendum results were expected to be announced late Sunday, after Daily Sabah went to print.

For the radical left-led Greek government, the proposals are unacceptable. It's urging a "no" vote and says that will have no impact on Greece's euro status.

Proponents of a "yes" vote, including a parade of former prime ministers and the main opposition party, say backing the government will jeopardize Greece's place in the euro. Instead, they argue that by voting "yes" Greece would get a new deal quickly to shore up the economy.

In fact, what might happen in each case is unclear. Here's a look at each possibility:

A "yes" vote backing the reform proposals creditors had made would likely see Greece turn to talks on a new rescue package, which will involve more austerity. Whether that leads to a swift deal that might allow Greece to reopen its banks and restore a semblance of normality is another question.

The government has said it will respect the verdict. Greek Finance Minister Yanis Varoufakis has said he'll resign in the event of a "yes" vote and Prime Minister Alexis Tsipras has hinted as much. If the government does not collapse, it could try to build a new coalition with other parties, Varoufakis hinted. Varoufakis was quoted as saying, "I'd prefer to cut my arm off" than sign a rescue deal that does not include a debt relief provision.

"If Greece crashes, a trillion euros (the equivalent of Spain's GDP) will be lost. It's too much money and I don't believe Europe could allow it," Varoufakis told Spanish newspaper El Mundo. Varoufakis accused creditors of trying to terrorise voters by capping a liquidity line to Greek banks. "What they're doing with Greece has a name: terrorism," he told El Mundo. "Why have they forced us to close the banks? To frighten people."

It's not clear, however, if that would involve new elections. That would take time and without financial assistance, Greece would surely go bankrupt.

Greece is no longer in a bailout program since its previous package expired. The troika has demanded further pension cuts and tax increases for businesses and farmers in return for a 7.2 billion euro bailout. The past week saw the country's bailout program expire on Tuesday when it defaulted on a 1.5 billion euro ($1.7 billion) repayment as banks closed their doors and put limits on cash withdrawals. So it would have to negotiate a new one with its creditors that involves more money for the government and the banks and new economic austerity measures. That is unlikely to be agreed on overnight, meaning the banking restrictions on money withdrawals and transfers may remain in place for longer than anticipated.

Varoufakis says banks will reopen Tuesday whatever the referendum's outcome. That's unlikely to happen unless the European Central Bank agrees to increase the credit to Greek banks.

An additional difficulty is that the International Monetary Fund has said it will not get involved in a third bailout unless it includes substantive debt relief for Greece. The Europeans, on the other hand, have ruled out debt relief until Greece makes its reforms.

Despite the Greek government's assertion that a "no" vote will not lead to a euro exit, most people agree it would open up more uncertain outcomes, especially if the ECB halts its life-support measures to Greece's banks.

A number of European politicians, including Jeroen Dijsselbloem, the top eurozone official, have said a "no" vote would jeopardize Greece's place in the euro. Others, such as the leaders of France and Italy, appear to be holding the door ajar for further talks.

The word "Grexit" - meaning Greek exit from the euro - has dominated the past few months of negotiations. But the country will not return to the drachma Greece's former currency immediately. Rather, the risk increases the longer there is a deadlock in talks. Without a deal and without money, Greece will default on more of its debt repayments and will not be able to pay salaries or pensions. The banks will run dry, even with the cash withdrawal limits.

Given the chaos of the past week, in which Greece became the first developed economy to default on a loan with the IMF, a new bailout package would probably entail harsher terms than those on offer even last week.

On the other hand, Tsipras and Varoufakis believe that a "no" vote will give the government greater power in its negotiations with creditors. "Many people may ignore the will of the government but the people's will cannot be ignored," Tsipras said after casting his vote in Athens on Sunday. "People in Greece will decide their own destiny. I am sure that after tomorrow a way will be opened for a return to the founding values of Europe."

Radical left Greek MEP Stelios Kouloglou told Anadolu Agency that Greeks should vote against the "unsustainable" proposals that are "not going to work." He added: "The country's creditors were not planning to get their money back... they wanted to get rid of Tsipras. The Europeans do not want to see anyone challenge their power as Tsipras did." The referendum was preceded on Friday by rallies across Greece organized by both camps. Opinion polls on Friday indicated the country was more or less evenly split between a "yes" and a "no" vote.
Last Update: Jul 05, 2015 7:25 pm
RELATED TOPICS