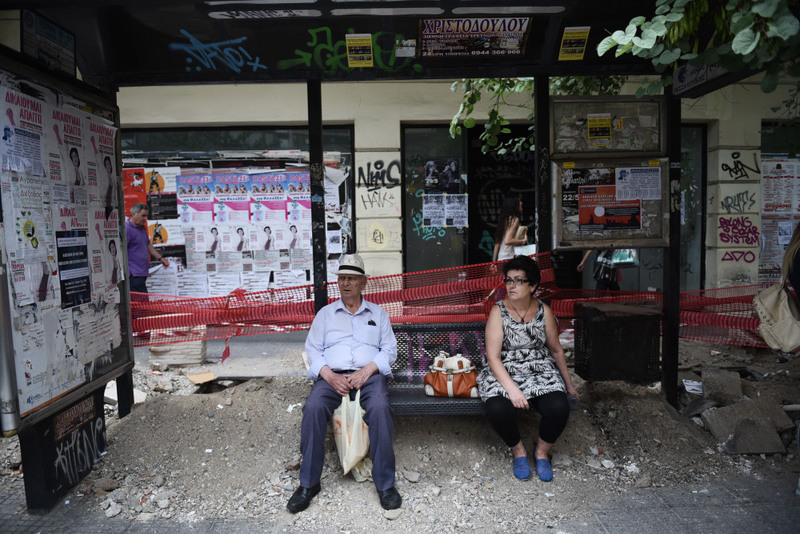 A man and a women sit waiting at a bus stop amid sidewalk construction in Thessaloniki. Capital controls continue as the ECB maintains the liquidity level for Greece.
by Daily Sabah with Wires Jul 07, 2015 12:00 am

The ECB is refuses to increase its liquidity amount for Greece leaving Greeks waiting in front of ATMs. Public transportation is free of charge to ease the financial strain, while never-ending eurozone meetings continue in Brussels

Following the European Central Bank's (ECB) decision to keep its emergency liquidity support at the present level, the Greek government applied capital controls on banks and announced that banks will be closed until July 7. However, the Greek Bank Union extended this duration by two more days keeping banks closed until tomorrow. The 60-euro limit on withdrawals from ATMs is still active. Several state-owned banks are still active for electronic fund transfer purposes.

Greeks once again formed long lines waiting in front of ATMs today, hoping to withdraw up to 60 euros from their accounts. The National Bank of Greece and private commercial banks are exerting efforts to prevent cash shortages at ATMs. All eyes are on Europe after Greece rejected the reform plans formulated by the European Commission, European Central Bank (ECB) and International Monetary Fund (IMF).

The Greek Ministry of Communications announced that all public transportation in Athens will be free of charge until July 10 in order to decrease the burden on citizens. Meanwhile, creditors continued increasing pressure on the Greek government in yesterday's Eurozone Leaders Summit following the ECB decision. Apart from the liquidity shortage of Greek banks, the ECB could face sustainability problems in Greece. Authorities from Greek banks have said that there is no way back for Greece at the moment and if the Syriza-led government fails to reach an agreement with Greece's creditors, Greek banks will be in jeopardy.

At least three companies in Greece including its biggest electronic appliances chain have paid staff in cash, after the country imposed limits on withdrawals from banks last week in an bid to ward off a possible collapse of its banking system. The moves by Greece's Kotsovolos, a unit of Britain's Dixons Carphone, and another two companies are signs of the domestic impact of the financial crisis, after Greece closed its banks and limited withdrawals from automated teller machines (ATMs) to 60 euros ($66) a day.

Capital controls have started taking a toll on Greek households' budgets and choking off the normal flow of operations for many businesses. Four banking sources said on Monday Greek banks will stay closed at least until Friday.

A spokeswoman from Dixons said Kotsovolos paid staff in cash last week and was waiting to see what happens this week. Two other big companies operating in Greece have also paid part or their wages in cash, while a third was considering offering its employees such an option for the next scheduled payment at the end of the month, people familiar with the matter told Reuters on condition of anonymity.

The ECB cannot provide emergency funding to banks on overly generous terms or against insufficient collateral, it said yesterday, spelling out strict terms for banks in Greece and elsewhere to obtain such funds.

The ECB, which has been providing an Emergency Liquidity Assistance (ELA) lifeline to Greek banks, on Monday raised the discount on the collateral Greece must put up in return for the cash, keeping pressure on Prime Minister Alexis Tsipras hours ahead of a meeting with other euro zone leaders.

In a document published on its website on Tuesday, the ECB spelt out instances in which ELA provision would conflict with its objectives, saying it could not be supplied by national central banks against insufficient collateral and on generous

terms that invited "moral hazard". "Provision of ELA at overly generous conditions... could increase the risk of moral hazard on the side of financial institutions or responsible authorities," the bank said in the document. Other examples of possible conflict included situations in which ELA would run the risk of amounting to government financing or conflict with the single monetary policy of the euro zone.

Under ECB rules, ELA is designed to support solvent banks in need of liquidity. It is provided by national central banks after ECB approval. Some members of the ECB governing council have long voiced reservations about ECB aid to Greek lenders, with Germany's Jens Weidmann recently questioning their solidity. The ECB acknowledged that, in general, risks associated with emergency lending were not fully offset by the provision of collateral. "Even after risk control measures have been applied, some residual risks remain," the bank said in the document.
Last Update: Jul 07, 2015 7:55 pm
RELATED TOPICS