Greece has until Sunday to submit proposals on debt crisis: Italian PM Renzi 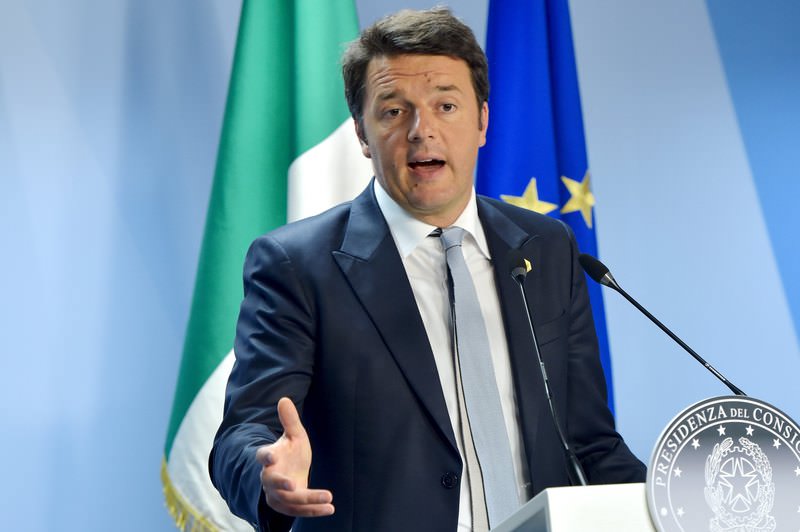 by Associated Press Jul 07, 2015 12:00 am
Eurozone leaders have given Greek Prime Minister Alexis Tsipras until Sunday to come up with a full proposal at a summit of the 28 European Union leaders, Italian Premier Matteo Renzi says.

Renzi said on Tuesday that Tsipras has all interest in coming up with a sensible proposal to stave off financial chaos in Greece and said that "I think that in the end we have an agreement."

Overcoming their surprise when Tsipras failed to come up with a detailed plan, the European leaders reluctantly agreed to a final summit Sunday, saying that could give both sides an opportunity to stave off collapse of the struggling but defiant member nation.

With Greece's banks just days away from a potential collapse that could drag the country out of the euro, Tsipras arrived with only vague proposals and a commitment to back it up with real figures and a more detailed plan by Thursday.

"We'll see if on Sunday this issue will be solved once for all," Italian Prime Minister Matteo Renzi said.

But patience among Greece's allies was wearing very thin ahead of the meeting.

"You know, there was a promise for today. Then, they're promising for tomorrow," said Lithuanian President Dalia Grybauskaite. "For the Greek government it's every time 'manana.'"

Tsipras came buoyed by a triumph in last Sunday's referendum, where an overwhelming majority of Greeks backed his call to reject the belt-tightening reforms that creditors had last proposed.

But that domestic victory did not appear to give him much leverage in talks with foreign creditors, who know Tsipras needs a deal soon to keep his country afloat. Banks have been shut since last week and will not reopen before Thursday, cash withdrawals have been limited for just as long, and daily business throughout the country has come to a near standstill.

So it was with astonishment and dismay that European leaders learned Tsipras did not yet have a written proposal for new rescue aid.

"I'm extremely somber about this summit. I'm also somber about the question of whether Greece really wants to come up with proposals, with a solution," Dutch Prime Minister Mark Rutte said.

Greece's eurozone partners have steadfastly said they want to help Greece stay in the currency club but have just as often complained about Greece dragging its feet during months of negotiations.

"At a certain point, you need to get to the truth," said Belgian Prime Minister Charles Michel, before asking: "Is there, yes or no, a political will of the Greek government?"

A Greek government official, who asked not to be named because of the sensitive nature of the discussions, said Tsipras was presenting a "common ground" to the 18 other leaders Tuesday, while a detailed proposal would come Wednesday.

He said the Greek government would submit a request for immediate financing in advance of 5 billion euros in loans due for repayment by the end of the month. He predicted a full political deal could be reached in two or three weeks.

"We are no longer talking about weeks but very few days," she said.

In his flurry of contacts, Tsipras spoke by phone with President Barack Obama, and the White House said it was in Europe's interest to reach a resolution that puts Greece on the path toward economic growth and stability.

An official from a eurozone nation said that Greece's failure to bring clear proposals to an earlier meeting of finance ministers caused widespread frustration. Greek Finance Minister Euclid Tsakalotos instead made only an oral presentation and discussed key issues.

"Everybody was angry," said the official, who asked not to be identified because he was commenting on a closed meeting.

Tsakalotos left the leader's summit venue mid-evening, telling reporters: "My impression is that we are having a go to find an agreement soon."

The eurogroup's top official, Dutch Finance Minister Jeroen Dijsselbloem, said he hoped the Greek government would make a written request as soon as Tuesday night or Wednesday morning to tap Europe's bailout fund. Once that is in, the eurozone finance ministers would hold a teleconference to discuss the proposals and decide whether they can give Greece more loans.

One big sticking point in the talks is Greece's demand that the terms of its bailout loans be made easier.

European officials are split on the issue, with lead eurozone lender Germany still reluctant. The International Monetary Fund called last week for European states to accept longer repayment periods and lower interest rates on their loans to Greece. Many economists say that Greece's debt burden, at almost 180 percent of annual GDP, is unsustainable for a country its size.

Getting a new rescue deal for Greece is urgent and becoming more so by the day. Greek banks are running out of cash even after the government shut them last week and placed limits on how much depositors can withdraw or transfer.

Normal commerce is now impossible in Greece. Small businesses, lacking use of credit cards or money from bank accounts, were left to rely on cash from diminishing purchases from customers, as Greeks hold on tight to what they have. And suppliers are demanding that businesses pay cash up front.

Giorgos Kafkaris, a 77-year-old pensioner, was among Greeks standing in line to withdraw cash at an Athens ATM on Tuesday.

"I came to get the 120 euros, I can't take more. The good thing is we had sorted things out earlier and we had 200-300 euros set aside," he said. "I'm waiting for something better for all of us. I believe something better will happen."

Tsipras's appointment of Tsakalotos as the new finance minister to lead talks with creditors was interpreted as a sign he may be willing to compromise. Tsakalotos, a 55-year-old economist, replaced Yanis Varoufakis, who constantly clashed with his peers.

The lack of progress on Greece worried stock markets in Europe, where the Stoxx 50 index of top companies was down 2.1 percent on Tuesday. The euro also fell, while Greece's stock market remained shut since last week amid the bank closures.

Greece has been granted two bailout programs worth a total of 240 billion euros ($266 billion) in loans from other eurozone countries and the International Monetary Fund. But the spending cuts and tax increases demanded as a condition for the loans have hit growth, sending the country into a six-year recession and pushing unemployment to 25 percent. The government, meanwhile, has been slower than hoped in making the economy more competitive and selling state assets to raise money.