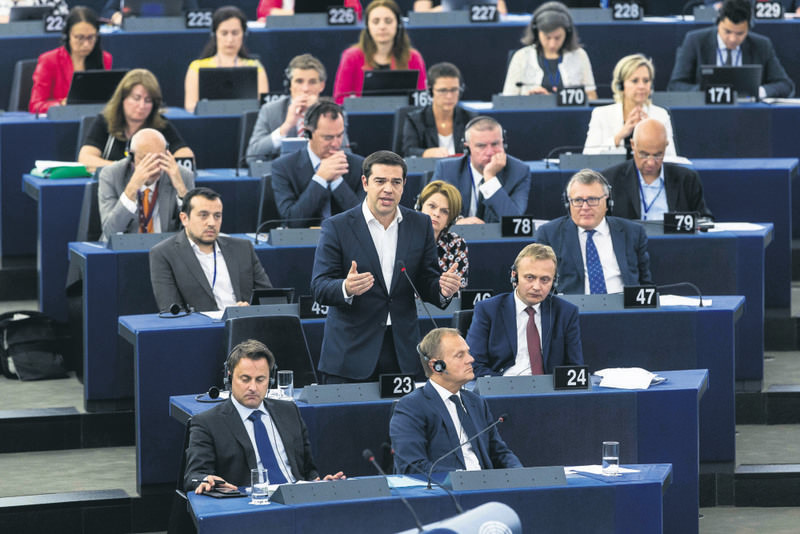 Greek PM Tsipras (c), delivered his speech at the European Parliament in Strasbourg on Wednesday.
by Associated Press Jul 08, 2015 12:00 am

Greece submitted a request for aid from Europe's bailout fund yesterday, and is rushing to detail a plan of reforms that creditors want to see this week if they are to save the country from financial collapse and keep it in the eurozone

Greek Prime Minister Alexis Tsipras earned both cheers and jeers as he addressed lawmakers at the European Parliament, where he said his country is seeking a deal that might bring a definitive end to his country's financial crisis, not just a temporary stop-gap. "We need to ensure the medium-term funding of our country with a development and growth program," Tsipras told the lawmakers gathered in Strasbourg, France. Greece on Wednesday morning submitted a written request for a new support program from Europe's bailout fund, according to Michel Reijns, the spokesman for the eurozone's top official, Jeroen Dijsselbloem. Greece needs to back that up by presenting by the end of Thursday a detailed, cost-assessed plan on the economic measures it would take in exchange for loans. So far, Greece has only produced an outline of the measures. European leaders will hold a summit on Sunday to decide whether the plan is good enough.

Applause rose from leftist quarters in the EU Parliament when Tsipras said aid to Greece only helped out banks, not ordinary Greeks. A few called for compromise. The head of a conservative group in the Parliament, Belgium's Guy Verhofstadt, said he was "furious" at Tsipras' failure to spell out specifics of his reform plans. The leader of Britain's nationalist UKIP, Nigel Farage, told Tsipras: "Your country ... should have never joined the euro" and urged him to quit the common currency. Britain is not part of the euro. Tsipras insisted last Sunday's referendum result, in which voters soundly rejected a previous creditors' reform proposal, does not mean a break with Europe. In Greece, meanwhile, people were struggling with an eighth day of limits on money withdrawals. They cannot take out more than 60 euros ($67) a day from TMS, are unable to send money abroad or pay supplies or bills without special permission. The banks remain shut.

In his speech to the European Parliament, Tsipras aid Greece's troubles date to long before he took office five months ago. He described Greece as having been used as an "austerity experiment" for the last five years of bailout reforms imposed on the country that led to spiraling unemployment and poverty, and a contraction of the economy by a quarter. The experiment, he said had clearly failed. "We demand an agreement with our neighbors, but one that gives us a sign that we are on a long-lasting basis exiting from the crisis which will demonstrate to us that there is light at the end of the tunnel. An agreement which will bring about the credible and necessary reforms," he said.

Tsipras vowed to continue reforms already undertaken. "But let us not forget that in the last five years, the Greek people have made a tremendous effort for adjustment a very difficult and hard process of adjustment. This has exhausted the patience and resilience of the Greek people."

The Greek crisis has frayed the nerves of other European leaders, who have accused the Greek government, elected in January on promises to repeal austerity, of foot-dragging and exacerbating the situation. Highlighting the rising anger with Tsipras, European Commission President Jean-Claude Juncker had a stark warning for Greece after Tuesday's eurozone summit. "We have a Grexit scenario, prepared in detail," he said, apparently referring to the situation in which Greece would be forced out of the currency union.

Greece's eurozone partners have steadfastly said they want to help Greece stay in the currency club but have just as often complained about Greece dragging its feet during months of negotiations. One big sticking point in the talks is Greece's demand that the terms of its bailout loans be made easier.

European officials are split on the issue, with lead eurozone lender Germany still reluctant. The International Monetary Fund called last week for European states to accept longer repayment periods and lower interest rates on their loans to Greece. Many economists say that Greece's debt burden, at almost 180 percent of annual GDP, is unsustainable for a country its size. Greece has been granted two bailout programs worth a total of 240 billion euros ($266 billion) in loans from other eurozone countries and the IMF. But the spending cuts and tax increases demanded as a condition for the loans have hit growth, sending the country into a six-year recession and pushing unemployment to 25 percent.
Last Update: Jul 08, 2015 8:25 pm
RELATED TOPICS