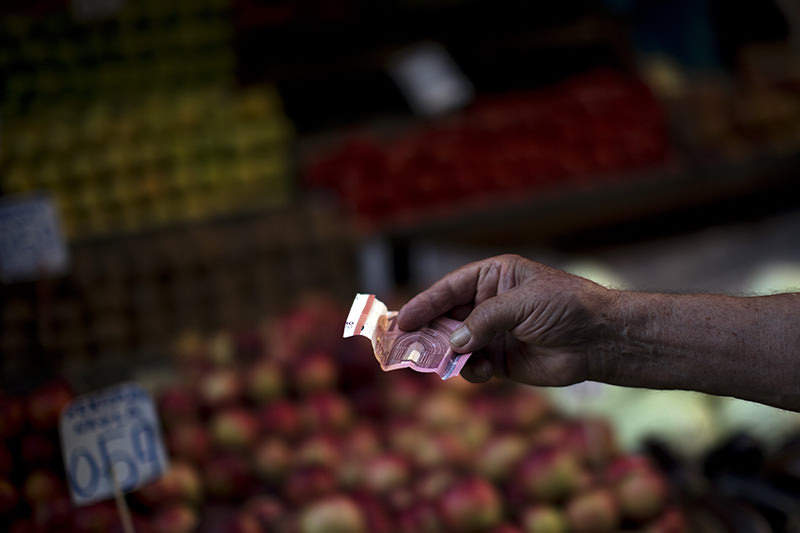 A man holds out a ten euro bill as he pays for produce in a fruit market in central Athens, Tuesday, July 7, 2015 (AP Photo)
by Compiled from Wire Services Jul 08, 2015 12:00 am
Greece will issue a ministerial decree later on Wednesday to extend a bank holiday that has already lasted for eight working days, a government official said, as Athens seeks to convince skeptical partners for a new aid deal.

"The bank holiday will be extended," the official said, without providing further details.

Banks are struggling to keep their automated teller machine networks fed with banknotes to dispense cash at the daily withdrawal limit of 60 euros, gradually using up the remaining cash buffer in the system.

Last week Greece issued a decree imposing capital controls and closing its banks after the European Central Bank froze a vital lifeline of emergency funds following the breakdown of bailout talks between Athens and its creditors.

Greek Prime Minister Alexis Tsipras said on Wednesday morning that the bailout funds that Greece received in the past in 2010 and 2012 never reached the people of Greece.

In his speech at the European Parliament in the French city of Strasbourg on Wednesday, Tsipras said: "The bailout funds have never reached the Greek people.

"Those funds have gone to banks, and have not funded an economic recovery. We need sustainable development and growth."

The premier also insisted that the proposals given by the Greek side were adequate to resolve the crisis.

"Our reform proposals are credible and will share the burden with European taxpayers," he said.

The Greek Prime also said all sides must prevent division in Europe as they try to hammer out a solution to his country's crippling debt crisis, just days away from a final deadline.

"This is a European problem which requires a European solution... let us not allow it to become a divided Europe," Tsipras told the European Parliament, after EU leaders set a Sunday deadline for a deal on new bailout funding crucial to keeping Greece in the eurozone.