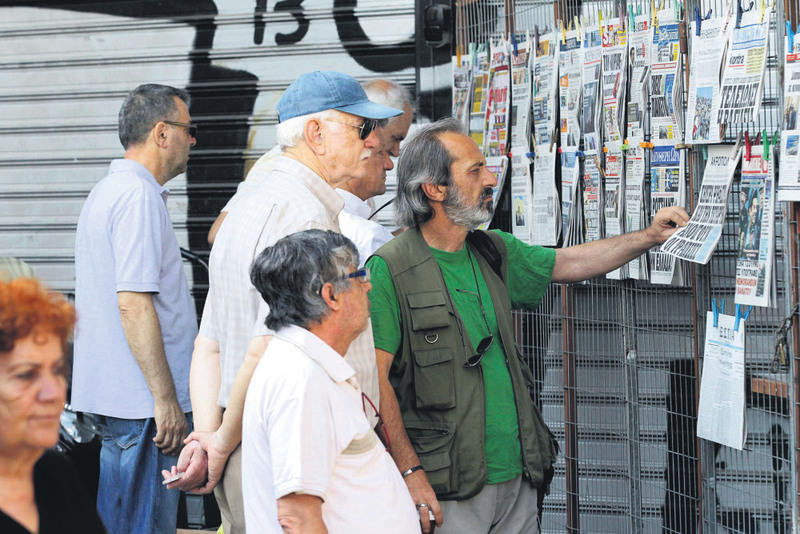 People read the morning newspapers on a kiosk in central Athens on Friday. Prime Minister Alexis Tsipras and Minister of Finance Euclid Tsakalotos briefed in detail the Syriza parliamentary group on the latest developments early the same morning.
by Daily Sabah Jul 10, 2015 12:00 am

Young Greeks moving back to their parents' houses, university graduates leaving the country for jobs, frugality in consumption decisions and even changing eating habits have began after the financial crisis in Greece

Financial struggles and the ongoing crisis has altered the lives of the Greeks, as many citizens are forced to shop at thrift stores while others experience severe difficulties in terms of business and their careers. There have been remarkable changes in the lives of all age groups in Greece since the crisis hit the entire Greek economy.

Young Greeks are moving back in with their parents since paying rent is increasingly difficult on their own due to financial hardships. University graduates are leaving the country for the prospect of a better future, career opportunities and employment possibilities as they lack faith in the Greek job market and overall economic situation. Even eating habits have changed as people do not order food as much as they did in the past to save money. There is a shortage of cash because the banks are closed. In accordance with the capital control on banks, citizens can only withdraw up to 60 euros from ATMs per day, and since many ATMs run out of five, 10 and 20 euro banknotes, most people cannot withdraw more than 50 euros. The cash shortage has caused delays to rent, water and electric bill payments.

Adoption numbers have dropped significantly as more families have started to believe they cannot afford to foster children. The effect of the crisis can be seen on the walls throughout Greece, as most of the new graffiti feature themes reflecting the financial crisis, the euro and the EU. Consumption of tobacco products and alcoholic beverages has increased significantly along with the crisis, and most consumers have switched from ready-rolled to hand-rolled cigarettes.

Small businesses owners claim business has halved, and people purchase basic vegetables such as peppers and tomatoes by the piece instead of by kilogram. Greeks have also decreased their expenditure of pharmaceutical products as they only purchase medication in case of an urgent need. Self-employed citizens make up about 40 percent of the Greek workforce, and communication between investors and business owners is difficult due to the Athens Stock Exchange (ASE) being closed. Greek credit cards are not accepted as a payment method in other countries, and most Greek citizens have cancelled their foreign travel plans. Since the banks are closed, people in Greece cannot transfer money to their children studying abroad or relatives who reside outside Greece. The tourism sector has also taken a great hit, as the Association of Greek Tourism Enterprises declared there has been a 30 percent decline in reservations from Germany - one of the country's biggest tourism partners.

The fact that there are no concrete signs of a resolution of the financial crisis in Greece and the possibility that the country could face worse scenarios in the upcoming days has driven people to go shopping. Greek citizens who have money have recently started to buy durable consumer goods, and gold and luxury clothing via cash and credit cards.

Greek citizens, who think that the economic crisis in the country will get worse and that their money will lose value if the country returns to the drachma and that even some of their money in their bank accounts will be seized, just like in Greek Cyprus, have started to spend their money on shopping. While it is emphasized that 44 percent of Greek citizens are in straitened circumstances and nearly 50,000 people have been laid off, a majority of people are keeping their money safe in traditional ways because of the money withdrawal limit in banks. It is stated that there are people who prefer to store their money under mattresses or even in fridges while others spend their money on durable goods, gold and jewelry.

Greece and its European creditors appeared to be narrowing their differences after Athens offered a raft of reform proposals in order to get its hands on a third bailout of around 53 billion euros ($59.5 billion). The proposals, which included around 13 billion euros worth of austerity measures, have so far met with a general positive response, with French President Francois Hollande describing them as "credible." Representatives from the European Commission, European Central Bank and International Monetary Fund, are currently assessing the proposals. If Greece fails to win the support of creditors for a new bailout the country faces bankruptcy and an exit from the euro, which many economists think could derail the global economic recovery especially at a time when China is showing signs of coming off the boil. The eurozone's finance ministers are due to meet on Saturday, and their verdict will go a long way to determining the fate of Greece, whose economy is in freefall following the imposition of strict capital controls at the start of last week.

Private islands on sale in Greece

After rejecting the terms that creditors stipulated in return for restoring cash flows in Sunday's referendum, Greece has begun to put privately-owned islands up for sale. According to the data compiled from a real estate sales website named "Online Private Islands," a total of 17 privately owned islands have already been put up for sale as of today. This figure is expected to reach 120 in the upcoming process. Julian Walker, a director at the U.K.-based Spot Blue International Real Estate Company and a specialist in the real estate market, said that it would be a lucrative investment in the long run to purchase those personal islands that Greece has presented for sale to fight its economic crisis. In reference to the possibility that Greece might leave the euro and return to its previous currency, the drachma, Walker said that house prices will drop if the euro is not used and a new currency is introduced in the country. That is why it would be inconvenient to invest now, he said, adding that it would be a reasonable investment to purchase one of those islands for long-term investors. According to Walker, real estate leasing is unnecessary and might be harmful in financial terms. This alternative might be attractive for those who intend to have a short-term holiday.