Eurogroup to reply to latest Greek bailout proposals on Friday 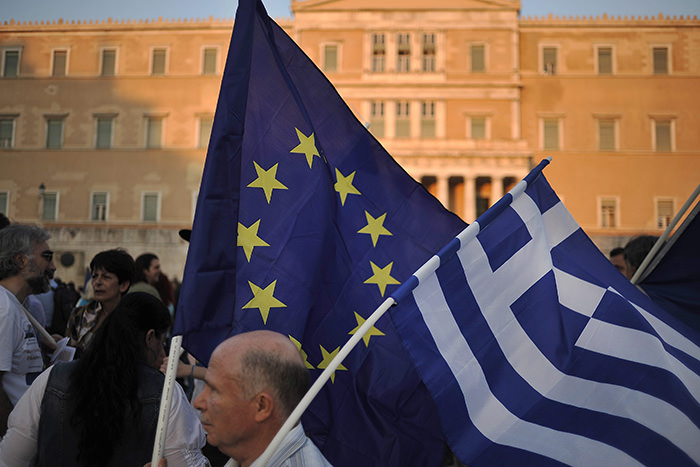 A demonstrator waves Greek and pro Euro flags during a pro euro rally in front of the Greek Parliament in Athens Greece, 09 July 2015 (EPA Photo)
by Compiled from Wire Services Jul 10, 2015 12:00 am
The Eurogroup will reply to the latest Greek bailout proposals on Friday, the head of the group, Jeroen Dijsselbloem, said on Friday morning ahead of a scheduled meeting on Saturday.

Speaking to the press in The Hague, Dijsselbloem said the finance ministers from the 19 eurozone members were reading the offer and working on a reply.

The Greek government sent the proposals early Friday morning. They call for a new three-year bailout valued at 53.5 billion euros ($59 billion) and make significant concessions on pensions and tax increases.

Meanwhile, French President Francois Hollande said that Greece's latest offer of belt-tightening measures in return for a three-year loan are "serious and credible."

Indicating his support for the Greek government, Hollande reinforced his position as a political ally of Prime Minister Alexis Tsipras' SYRIZA party ahead of weekend meetings in Brussels that will set the course for Greece's financial future.

France's role in the negotiations has often been set against Germany's harder line, and daily Le Figaro revealed recently that 10 officials from the French finance ministry had been deployed to help Greece's new finance minister, Euclid Tsakalotos, come up with solutions to the country's stand-off with its creditors.

Greece's proposals were submitted to Brussels late Thursday, as part of a plan to support their request for a three-year loan. According to Greek financial website Capital.gr, the loan request is for 53.5 billion euros (59 billion dollars) from the eurozone bailout fund, the European Stability Mechanism (ESM).

European shares surged and the euro jumped on the news amid hopes of an end to the long-running Greek debt crisis following Athens' request. The eurozone's blue-chip Euro Stoxx 50 was up 2.5 per cent in early morning trading, while the euro climbed 0.6 per cent to 1.1109 dollars.