Lack of trust in Greece a great problem: Eurogroup ministers 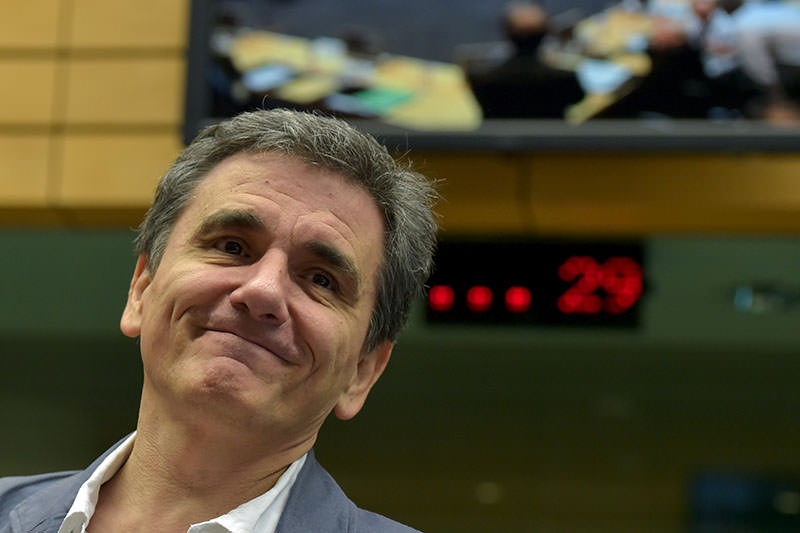 Greek Finance Minister Euclid Tsakalotos takes part in a euro zone finance ministers' meeting on the situation in Greece, in Brussels, Belgium, July 12, 2015 (Reuters Photo)
by Anadolu Agency Jul 12, 2015 12:00 am
Lack of confidence in Greece is emerging as the biggest issue holding up agreement at the Eurogroup meeting in Brussels on Sunday.

Arriving at the conference, several ministers pointed to a lack of trust in the Greek government as a major obstacle to achieving an accord.

Italian Finance Minister Pier Carlo Padoan said: "While the new Greek bailout proposals are much better, the lack of trust in the Greek government is a great problem.

"That's why I hope that on Monday, the government will begin implementing some of the reforms that we have discussed here -- they are needed for the Greek economy in any case."

Padoan insisted that the Eurogroup would keep working hard, and that progress had been made.

International Monetary Fund Managing Director Christine Lagarde declined to comment to reporters as she arrived at the Eurogroup meeting on Sunday.

EU Commissioner for the Euro Valdis Dombrovskis told reporters the EU probably would not be able to start talks for a new Greek bailout on Sunday.

"I think it's relatively unlikely that the European Commission will get a mandate to start formal negotiations," he said.

Slovakian Finance Minister Peter Kazimir, arriving at the meeting, absolutely excluded the possibility of a deal being reached on Sunday. He also raised the issue of a lack of confidence in Greece, and said that he too wanted to see what would happen in Athens on Monday.

French Finance Minister Michel Sapin, speaking on Saturday at the Eurogroup meeting, said: "Lack of trust in the Greek government is a major issue. In the past, promises from the Greek government have not been kept." The Greek delegation must restore confidence, Sapin said.

Greece has proposed a 53.5 billion euros ($59 billion) bailout over three years, and has made a number of key concessions to creditors on the economic reforms needed to accompany the loans.
Last Update: Jul 12, 2015 1:45 pm
RELATED TOPICS