Greek party leaders do not all welcome bailout deal 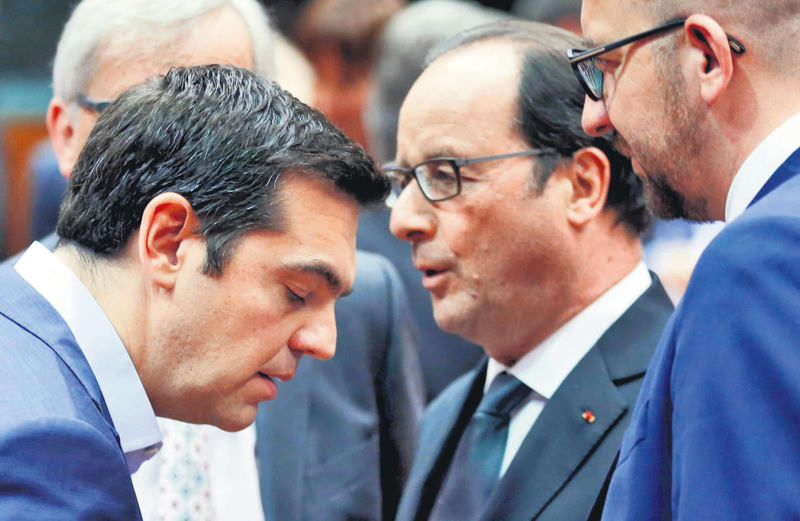 Greek PM Tsipras (L) listens to French President Hollande (C) next to Belgian PM Michel (R) during a eurozone leaders summit in Brussels, Belgium on July 12.
by Daily Sabah with Wires Jul 13, 2015 12:00 am

Eurozone leaders agreed to provide a new bailout worth 86 billion euros to Greece with new reform expectations, which made Greek party leaders uncomfortable due to never-ending austerity

Greek Prime Minister Alexis Tsipras has at last achieved reaching a deal with the country's creditors, but he may have a tough time getting the new Greek bailout deal through parliament. On Monday, it became clear that there is already opposition from the left wing of the ruling Syriza party. The leftist platform of the party, which includes Minister of Energy Panagiotis Lafazanis, said in a statement yesterday: "The Left Platform calls on the people not to be disappointed by this development, but instead to insist for a 'no' as they did with the referendum, to the end. … Say 'no' to memorandums, neoliberalism and to the austerity that is institutionalized within the eurozone."

Syriza member of and Vice President of European Parliament Dimitris Papadimoulis lashed out against Greece's partners over the pressure put on Greece in order to achieve a deal. Papadimoulis tweeted on his personal account: "The Taliban are demanding the humiliation of the country."

Eurozone leaders made Greece surrender much of its sovereignty to outside supervision yesterday in return for agreeing to talks on an 86 billion euro ($94.95 billion) bailout to keep the country in the single currency.

Tsipras said the agreement would lead to investments returning to Greece and balancing out the recessionary measures that the deal includes, and said: "The decision today keeps Greece in conditions of financial stability, it gives the possibility of recovery. At the same time though, we knew from before that it would be an agreement whose implementation is difficult."

But, the opposition appears at home. Nikos Filos, parliamentary spokesperson for Syriza, went further: "Greece is being waterboarded by euro-area leaders."

Nikos Filis, the parliamentary spokesman for Syriza, on ANT1 TV Monday morning, accused Germany of "tearing Europe apart" for the third time in the past century.

Minister of Labor Panos Skourletis said on ERT TV that the bailout deal would not pass Greek parliament. "It is not viable," he warned. But there was considerable support for the deal, and for Tsipras himself, from the opposition.

Kiriakos Mitsotakis, a center-right New Democracy deputy, tweeted right after the agreement was announced: "We have three years ahead of us to become a normal European country. I hope we have learned from our mistakes now. Let us have a new beginning." "The government must act fast: there is no room for more mistakes," Panhellenic Socialist Movement (PASOK) President Fofi Gennimata said in a tweet. "We avoided a Grexit, we have a deal," she added.

Center-left To Potami leader Stavros Theodorakis said: "The objective has been achieved. The country remains in the eurozone. Alexis Tsipras kept his last promise in spite of all those that wanted us to return to the drachma."

"We hope government, parliament and parties will rise to the occasion and, without delay, take the necessary decision in order to enter, as soon as possible, into a new era," he continued. "The agreement foresees painful reforms and, unfortunately, demands more sacrifices from the Greek people. This time let's do it with a plan, determination and justice, for Greece and for our children."

Evangelos Meimarakis, main opposition New Democracy leader, said in a written statement: "Unfortunately, at the last minute, we had only the choice for agreement or no agreement, and that would have led to total disaster." He underlined that "with the agreement Greece got a breather in order with seriousness and responsibility to try to find again its place in Europe." "The government must act fast; there is no space for more mistakes," Gennimata tweeted on her personal account after the Brussels deal.
Last Update: Jul 13, 2015 7:56 pm
RELATED TOPICS