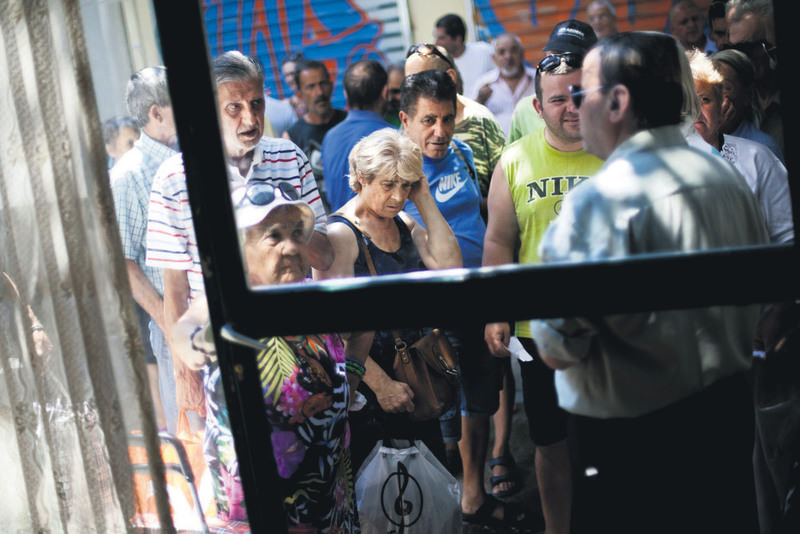 Tsipras faces opposition from his own ministers and support from the opposition before the bailout deal is voted on in parliament, as he seems to have retracted from his pre-election promises on austerity measures

Prime Minister Alexis Tsipras faced open revolt from some of his own ministers as he sought support on Tuesday for a bailout deal that, while saving the country from financial collapse, would cause years of more pain for Greeks.

The government must pass a raft of measures through Parliament by tonight, including consumer tax increases and pension reforms, in order to start negotiations with European creditors on a third bailout worth as much as 85 billion euros ($95 billion).

The deal tramples on practically all of Tsipras' pre-election promises to repeal the budget austerity that European creditors have imposed for five years. But after dragging out the rescue talks for months, Tsipras was out of alternatives this week: without a deal, Greece's banks would likely have collapsed, pulling the country out of the euro, Europe's joint currency.

Tsipras is expected to have the numbers in Parliament to pass the measures, since he will have the support of most opposition parties. But the government's political survival is in danger if large numbers of its own lawmakers resign their seats or openly vote against the bill. There was speculation Tsipras might choose to reshuffle his Cabinet, which would remove dissenters from key positions.

Energy Minister Panagiotis Lafazanis, one of the hardliners in Tsipras' radical left Syriza party, denounced the deal and called on the prime minister to cancel it before legislation reaches Parliament. "The deal ... is unacceptable and does not deserve to be charged to a radical political party such as Syriza, and a battling government that promised to abolish ... austerity," Lafazanis said in a statement posted on his ministry website Tuesday. Germany, he said, treated Greece "as if it was their colony and (behaved) as brutal blackmailers and 'financial assassins.'"

Defense Minister Panos Kammenos, who heads the government's junior coalition partner, the right-wing Independent Greeks, stressed he would continue to support Tsipras but described the agreement and the pressure Greece was put under at the summit as an attempt to overthrow the government. "The night before last, there was a coup. A coup in the heart of Europe," Kammenos told reporters outside Parliament. "They want the government to fall and to replace it with one that hasn't been voted on by the Greek people." He said he would not allow that, and would continue to support the government. Party spokesman Terence Quick said the Independent Greeks' 13 lawmakers would vote according to their conscience.

The government holds 162 seats in Greece's 300-member Parliament, and the bill is likely to pass as it enjoys the support of most opposition parties. But about 30 of Syriza's own lawmakers have publicly voiced objections.

If Syriza sees significant losses during the parliamentary vote, one option would be to form a so-called 'national unity' government with other parties.

However, opposition parties have suggested they would be unwilling to enter into a power-sharing agreement with the current two governing parties, although they have promised to support the government in the votes on the bailout terms.

That would leave Syriza as a minority government. It would still be able to push legislation through Parliament, such as the reforms needed for the bailout agreement, but only with the support of opposition parties.

Many Greeks have appeared to take the latest turmoil in stride, saying the measures Greece will have to pass are harsh but that the alternative would have been worse.

"We aren't in a good position within the European Union under the current measures and under this present situation," said merchant Kostas Plafoutzis in Athens. "But under the current conditions if we exit the EU, we will find ourselves in a considerably worse situation."

Others are outraged. Greece's civil servants union called a public sector strike for Wednesday, the day the bill is expected to be voted on.

Since his election in January, Tsipras has faced intense pressure to backpedal on his promises to Greece's exhausted electorate, who have faced five years of harsh austerity measures that have left the economy reduced by a quarter and unemployment at 25 percent.

But with the economy on its knees, he had little choice. If Greece's third bailout in five years goes ahead, it will provide about 85 billion euros in loans and financial support, preserving its membership in the euro, shoring up its banks and allowing some stability to return to the battered Greek economy. It will take an estimated four weeks for Greece to access those loans, before which it will face debt repayments it cannot afford.

On July 20, it has to repay 4.2 billion euros ($4.6 billion) to the European Central Bank. It is also in arrears on 2 billion euros to the International Monetary Fund. EU finance ministers are trying to find a way to give Greece a quick cash infusion so that it can avoid defaulting on the July 20 debt.

Finland's Alexander Stubb, one of Greece's most outspoken critics, said that while it would be difficult, a solution would likely be found. He said one option would be for Greece to get bilateral loans, or even for the IMF and the ECB to delay the repayments. Neither of the institutions has so far suggested that is a possibility.

The Greek economy, meanwhile, is in freefall, as banks have been shut for more than two weeks, with cash withdrawals restricted to 60 euros ($67) per day. When the Greek banks eventually reopen, they will most likely have to depend on more emergency credit from the ECB. The ECB is not expected to sanction further help to the banks until the Greek parliament passes the first set of creditor demands Wednesday. Even then, limits on money withdrawals and transfers are expected to last for months.
Last Update: Jul 14, 2015 8:04 pm
RELATED TOPICS