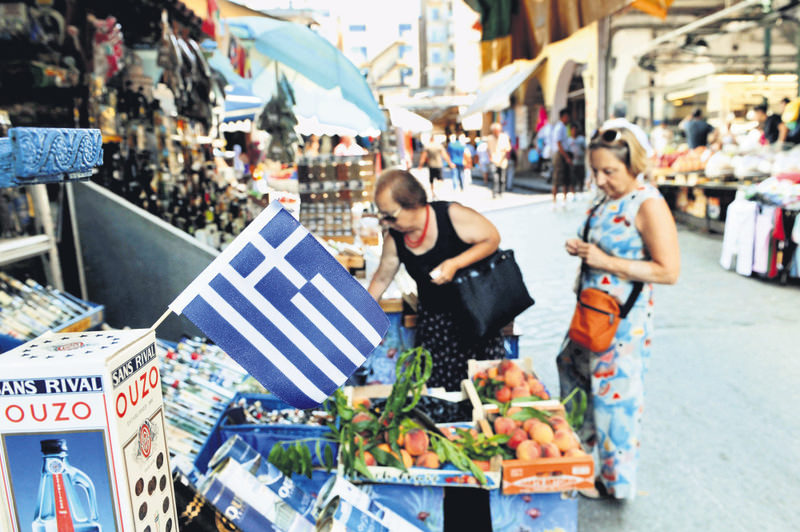 The Greek government hiked taxes and began paying billions of dollars to its creditors yesterday, as banks reopened following a three-week shutdown imposed to prevent a disastrous run on cash

Greeks woke up to widespread tax rises, on everything from sugar and cocoa to condoms, taxis and funerals, as part of a tough reform package agreed last week in exchange for a three-year bailout of up to 86 billion euros that the government hopes will stop it from crashing out of the eurozone. The nation's banks were thronging with customers after a shutdown estimated to have cost the crisis-hit economy 3 billion euros. The banks were ordered to close on June 29 after anxious citizens emptied cash machines in a dramatic escalation of the country's debt crisis. Banks are continuing to offer only limited services - with a ban on most transfers to foreign banks among the capital control measures that are still in place - but the daily cash withdrawal limit of 60 euros has been relaxed.

Bank tellers were dealing with a hectic stream of customers who had been unable to visit for the last three weeks, and many clients expressed frustration over continuing restrictions on financial services. "I came today to collect my pension, but unfortunately I could only get a small percentage of it," said Spyros Papasotiriou as he left his bank in the northern Athens suburb of Neo Psychiko. "It's a big hassle."

The European Union meanwhile confirmed that it had paid out a 7.16 billion euro emergency loan to Greece so it can meet debts of 4.2 billion euros due to the European Central Bank (ECB) on Monday as well as outstanding sums owed to the International Monetary Fund (IMF). A source close to the Greek finance ministry told Agence France-Presse (AFP) the payment had begun.

Taxes have increased from 13 percent to 23 percent on a wide range of goods and services, although the tax on medicines, books and newspapers eased from 6.5 percent to 6 percent. Tryphon Alexiadis, the new deputy finance minister in charge of taxes, vowed that "not a single euro from the tax rise will escape state coffers," adding that "a wave of inspections will be launched" to prevent tax evasion in a country where the problem is notoriously rife. Along with the tax hikes, the Greek government - led by the radical-left Syriza party that came to power in January promising to end austerity - is also set to overhaul its ailing pension system as part of the reforms deal and launch privatizations it had previously opposed.

Louka Katseli, the head of Greece's bank association, said some 40 billion euros have been withdrawn from Greek banks since December by customers anxious over the safety of their deposits, seriously damaging the banks' ability to function normally. She urged people to bring their savings back to the banks to support the crisis-hit financial system. "If we take out the money from our safes and our houses - where, in any case, it isn't safe - and we deposit it in the banks, we will reinforce liquidity," she told Mega TV channel. Greeks are now able to withdraw a maximum of 300 euros at once until Friday, when a new weekly limit of 420 euros takes effect. They can also use their credit cards for foreign purchases again, and certain exceptions to the capital controls have been introduced to help citizens who are studying or undergoing medical treatment abroad. But most people remain unable to take out large sums, transfer money to other countries or open new bank accounts.

The austerity package caused a mutiny among lawmakers of Prime Minister Alexis Tsipras' ruling party - forcing him to conduct a limited reshuffle on Friday - and the embattled prime minister faces a fresh challenge on Wednesday when parliament must approve a second wave of reforms tied to the rescue. Pro-government newspaper Avgi on Sunday said the vote would be a "crash test" that could even result in Tsipras' resignation. "If there are new losses, in whatever form, [Tsipras] will hand back his mandate," the daily said.
RELATED TOPICS