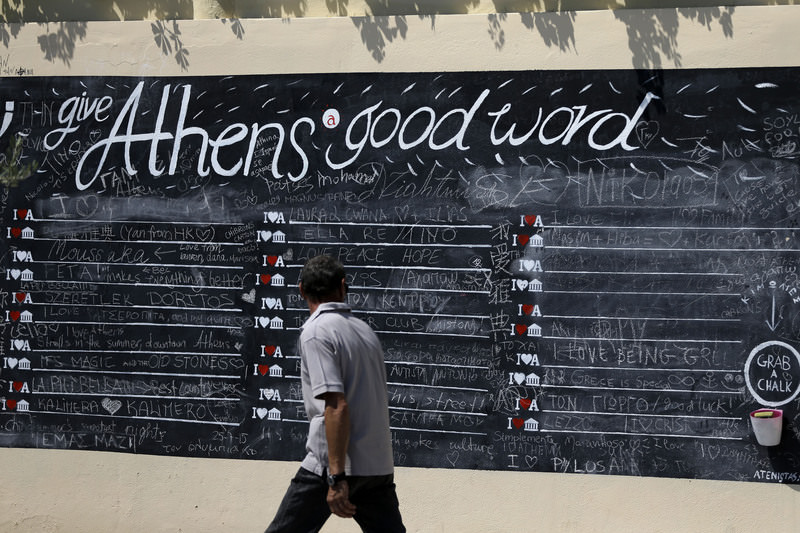 A pedestrian looks at a board where people can write their comments about the Greek capital, displayed on a wall in Athens, on July 27. The government has already begun imposing new austerity measures demanded in return for the new bailout
by Jul 27, 2015 12:00 am

Talks between Greece and its international creditors on a third bailout began in Athens yesterday but the lenders want to see more reforms turned into law before they disburse the first loans to keep the near-bankrupt country afloat.

The government of Prime Minister Alexis Tsipras has pushed two packages of measures through parliament this month as conditions for starting negotiations on a three-year loan programme worth up to 86 billion euros ($95 billion) to keep Greece in the eurozone.

A spokeswoman for the European Commission said teams from the creditor institutions were now in Athens. "Work has started, meaning that the institutions are talking to the Greek authorities," she said. The talks had been due to start last Friday, but were delayed because of organisational and security issues. "Negotiations on a Memorandum of Understanding should now progress as swiftly as possible," Commission spokeswoman Mina Andreeva told a news briefing. Both sides say they want a deal concluded before Aug. 20.

Greece came close to the brink during a long stand off between the government and its creditors, with Athens missing a debt repayment to the International Monetary Fund and forced to close the country's banks for three weeks.

Voters angered by years of austerity demanded by the creditors rejected an earlier bailout offer in a referendum, but Tsipras later agreed in Brussels to the lenders' terms as the crisis deepened.

The institutions involved in the talks are the European Commission, the European Central Bank and the IMF, as well as the eurozone's rescue fund, the European Stability Mechanism (ESM). EU officials said the heads of mission of the Commission and the ECB were already on the ground and the new IMF mission chief was due in Athens by Friday to hold talks on a political level.

Andreeva said Greece had delivered "in a timely and overall satisfactory manner" on promises made at a eurozone summit on July 13 of prior legislation to enable the negotiations. "More reforms are expected from the Greek authorities to allow for a swift disbursement under the ESM. This is also what is being discussed right now," she said.

The banks have re-opened after the ECB increased emergency funding but capital controls remain in place. Doubts also persist about whether a severely weakened Greek economy can support another programme after a six year-long slump that has cut national output by a quarter and sent unemployment over 25 percent.

Among politically sensitive measures held back from the initial package were curbs on early retirement and changes in the taxation of farmers to close loopholes that are highly costly for the Greek state. A source close to the talks said these reforms were expected to be enacted by mid-August.

However, touching pensions is sensitive with Tsipras's left-wing Syriza party, which has already suffered a substantial revolt over the Brussels agreement, and the main opposition New Democracy party opposes ending tax breaks for farmers.