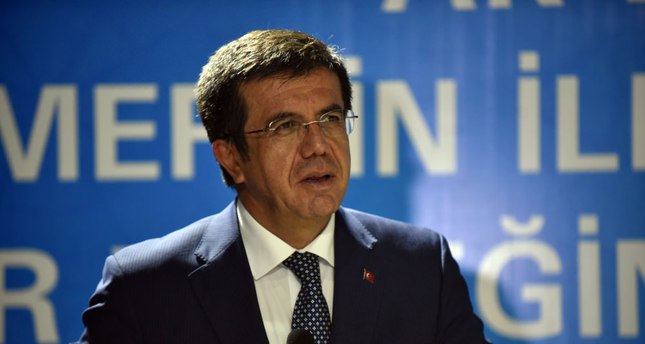 Slowdown in foreign trade was expected as Zeybekci underlined the global setback in export numbers, pointing to the dollar's appreciation, but said they are prepared for any scenario

Evaluating the past six months of foreign trade, Economy Minister Nihat Zeybekci said the developments are parallel to expectations, and he is able to foresee how exports and imports will turn out each month until the end of the year. Stating that exports and imports declined 8.2 and 10.9 percent respectively, Zeybekci reminded that export and import numbers fell worldwide as the global trade volume declined 11.3 percent between January and May. Global trade volume was down 13 percent in May compared with the same period of last year.

Zeybekci stressed that the struggle in global trade can be seen in the foreign trade data of many other countries, and added that especially commodity trading economies have experienced setbacks. Zeybekci listed the decline in the exports of the comparable countries; Brazil, Russia and Australia's total exports went down by 15, 29 and 22 percentrespectively. However the setbacks were not limited with the raw material importing countries as U.S. exports recorded a 5 percent decline in 2015 even though the dollar appreciated worldwide. European countries also experienced a decrease in exports with Germany going down by 14 percent, France by 17 percent, Italy and Spain by 16 percent, Britain by 12 percent. The EU has seen its export numbers drop by 16 percent in general. The East was no different during the same period, as Indonesian exports declined by 12 percent and India's by 16 percent. Even export juggernaut China was significantly affected, recording an increase in exports of only 1 percent. China's relatively good performance is attributed to their national currency being fixed to the dollar.

Zeybekci said there are many reasons for the decline in trade volume, but two factors were the main ones. One is the decrease in commodity trading prices and the appreciation of the dollar since mid-2014, which dramatically changed the export numbers of many countries since the trade statistics are measured in dollars. Some countries recorded growth in exports when their exports were calculated in their domestic currencies, but then the figures reduced as they were changed to dollars. A similar thing happened to Turkey, Zeybekci claimed, and it would have been a different outcome if the statistics were announced in terms of euro as euro-dollar parity fell from 1.37 to 1.12 since the first month of the previous year.

Zeybekci indicated that even though Turkey's exports dropped 8.2 to become $73.5 billion, imports declined as well, by 10.9 percent to become $106.7 billion. These numbers translate to a reduced foreign trade deficit in the first six months of 2015, a reduction of 16.3 percent, which drove the deficit down to $33.2 billion. The exports covered 68.9 percent of the imports made in June. Zeybekci underlined that the decline in the numbers does not correspond to the decline in the quantity of goods as those numbers continue to increase.

Minister Zeybekci expressed that they know what level exports and imports will be on a monthly basis until the end of the year, adding that they closely follow developments in the global markets as well. Stating that the developments are so far in line with their forecasts, Zeybekci said that the negative effects of the parity will begin to diminish following September. Zeybekci also reiterated their ambition of reaching the $500 billion trade volume target by 2023, the 100th anniversary of the Republic.
Last Update: Aug 03, 2015 1:23 am
RELATED TOPICS