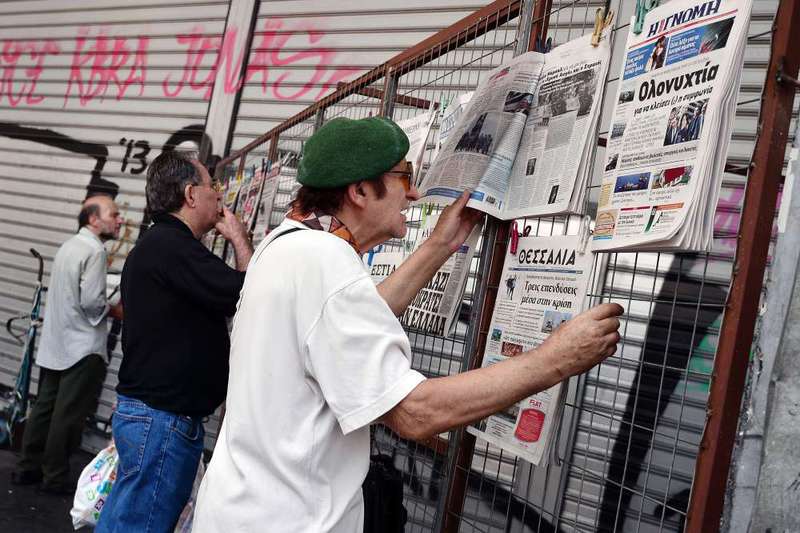 People read at newspapers in Athens. Greece's third bailout, whose details were agreed to with international creditors, will total around 85 billion euros over three years.
by Aug 12, 2015 12:00 am

A deal has been reached between Greece and its creditors just as they entered the last 10 days before the Aug. 20 deadline. The agreement is worth about 85 billion euros, with Greek banks receiving 10 billion immediately

Greece and its international lenders reached a multi-billion euro bailout agreement yesterday after talking through the night, officials said, potentially saving the country from financial ruin. The agreement, reached after a 23-hour session of talks, must still be adopted by Greece's parliament and euro zone countries. The single currency bloc's finance ministers are due to meet on Friday, giving time to finalise the deal before a major debt repayment next week.

The negotiations appeared to have resolved all the main outstanding issues, after Greece's leftist government effectively capitulated last month to creditors' demands for deep austerity measures in order to receive loans. "Finally, we have white smoke," a Greek Finance Ministry official said after exhausted Greek officials emerged in a central Athens hotel to announce the two sides had agreed on terms. "An agreement has been reached."

Finance Minister Euclid Tsakalotos confirmed only "two or three small issues" were pending. Greek shares rose, with the banking index surging 6 percent, while two-year bond yields fell more than 4 percentage points. "The institutions and the Greek authorities achieved an agreement in principle on a technical basis. Now as a next step, a political assessment will be made," European commission spokeswoman Annika Breidhardt said in Brussels.

Still, officials in sceptical northern European countries remained cautious, pending final approval of the deal. "There remains work to be done with details," said Finland's Finance Minister Alexander Stubb. "We must take one step at a time. Agreement is a big word." Commission President Jean-Claude Juncker was due to hold talks later yesterday with German Chancellor Angela Merkel and French President Francois Hollande.

Painful chapterApproving the agreement would close a painful chapter of aid talks for Greece, which fought against austerity terms demanded by creditors for much of the year before relenting under the threat of being bounced out of the euro zone.

After a deal in principle last month, the latest round of talks began in Athens three weeks ago to craft an agreement covering details of reform measures, the timeline for their implementation and the amount of aid needed. A Greek Finance Ministry official said the pact would be worth up to 85 billion euros $94 billion) in fresh loans over three years. Greek banks would get 10 billion euros immediately and would be recapitalised by the end of the year. An EU diplomat said the agreement was worth between 82 billion and 85 billion euros.

Greek officials have said they expect the accord to be ratified by parliament on Wednesday or Thursday and then vetted by euro zone finance ministers on Friday. This would pave the way for aid disbursements by Aug. 20, when a 3.2 billion euro debt payment is due to the European Central Bank.

Facing a revolt from the far-left of his leftist Syriza party, Prime Minister Alexis Tsipras is expected to once again rely on opposition support to push the package through parliament. Once the deal is ratified, Tsipras is expected to tighten his grip over the party by facing down rebels at a party congress next month before considering early elections.

Even then, doubts remain about whether a leftist government elected on a pledge to reverse austerity can implement the punishing terms of an agreement that critics say compromises the government's basic principles. Popular misgivings about funneling yet more money to Athens run deep in Germany, the euro zone country that has contributed most to Greece's two bailouts since 2010.

Berlin had cautioned that the talks must focus on "quality before speed", raising questions about whether it would seek to slow down the process by insisting on conditions attached to aid. "We're talking about a programme for three years, it needs to be negotiated thoroughly," Deputy Finance Minister Jens Spahn told Germany's ARD television shortly before the deal was announced. "It must be convincing that it's not just about Aug. 20."