Yuan devalued for the 3rd consecutive day under state control 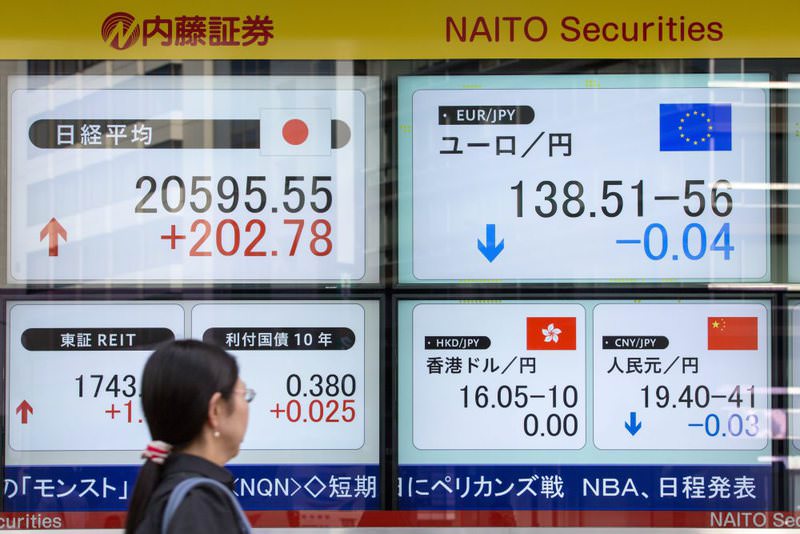 A woman looks at a stock market indicator board in Tokyo, Japan yesterday. China's central bank weakened the yuan for the third straight day, causing fears of an economic slowdown in the world's second largest economy.
by Daily Sabah with Wires
Aug 14, 2015 12:00 am

The People's Bank of China cut the reference rate of the yuan against the U.S. dollar, sparking some concerns over the strength of the Chinese economy. Interventionist policy is causing decline in foreign reserve in the Chinese treasury

China cut the reference point for the yuan against the dollar for the third consecutive day Thursday, reducing the rate by 1.1 percent from the previous session. The cut, which was smaller than those in the previous two days, and news China's central bank, the People's Bank of China (PBOC), intervened to stabilize the yuan on Wednesday reassured dealers Beijing would not allow its currency to plummet.

The depreciation of the Chinese yuan by more than 3 percent against the dollar since Aug. 11 underscores both the pressure on China's economy, and that the authorities remain committed to market-oriented reform, Fitch Ratings said. Fitch sees the reform process as aimed at tackling unresolved structural weaknesses. Allowing markets freer play at this juncture entails risks, but the authorities' calculation seems to be that the risks of doing nothing are greater.

Two previous cuts to the reference rate sparked concerns that China's economy is weaker than previously thought as well as fears that a sharp fall in the yuan could spark a race to the bottom in foreign exchange (forex) markets.

The reductions came after China, on Tuesday, adopted a more market-oriented method of calculating the currency rate, widely seen as a devaluation, which sent ripples through global financial markets.

The yuan-dollar exchange rate is controlled, with daily moves limited to within 2 percent of a central fixing rate set by the PBOC. The PBOC has presented the move as technical and operational in nature, highlighting that the market rate had deviated consistently from the central fix for several months and that the move would help push it closer to the market equilibrium. It may be possible for the PBOC to describe the development as technical, while Fitch suggests that the direction of the movement of the currency highlights wider pressures on the economy. The depreciation is limited so far, compared with some other large emerging markets. For instance, Brazil and Russia's currencies have depreciated by 35 percent and 45 percent, respectively, versus the dollar over the past year.

Changes in the method for setting the yuan-dollar exchange rate are in line with other steps to liberalize key areas of the country's capital markets. However, allowing market forces freer play implies higher volatility and uncertainty, Fitch said. The authorities' aggressively interventionist response to the bursting of a bubble in equities in July showed that there are still limits to allowing market forces more scope, Fitch underlined. The rating agency also stressed that allowing more market-driven volatility may seem counter-intuitive while the Chinese economy struggles to overcome the structural weaknesses that have built up during the phase of debt-driven, investment-heavy growth, including the likelihood of widespread debt problems in the corporate and local government sectors. However, Fitch believes that market forces are likely to be an essential part of the solution to these problems - by helping to allocate resources more efficiently and highlight where the problems are concentrated.

By keeping the nominal exchange rate more stable until Aug. 11, the authorities had to allow forex reserves to absorb the pressure that had emerged on external accounts. China's foreign reserves have fallen from an all-time high of $3.99 trillion at the end of June 2014 to $3.65 trillion as of the end of July 2015. The decline is not yet a negative factor from an external liquidity standpoint, as the reserve stockpile clearly remains immense. However, it has added to the challenge of managing macroeconomic policy by destroying liquidity in the domestic financial system, blunting the broader easing of monetary policy that began in earnest last November.