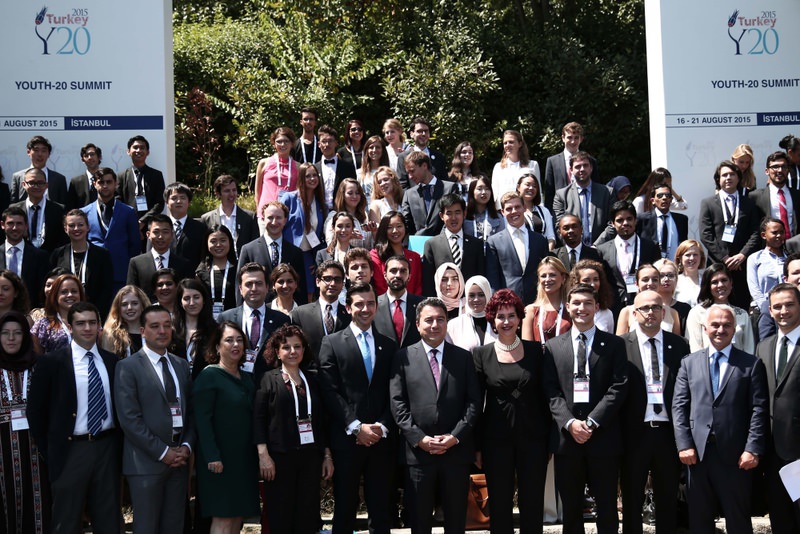 by Anadolu Agency Aug 18, 2015 12:00 am
Young people from G20 countries meeting in Turkey have warned their leaders about the burgeoning issues of youth unemployment and inequality. Youth20 "gives youth the opportunity to contribute and to actually be part of the decision-making process on policies to change the world," one delegate attending the Y20 Turkey Summit in Istanbul said.

"The whole idea is to provide G20 leaders a perspective from the stakeholders, who are youths [in this case]," Karina Blanco Ochoa, 24, from Mexico said. She was only one among a diverse group of keen young leaders from G20 countries participating in the Y20 Turkey Summit being held in Istanbul from Aug. 16-21.

Each country is represented by four or five people, making a total of around 100 delegates at the summit.

"It is a unique opportunity for young people to talk in a global summit, because in other global summits like the at the U.N., you do not have any youths talking about what our concerns are and what we could do to make it better," Laure Amme Parpaleix, 24, from France, said. She thinks that unemployment is a major issue in lots of countries, including France, an issue also handled by Turkey's G20 Sherpa Ambassador Ayşe Sinirlioğlu.

"Unemployment and inequality have been rising around the world," she said. "If we cannot include the young population in the labor force, in the social and political dimensions of our society, we cannot be inclusive." Stressing that the increasing youth unemployment is unsustainable, Sinirlioğlu said: "If we cannot find solution to this, then we will lose our feature generations for a long period of time, and this will be a loss for our economies, for our social and political systems."

The summit also pointed out that the group of young people that is at most risk in the labor market are those who are not highly skilled, as well as those who are neither employed nor in education and training and those working in the informal economy.

Sinirlioğlu said 150 million young people in G20 countries are in this group in addition to more than 100 million young people who are working in informal jobs. "Reducing the share of young people in these groups is a responsibility for all of us," she said. Turkey, which took over the rotating G20 presidency on Dec. 1, 2014, will host the tenth annual meeting of G20 heads of government on Nov. 15-16 in the southwestern city of Antalya.
RELATED TOPICS