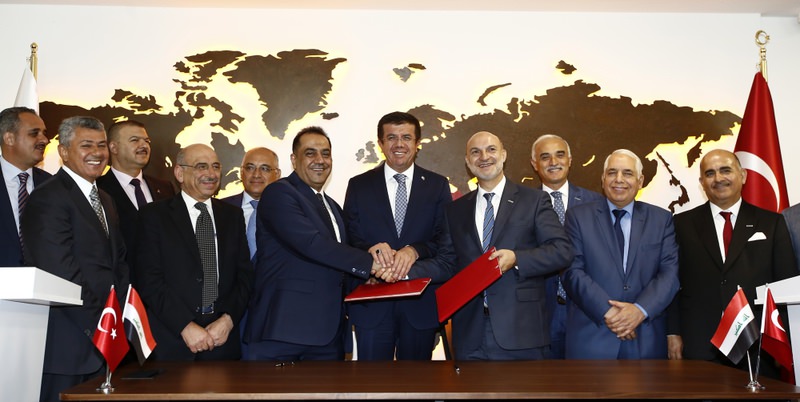 With the Turkey-Iraq Business Council assembled once again, Zeybekci stressed the importance of developing economic cooperation and trade with Iraq. Zeybekci called out to firms in both countries to work together

During the Turkey-Iraq Business Council's re-establishment ceremony, Economy Minister Nihat Zeybekci said the revitalization of the council is of the utmost importance for both countries. Underlining that Turkey and Iraq are not just allies but sibling countries, Zeybekci said "unlike friends and allies, siblings can't be chosen, they're given." Thus, both countries would benefit "tremendously" if they would act as siblings that get along and "share their heritage."

Zeybekci mentioned the interdependent nature of the Turkish and Iraqi economies, suggesting these are complementary economies. Whatever Iraq lacks, Turkey has, Zeybekci said, adding that many resources Turkey does not have are available in Iraq. "Looking at the future, we [the Economy Ministry] strongly believe that bilateral relations where the mutual benefit is at a maximum last a long time," Zeybekci said.

Reiterating their good wishes and hope for Iraq's political future, Zeybekci stressed that Turkey intends to develop relations with the Iraqi government as much as possible. "We regard Iraq's political stability as Turkey's as well, just as we regard their unity as ours," the economy minister remarked. "The same goes for welfare and economic growth."

Zeybekci said they have plans for a visit to Iraq and a desire to have a similar event take place in Turkey as well. He added that the potential of Turkish-Iraqi trade does not translate into trade volume at the moment, and called on the Turkish and Iraqi firms to come together and cooperate more. The minister also expressed that the ministry wants Turkey and Iraq to become prioritized trade partners in the following years.

Zeybekci underscored that Turkish and Iraqi companies should develop stronger partnerships. Stressing that the Turkey-Iraq Business Council has a prominent role to play in this regard, Zeybekci said the map of the today's world is "being re-drawn, and the pencil that draws this map is the economy." "Hence, if the relationship between the business worlds of two countries is strong, the political and other relationships become strong as well, Zeybekci said. "The primary affair between countries is their economic relationship. That Turkey and Iraq has the advantage of geography as well as the brotherhood of religion and history, generating negativity between our two countries is harder than making the Euphrates run backwards."

Zeybekci believes events such as the Conference on the Investment Opportunities in Iraq, which took place in April, should be organized in both Turkey as well, adding that it would be more beneficial if each sector came together separately during the meetings from now on.

Zeybekci also said the responsibility of the Turkey-Iraq Business Council should not only be put on the shoulders of the presidents. On the contrary, he emphasized that every member of the council bears the same responsibility and both investors and members should be brave. Additionally, he underlined that they will completely support any business fora that take place in Turkey or Iraq in the future.

Meanwhile, Foreign Economic Relations Board Chairman Ömer Cihad Vardan said they aim to strengthen the bond with Iraq, which is an inseparable part of Anatolian geography, through this agreement. "Turkey-based companies are the most effective companies that operate in Iraq," he said. "As the Turkish private sector, we place great importance on the restructuring of Iraq. While we are facing a new world, a new Middle East and a new Iraq, I believe that we can undertake many projects with a common vision in order to rebuild Iraq and help them to develop global connections."

Vardan said the Foreign Economic Relations Board works to deepen permanent and sustainable commercial relationships with Iraq, and highlighted that businesspeople from both countries will convene and sign an agreement to realize this goal. "The council will be the common voice of businessmen from different sectors who engage in business, make investments and trade together. Our council will lead the transition of the potential partnership of the two countries into fruitful investments," Vardan concluded.

Meanwhile, Turkey's exports to Iraq have decreased by 21.6 percent from $6.3 billion to $5 billion compared to the same period of last year.
RELATED TOPICS