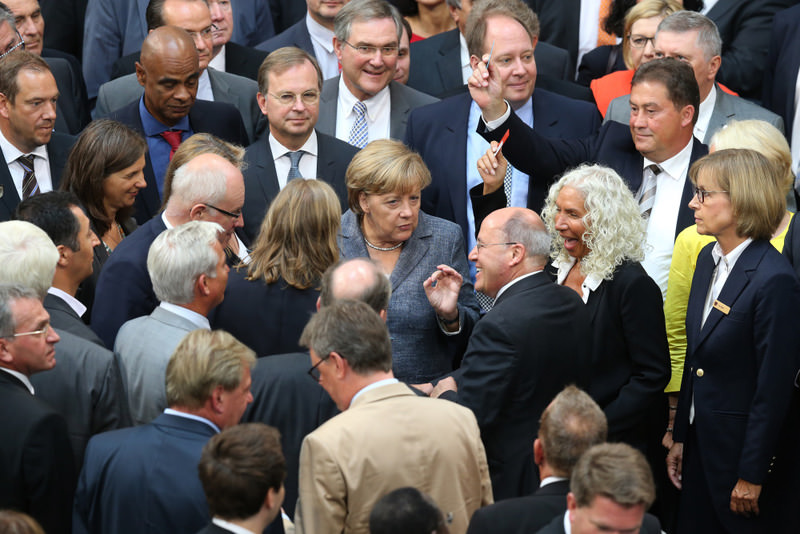 German Chancellor Angela Merkel talks to Gregor Gysi of the Left party (R) as she and members of the lower house of parliament cast their votes on Greece's third bailout program in Berlin.
by Associated Press Aug 20, 2015 12:00 am

With just one day left until a Greek debt repayment, the German parliament voted 453-113 in favor of the third Greek bailout. Minister of Finance Schaeuble said the deal is in the interest of both Greece and Europe

Germany's parliament overwhelmingly approved a third bailout for Greece on Wednesday, removing a key hurdle to providing new loans to the country and keeping it from defaulting on its debts in as little as 24 hours. The vote's result also dispelled speculation that Chancellor Angela Merkel would have difficulty getting her conservative bloc to sign on. Lawmakers voted 453-113 in favor, with 18 abstentions. The approval is among the last due from parliaments across Europe, with the Dutch scheduled to vote later Wednesday, after which Greece is expected to get the first installment of its new 86 billion euro ($95 billion) loans package.

The country needs the cash to make a debt repayment today. The board of the European bailout fund that will disburse the money will hold a teleconference on Wednesday night to discuss the matter.

The German approval was never in doubt but in a similar vote last month, 60 members of Merkel's conservative bloc voted against. Some local media had speculated that as many as double that could rebel this time as Germans are increasingly skeptical about giving Greece more money, but in the end only 63 from her bloc of 311 voted against.

German Finance Minister Wolfgang Schaeuble, a senior member of Merkel's Christian Democratic Party who has been one of the harshest critics of Greece, may have helped the cause as he lobbied hard ahead of the vote for the passage of Greek's third bailout in five years.

Schaeuble told lawmakers that approval of the three-year loan package is "in the interest of Greece and the interest of Europe." He noted that the Greek government has taken big steps over the past few weeks to restore trust with its creditors.

Schaeuble conceded that voting in favor of the bailout wasn't an easy one for him, but that "it would be irresponsible to not use the chance for a new beginning in Greece" in light of the fact that the Greek parliament has already backed a large chunk of reform measures demanded by creditors.

Germany is the largest single contributor to the bailouts and many in Schaeuble's party remain skeptical. Merkel's coalition partner, the Social Democrats, and the opposition Greens also backed the deal.

In the Netherlands, lawmakers interrupted their summer recess to debate the Dutch government's support for the Greek bailout. Geert Wilders, the anti-Islam lawmaker who is also a staunch opponent of the European Union and financial support for Greece, opened the debate by calling Prime Minister Mark Rutter "the Pinocchio of the Low Countries" for breaking an election pledge not to approve another bailout. Rutte does not formally need Parliament's support to sign off on the bailout, but is unlikely to do so without support of a majority of lawmakers. Ahead of the debate, Rutte's own party said it supports grudgingly the bailout, as does coalition partner the Labor Party and pro-European party Democrats 66, giving the government a comfortable majority in the 150-seat legislature. Under the terms of the deal, Greece has to make further spending cuts and tax increases and implement big reforms to its economy.

Schaeuble laid out his hope that the bailout will help turn the Greek economy around. Greece has spent much of the past six years in recession. Its economy is around a quarter smaller than it was and that's pushed unemployment and poverty rates sharply higher. "If Greece stands by its obligations and the program is completely and resolutely implemented, then the Greek economy can grow again," Schaeuble said. "The opportunity is there. Whether it will be used, only the Greeks can decide."

Greek Prime Minister Alexis Tsipras is mulling whether to call a vote of confidence in his government after a big rebellion among his radical left Syriza party over the bailout. There's also growing talk in Greece that Tsipras may opt for early elections as soon as next month now that the bailout deal is in place.

Tsipras' Syriza topped January's election on a promise to bring an end to hated austerity measures but after months of tortuous discussions with creditors, he was forced into a U-turn so the country could get the rescue money that maintains Greece's place in the 19-country eurozone.

Syriza to write off debts of those in need

Greece's governing party Syriza is preparing to give debt-struck citizens a relief: Up to 20,000 euros. The Greek Ministry of Economy's proposed law passed the parliament, and under the new law, the debts that are owed to public institutions and banks that are below 20,000 euros will be written off if the indebted have no income. The indebted citizens must apply to courts in order to benefit from this regulation, and have their debts to banks, insurance services, municipalities and tax offices settled.

Once the applicant is found fit by the court to receive the benefit, his or her debts will initially be frozen for 18 months. If there are no positive changes in the citizen's financial situation within that period, the government will write off the debts. The applicant must not own an immovable asset and must not have sold any within three years prior to the application. Greek government estimates 35,000 Greek citizens will be interested in applying for the aid program.

The regulation received criticism from inside Syriza, as there is a belief that some people who actually need this help may not access it due to the prerequisites, or some people who do not need the help might find a way to get around the safeguards.