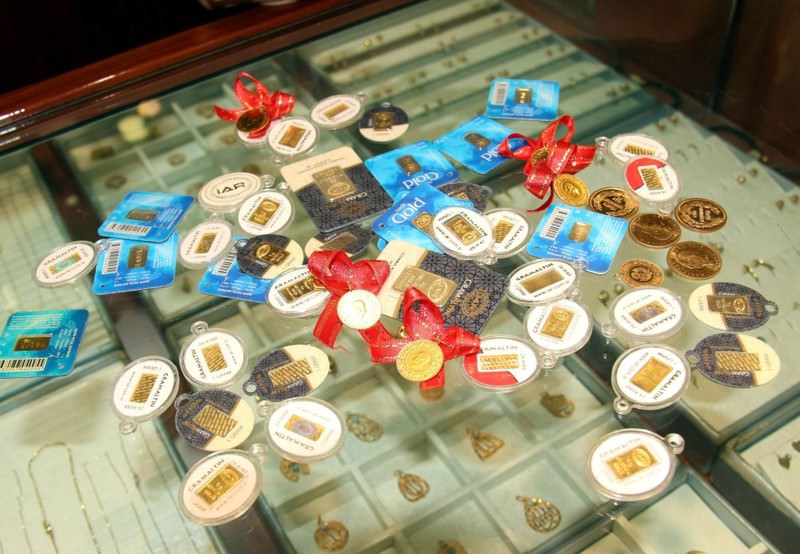 by Cafer Deniz Aug 22, 2015 12:00 am
There has been an upward trend in global markets on the price of precious metals per ounce from $1,115 to $1,155, amounting to an increase of roughly 4 percent during the week. China's currency devaluation played an important role. The U.S. Federal Reserve (Fed) minutes were another crucial element that influenced the market. According to the Minutes of the Federal Open Market Committee, they are not planning to hike interest rates until September. Therefore, the dollar continued to climb in Turkish markets, as it did in all global markets.

In the Turkish gold market, however, the price of the metal is not only affected by global factors, but also currency issues. Turkish financial markets have been witnessing a significant escalation in the dollar-Turkish lira parity, particularly since last week. The rate was 2.82, but the parity rose to about 2.91 on Friday. Hence, the dollar is creating intense pressure on the Turkish lira.

Both Prime Minister Ahmet Davutoğlu and Economy Minister Nihat Zeybekci stressed that "this is because of speculation and there is no need to intervene in the currency because it will find its way in free market conditions."

At the end of the day, gold prices with the Turkish lira hit a peak at TL 110 ($37.71) per gram on Friday morning. It then stabilized at about TL 108, but not before it almost hit a record level since 2011. Global and local indicators suggest prices will experience a historical record soon.

The increase in the price of gold in Turkish lira is due to the high dollar-lira parity since the lira has been losing its value against the dollar.

"As the yellow metal has been fluctuating for six weeks, and peaked at TL 110, the heart of Turkey's gold market [Istanbul's Grand Bazaar] is not busy these days. Jewelry customers wait due to reasons like political uncertainty. Compared to August 2014, we have been facing market stagnation," said Ömer Suha Kurnaz, who works for a jewelry store in the Grand Bazaar, which is a uniquely dynamic and fast-moving trading environment that is highly price-sensitive.

"In the middle of June, Turkish gold holders rushed into us to sell gold because of the jump to TL 104. Nevertheless, the month after, gold hit rock bottom at TL 95 since January 2014. This kind of fluctuation is unusual for Turkish gold markets; surely some gold investors bought whereas most of the others did not repurchase to wait for a larger fall in the price of gold. The latter is regretful but the former is joyful. Now, people neither buy nor sell," he added.

Price volatility is also seen among traditional Turkish gold coins, which are 1.75 grams on average. People who bought at TL 130 sold at TL 170. It is a Turkish tradition that when a couple gets married, their relatives and friends give them gold coins to celebrate. However, now they prefer to give "gram gold," 1 gram of gold jewelry, instead of gold coins at weddings since the price of gold coins is increasing.

Nonetheless, gold-eagle.com gold market experts warn that "certainly the sentiment has been super bearish. Needless to say, gold is a wonderful contrarian play here, but typical final weeks in any large movement [up and down] are usually characterized by extreme irrationality and exploding volatility."