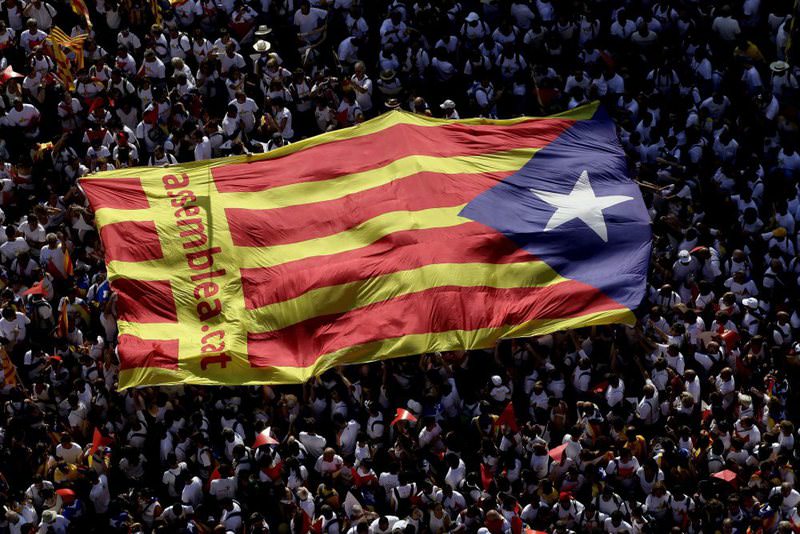 by Sep 17, 2015 12:00 am
The rise of far-left party Podemos in Spain along with Catalonia's separatist drive is unsettling investors who fear the country could change course in a "Greek-style scenario" after upcoming elections.

Spain, the fourth-biggest economy in the eurozone, returned to growth in 2014 after a five-year-decline. Consumer spending is up, exports have jumped and manufacturing output has increased.

The government forecasts an economic expansion of 3.3 percent this year – more than twice the average growth rate predicted for eurozone countries.
But analysts warn the recovery could be derailed if Podemos does well in December's general election and pro-secession parties win a majority in the Catalan parliament in a Sept. 27 regional vote.

"Investors are really afraid of a Greek-style scenario," said Credit Agricole analyst Leopold Jouven. "That a radical left party comes to power and nips the recovery in the bud by trying to change everything."

Podemos, which is close to Greece's hard-left Syriza party and has around 16 percent support, wants to loosen the grip of austerity introduced by Prime Minister Mariano Rajoy's conservative government, in power since 2011.

After local elections in May, Podemos allied itself with the main opposition Socialists to drive Rajoy's Popular Party from power in several regions and cities, including Madrid and Barcelona.

Private Swiss bank Mirabaud warned in a research note of the "growing political risk from the rise of populist left-wing parties and the possible victory of these parties and the Socialists in the general election."

Spain's borrowing costs have risen in recent months and have exceeded those of Italy's due to the political uncertainty engulfing the country.

Jouven said that was "paradoxical, given that the Spanish economy is in a strong recovery" while the Italian economy is struggling to pull out of its longest post-war recession.

Economy Minister Luis de Guindos said the rise "has more to do with the uncertainty of the general election than with the Catalan issue."

Credit rating agencies and the International Monetary Fund (IMF) were concerned "that a government that reverses reforms will emerge," he added in an interview published Sunday in Catalan daily El Periodico.

In another sign of market jitters, investors pulled 21.7 billion euros ($24.2 billion) in assets out of Spain in June, according to Bank of Spain figures.
By comparison, investors poured 1.3 billion euros into the country during the same month last year.

"The results of the [May] regional and local elections may have had a negative impact," Spanish bank Santander said in a research note to clients.
The rise of Podemos and the centrist Ciudadanos party has eroded the bipartisan system that has dominated Spain since the country returned to democracy following the death of longtime dictator General Francisco Franco in 1975.

Polls suggest the next general election will be a four-way race in which no party wins a majority, paving the way for a fragmented parliament.
"Spain is not used to this type of political situation," Jouven said.

Adding to the political uncertainty is the drive for Catalonia to break away from Spain. The region is home to around 7.5 million people and accounts for a fifth of Spain's economic output, but is heavily indebted. Hundreds of thousands of flag-waving Catalans thronged the streets of Barcelona on Friday demanding independence ahead of regional elections.

Catalonia's main pro-independence parties have agreed for the first time to run on a single unified list dubbed "Together for the Yes" in the polls. If pro-independence candidates win a majority of seats in the Catalan parliament, their goal is to push through an 18-month road map for secession. Polls show they are on track to win a slim majority in the 135-seat regional parliament.

The European Commission has warned that Catalonia would no longer be an EU member state if it became independent from Spain. It said the new state would have to apply to join the bloc, raising the question of whether Catalonia would keep the euro as its currency.

The fears over Catalonia are reflected in research notes from ratings agencies in their assessments of its financial stability. Moody's and Standard & Poor's classify bonds issued by Catalonia as a risky "speculative investment."
Last Update: Sep 17, 2015 1:30 am
RELATED TOPICS