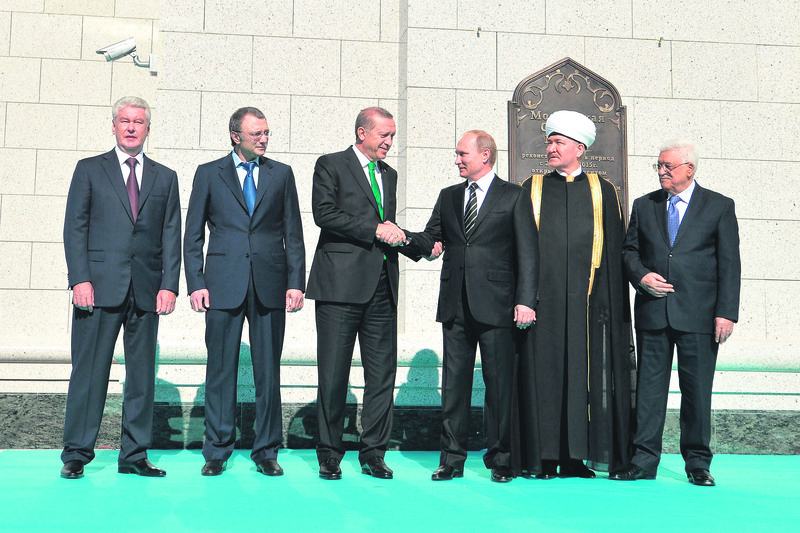 President Erdoğan paid a one-day visit to Moscow where he urged for the trade volume between Turkey and Russia to maintain its level despite global economic problems. The Turkish Stream was also on the agenda

President Recep Tayyip Erdoğan said bilateral relations between Turkey and Russia have reached an important stage over the past 10 years, adding: "Although negative economic developments in the world have had a slightly adverse impact on our relations, our trade volume maintained its growth within this period."

Erdoğan paid a one-day visit to the Russian capital on Wednesday. Following the inauguration of the Moscow Central Mosque, Erdoğan held an hour-long meeting with his Russian counterpart, Vladimir Putin.

Referring to the fact that Turkey's trade volume with Russia amounted to $31 billion in 2014 and $11 billion in the first half of the year, Erdoğan said Turkey aims to achieve $100 billion in bilateral trade by 2020.

Extending his thanks to Erdoğan for attending the inauguration ceremony and for his contributions to its construction, Putin said the visit was an opportunity to discuss bilateral relations and international issues. Putin also stressed the two countries continuously hold top-level intergovernmental and inter-parliamentary talks, and he wished Turkey good luck in the upcoming general elections. Putin underlined that the trade partnership between Turkey and Russia continues and the mutual investment volume increases despite some commercial and economic troubles.

Other than trade targets, the agenda of the two leaders included crucial points regarding natural gas projects. Turkey and Russia have been working on the Turkish Stream pipeline project since December, which is set to carry Russian natural gas to Europe via the Turkish-Greek border. Putin had announced the project during his official visit to Turkey in December by abandoning the old version, the South Stream pipeline project, which was supposed to link Russia with Europe via Bulgaria. The two countries agreed to the Turkish Stream, which will have four pipelines with a total capacity of 63 billion cubic meters; however, another issue regarding natural gas has blocked the project. Russian natural gas giant Gazprom has not yet implemented the promised 10.25 percent discount for Turkey's gas purchases. The two leaders were set to discuss these issues during their meeting in Moscow, but no comments were made after the meeting at the time of print.
RELATED TOPICS