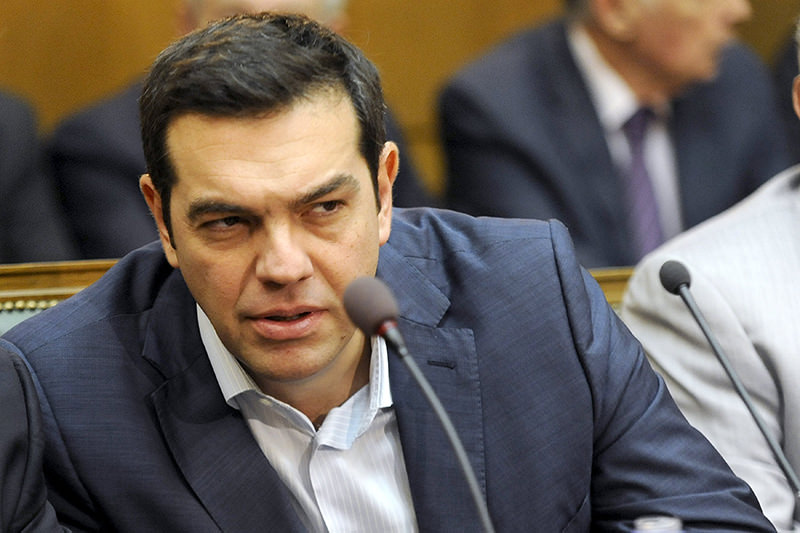 Greek Prime Minister Alexis Tsipras looks on during the first meeting of the new cabinet in the parliament building in Athens, Greece September 25, 2015 (Reuters Photo)
by Associated Press Sep 25, 2015 12:00 am
Greece's newly re-elected prime minister pledged Friday to fast-track negotiations with international bailout creditors so the country can be in a position to get some much-needed debt relief.

Alexis Tsipras told his first Cabinet meeting that his aim is to have steered the country out of its crisis by 2019 when his four-year mandate ends.

"This is an absolutely achievable target, provided we dare carry out major reforms and changes," Tsipras said, in a speech liberally punctuated with references to speed. "We must work to re-establish, as soon as possible, financial stability, and restore normality to the banking system."

He called the snap polls seven months into his first mandate, after hardline left-wingers in his Syriza party rebelled against a policy U-turn that saw Greece signing a third international bailout accompanied by new austerity measures.

The July agreement, which was concluded under duress as bankruptcy and isolation from the rest of Europe loomed, came after months of negotiations with creditors that hammered the economy and led to the imposition of strict capital controls to prevent a bank run by worried depositors.

Tsipras pledged to respect Greece's commitments for further spending cuts, tax hikes and reforms, and said his first, urgent priority will be to launch talks on reducing the country's crippling debt burden and boost its battered banks.

Tsipras said implementing "without delay" the country's bailout agreement in order to "speedily conclude" the first review of Greece's progress by bailout inspectors.

"That will allow the process to go ahead speedily to open, as soon as possible, the crucial discussion on reducing Greece's debt, as foreseen in the (July bailout) agreement," he said.

Greece's European creditors have promised to look again at Greece's debt if the country gets past its first review. Though an outright cut in the country's debt has been ruled out, Tsipras will be hoping to get relief in the form of longer repayment periods and cuts in the interest rates on the loans.

"Ministers' job is not to appear on TV," Tsipras said. "It's to be at their ministries ... to solve the problems of the Greek people."

Greece has depended on bailout loans from its European partners and the International Monetary Fund since 2010 when it was unable to borrow in international money markets following the global financial crisis and mismanaging its public finances.

The rescue loans have all come with strings attached painful spending cuts, tax hikes and income reductions. In the five years since the first agreement the Greek economy has contracted by a quarter while one in four private sector workers have lost their jobs.
Last Update: Sep 25, 2015 5:06 pm
RELATED TOPICS