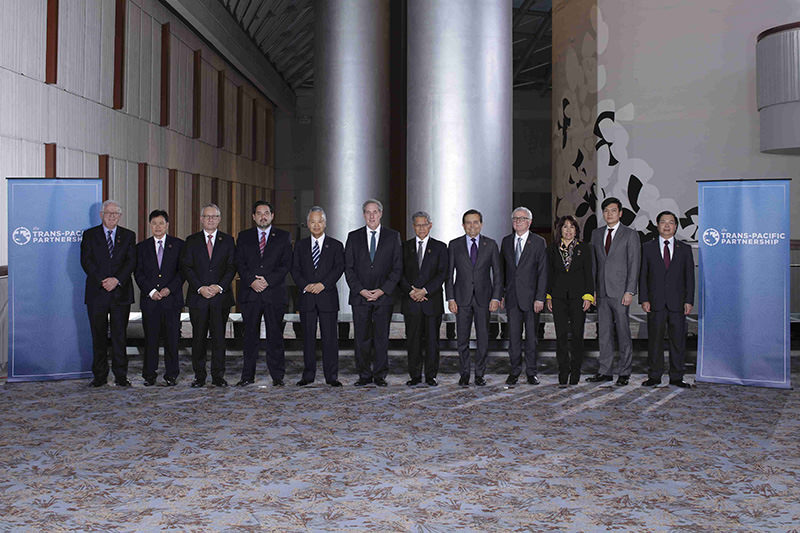 by Oct 05, 2015 12:00 am
Pacific trade ministers reached a deal on a sweeping Pacific trade pact that will cut trade barriers and set common standards for 12 countries, an official familiar with the talks said on Monday.

A dozen Pacific Rim nations prepared on Monday to announce the most sweeping trade liberalization pact in a generation, a deal that could reshape industries and influence everything from the price of cheese to the cost of cancer treatments.

The Trans-Pacific Partnership seeks to cut trade barriers and set common standards for 40 percent of the world economy and would stand as a legacy-defining achievement for U.S. President Barack Obama, if it is ratified by Congress.

Lawmakers in other TPP countries must also approve the deal.

The final round of negotiations in Atlanta, which began on Wednesday, had snared on the question of how long a monopoly period should be allowed on next-generation biotech drugs, until the United States and Australia negotiated a compromise.

The TPP deal has been controversial because of the secret negotiations that have shaped it over the past five years and the perceived threat to an array of interest groups from Mexican auto workers to Canadian dairy farmers.

Although the complex deal sets tariff reduction schedules on hundreds of imported items from pork and beef in Japan to pickup trucks in the United States, one issue had threatened to derail talks until the end - the length of the monopolies awarded to the developers of new biological drugs.

Negotiating teams had been deadlocked over the question of the minimum period of protection to the rights for data used to make biologic drugs, made by companies including Pfizer Inc , Roche Group's Genentech and Japan's Takeda Pharmaceutical Co.

The United States had sought 12 years of protection to encourage pharmaceutical companies to invest in expensive biological treatments like Genentech's cancer treatment Avastin. Australia, New Zealand and public health groups had sought a period of five years to bring down drug costs and the burden on state-subsidized medical programs.

Negotiators agreed on a compromise on minimum terms that was short of what U.S. negotiators had sought and that would effectively grant biologic drugs a period of about years free from the threat of competition from generic versions, people involved in the closed-door talks said.

The Washington, D.C.-based Biotechnology Industry Association said it was "very disappointed" by reports that U.S. negotiators had not been able to convince Australia and other TPP members to adopt the 12-year standard approved by Congress.

"We will carefully review the entire TPP agreement once the text is released by the ministers," the industry lobby said in a statement.

Separately, the United States, Mexico, Canada and Japan also agreed rules governing the auto trade that dictate how much of a vehicle must be made within the TPP region in order to qualify for duty-free status.

The North American Free Trade Agreement between Canada, the United States and Mexico mandates that vehicles have a local content of 62.5 percent. The way that rule is implemented means that just over half of a vehicle needs to be manufactured locally. It has been credited with driving a boom in auto-related in investment in Mexico.

The TPP would give Japan's automakers, led by Toyota Motor Corp, a freer hand to buy parts from Asia for vehicles sold in the United States but sets long phase-out periods for U.S. tariffs on Japanese cars and light trucks.

The TPP deal being readied for expected announcement on Monday also sets minimum standards on issues ranging from workers' rights to environmental protection. It also sets up dispute settlement guidelines between governments and foreign investors separate from national courts.