Spain hopes movies will work magic on the economy 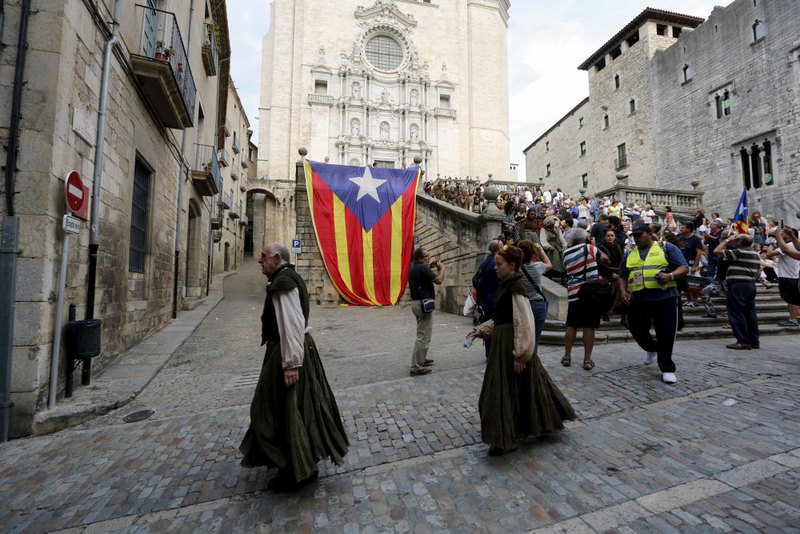 Extras make their way to Girona Cathedral, walking pass a Catalonia pro-independence flag while taking part in the filming for Season 6 of the HBO TV series ,Game of Thrones, in Girona, northeast of Spain.
by reuters
Oct 20, 2015 12:00 am

Since earlier this year, the Spanish government has offered tax breaks for cinema and animation producers, hoping this will play a modest role in stimulating an economy that is recovering from crisis

Half a century ago, Hollywood came to Spain, turning Madrid into revolutionary Russia and the arid south into the Wild West. Now the government is trying to lure the movie industry back with a fistful of dollars. Tinseltown and television never gave up on Spain; its dry climate, rugged landscape and historical architecture have attracted HBO's hit medieval fantasy "Game of Thrones" for a second year in a row. In one Danish series, southern Spain doubled as Afghanistan, complete with Taliban fighters.

But the heyday of the mid 1960s, when British director David Lean filmed "Doctor Zhivago" in the capital and Italian Sergio Leone shot a series of spaghetti Westerns including "The Good, the Bad and the Ugly" around the country, are long gone.

Now Spain is trying to catch up with locations such as the United States and Canada. Since earlier this year, the government has offered tax breaks for cinema and animation producers, hoping this will play a modest role in stimulating an economy that is recovering from crisis but still relies excessively on tourism for jobs.

Rosa Jaen remembers the winter of 1965 when, nearly 50 years after the Russian revolution, hundreds of Bolshevik protesters spilled onto the streets of Canillas, a Madrid suburb. Prevented by Cold War politics from filming in Moscow, Lean had brought "Doctor Zhivago" to her doorstep. As a teenager, Jaen came to gawp at the shoot and its replica Kremlin. At a time when Spain was still poor, some of her neighbours earned enough as extras to head for one of the resorts then springing up on the Mediterranean coast.

"Many families here couldn't afford even the smallest luxuries," said Jaen, 65. "Thanks to Moscow, many were able to go to the beach in Benidorm, or buy a fridge." By 2007, tourism and construction contributed more than 30 percent of Spanish gross domestic product. A property crash then wiped out many construction jobs and tourism is not enough to complete the recovery from a double-dip recession.

The incentives to create jobs in film production are only a small push after a wave of spending cuts by the centre-right government, which despite being credited with important economic reforms has done little to foster new industries desperately needed to bring down unemployment from over 22 percent. With a general election due on Dec. 20, Spain is offering a 15 percent tax rebate on foreign filmmakers' production costs, though that is less generous than many schemes elsewhere. The ceiling of 2.5 million euros ($2.8 million) per film is also a stringent limit for blockbuster budgets in the tens of millions. "For a studio working on a large scale production, it does not allow you to really benefit," said Ignacio Perez Dolset, founder of Ilion Animation Studios, whose 350 employees are working on a secret project commissioned by Paramount.

According to the Spain Film Commission, the country was by last year losing out on about 80 percent of possible movies to other locations. It believes the tide is turning, but says the government needs to raise the rebate to support the industry.

Many point to the Canary Islands. The autonomous Spanish region brought in its own film breaks several years ago, immediately attracting several U.S. productions. It followed this up by increasing the tax rebate to 35 percent of costs, up to a 4.5-million-euro limit.

The city recently masqueraded as Athens for the latest Jason Bourne spy thriller; Bermudez expects the five-week shoot to bring about 14 million euros to the island, thanks partly to spending on hotels and restaurants. About 350 people were hired as crew and 600 others as extras.

Peter Welter, whose Malaga-based Fresco Film company is working on season six of "Game of Thrones", said the new national incentives had been important to the decision to shoot in Spain again. Locations include arid Almeria in the south - home to many of the spaghetti Westerns - and hundreds of people will chip in as extras over the eight-week shoot. Back in Canillas, only the over 60s really recall the circus surrounding Doctor Zhivago, which starred Omar Sharif in the title role and Julie Christie as the lovelorn heroine Lara. But the movie did leave its mark in one way, residents say -an unusually high proportion of local ladies go by the name of Lara.