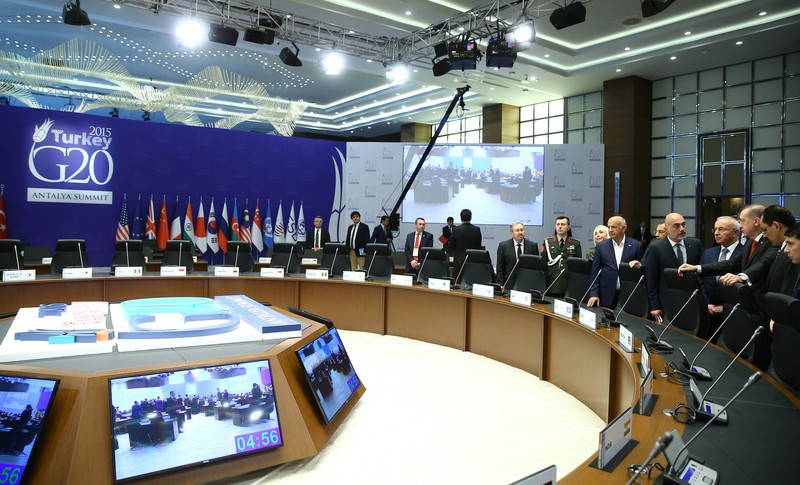 by daily sabah
Nov 13, 2015 12:00 am
As leaders of the world's largest 20 economies start to arrive in Antalya for the crucial G20 Summit that takes place on Nov. 15 and 16, the hotels are making sure that the world leaders and other guests will enjoy full security and comfort during the summit.

For the hosting country, the G20 Summit not only means a great opportunity for promotion but also a boost for economy. The event in Antalya is expected to bring 200 million euros ($215 million) to the country's economy.

The Kaya Palazzo Hotel's chairman of the executive board, Burak Kaya told Sabah daily that, the hotel will become a center for the press since all press conferences during the summit will take place at the hotel. Kaya said that significant technical investments have been made for uninterrupted live broadcasting at the convention center, while adding that the press and media from 150 countries will stay at the Kaya Palazzo throughout the summit.

Kaya said that a 6,000-square-meter Turkish tent has been established at the Kaya Pazallo Hotel's garden to host the world leaders, their staff and journalists and for them to enjoy their free time. The guests will also get to experience Turkish cuisine and various Turkish arts during their stay in Antalya.

The summit will bring 19 leaders of the most developed countries in the world and also the European Union Commission as an institution. Azerbaijani President İlham Aliyev will also attend the summit as the 21st country with the invitation of President Recep Tayyip Erdoğan. Along with making up 85 percent of the global economy, 80 percent of global trade is carried out by G20 countries.

There are more than 50 luxury hotels in the Belek resort town, where the summit will be held. The hotels offer various leisure activities such as golf, swimming, tennis, beach volleyball and offer various ultra-luxury villas, suites and king's suits, some of which have been designed by famous, leading architects. The luxury villas, with either views of the sea or the forest, range between 45 and 300 square meters, are equipped with bullet-proof windows, voice-operated lights, smart automation and climatization systems. Prices for the villas and king's suits where world leaders will stay range from $2,500 to $30,000 per night. Visitors can also visit various historical sites such as the ancient Aspendos theatre and the ancient city of Perge.

An application named "G20 Antalya Summit" has also been developed for smartphones. The app includes the summit program, transportation, maps and weather information.

Meanwhile, high-end security measures have been taken in Antalya for the summit. A total of 13,400 police officers including 1,400 traffic police, will be on duty during the summit 24/7. The Belek resort has been declared as a red zone. No visitors without an accreditation card will be able to enter the hotels. The International Terminal of Antalya Airport has been reserved for the G-20 Summit. A total of 350 new surveillance cameras and face detection systems have been set up in the region. Coast guard ships will also be deployed against possible threats coming from the sea.