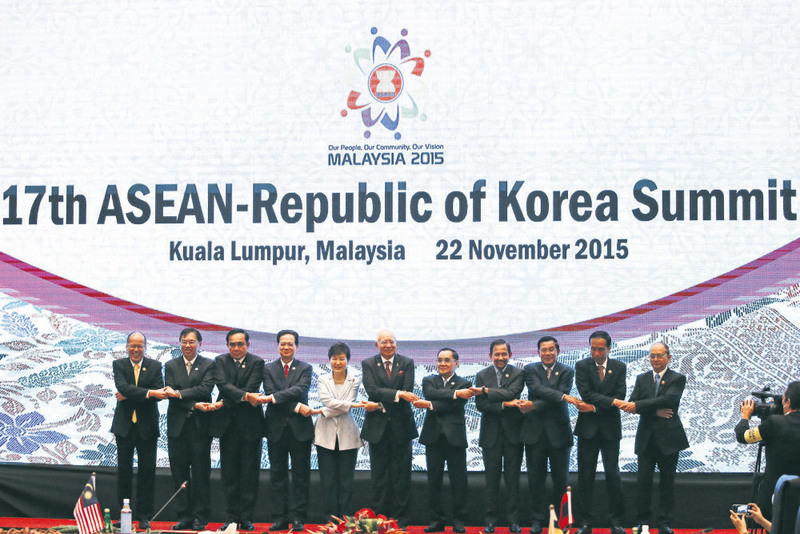 South Korea President Park Geun-hye (C) poses for a photo with ASEAN leaders during the 17th ASEAN-Republic of Korea Summit at the 27th ASEAN summit in Kuala Lumpur, Malaysia.
by Associated Press Nov 23, 2015 12:00 am

Southeast Asian nations have established a formal community that attempts to create freer movement of trade and capital in an area of 625 million people with a combined economic output of $2.6 trillion

Thirteen years after the idea was mooted, Southeast Asian leaders on Sunday formally created a unified economic community in a region more populous and diverse than the European Union or North America, and with hopes of competing with China and India.

The 10 leaders in the Association of Southeast Asian Nations signed a declaration during their summit establishing the ASEAN Economic Community, as part of a larger ASEAN Community that aims for political, security, cultural and social integration.

Summit host Prime Minister Najib Razak of Malaysia hailed the ASEAN Community as a "landmark achievement," and urged members to accelerate integration. "The region is primed to expand exponentially," he said.

The community, known by its acronym AEC, is already a reality and many of its fundamentals have been applied in the region such as removal of tariff barriers and visa restrictions among others. It has also led to greater political and cultural cooperation. AEC will bolster income and employment, and provide the region with stronger economic muscle in facing the other giants, said Michael G. Plummer, a professor of international economics at the Europe Center of Johns Hopkins University, based in Bologna, Italy.

"ASEAN integration will help balance the economic power of China and India. Individually, ASEAN countries are, perhaps, too small to be important players in the economic and security game, but as an integrated group of more than half a billion people, they would be in the major league," Plummer said.

But there is a long way to go before the AEC becomes fully functional after becoming a legal entity on Dec. 31. The region's diversity can be a hindrance sometimes. ASEAN has 630 million people, speaking different languages, following various faiths and governed by various systems, including rambunctious democracies, a military dictatorship, quasi-civilian, authoritarian, monarchy and communism. "The AEC is arguably the most ambitious economic integration program in the developing world. But implementation of the AEC is increasingly uphill. Much remains to be done and the region faces many challenges in finishing. The AEC is a process," Plummer said.

It falls short in more politically sensitive areas such as opening up agriculture, steel, auto production and other protected sectors. ASEAN citizens will be allowed to work in other countries in the region, but will be limited to jobs in eight sectors, including engineering, accountancy and tourism. This accounts for only 1.5 percent of the total jobs in the region, and host countries still can put up constitutional regulatory hurdles restricting the inflow of talent.

Intra-regional trade has remained at around 24 percent of ASEAN's total global trade for the last decade, far lower than 60 percent in the European Union.

ASEAN members also struggle to resolve diplomatic flare-ups among each other such as border disputes between Cambodia and Vietnam, or Indonesia's inability to fight annual forest fires that spew noxious haze for months over Malaysia, Singapore and Thailand.

Plummer said progress has been slow in in services liberalization. Cross-border flow of investment is also restricted by large exclusion lists and caps on foreign ownership. Government procurement and curbing monopolies by state-owned enterprises are highly sensitive and untouched, he said. Although the four poorer economies Cambodia, Laos, Myanmar and Vietnam have until 2018 to bring down tariffs, economic integration could further reinforce income equalities in the region, he said.

AEC "is not the finished article. Neither is it officially claimed to be. There is much work to be done," said Mohamad Munir Abdul Majid, chairman of a council that advises ASEAN on business matters. "There is a disparity between what is officially recorded as having been achieved ... and what the private sector reports as their experience."

There are also other hurdles, such as corruption, uneven infrastructure and unequal costs of transportation and shipping. A wide economic gulf divides Southeast Asia's rich and middle income economies Malaysia, Indonesia, Singapore, Brunei, Thailand and the Philippines and its four less developed members, Communist Vietnam and Laos, Myanmar and Cambodia.

The AEC was envisaged in 2002 and a blueprint created in 2007 to face competition from China and India for market share and investments. While China's economic growth is expected to slow to an average of 6 percent annually over the next five years, India's expansion is likely to pick up to 7.3 percent in the same period, according to the Organization of Economic Cooperation and Development.

The AEC is one of the three pillars of the ASEAN Community, which was created by the signing of the declaration Sunday. The other two pillars are political-security and socio-cultural.