‘Crisis with Russia is an opportunity for Turkey' 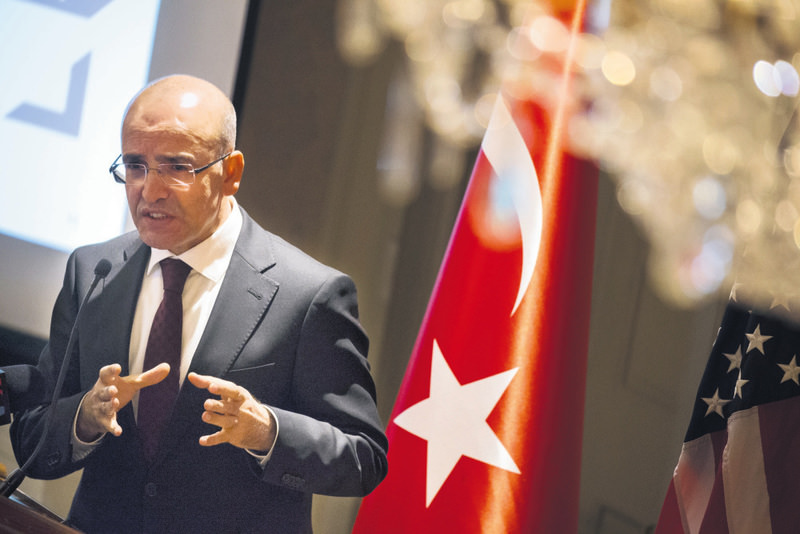 by daily sabah Jan 09, 2016 12:00 am
Speaking to the Turkish press during his visit to Washington, D.C., Deputy Prime Minister Mehmet Şimşek commented on whether Russian sanctions were a grave threat to the economy. Şimşek said in accordance with the preconceived scenarios, the sanctions' effect on national income would be miniscule, around 0.2 percent. Moreover, as each crisis includes an opportunity, the government is striving to diversify trade markets and decrease foreign dependency, especially in the energy market. Şimşek said his visit and the meetings he held with United States Secretary of Commerce Penny Pritzker and Secretary of the Treasury Jack Lew were very positive and productive. He added that he met with members of the U.S. Chamber of Commerce, U.S.-Turkish Business Council and the Independent Industrialists and Businessmen's Association (MÜSİAD).

Furthermore, Şimşek said trade between Turkey and the United States is way below the realized potential. "There is great potential, yet when mutual performances in foreign trade and investments of both countries are considered, the actual is not even one-tenth of the potential. We need to rediscover the U.S.," Şimşek said. He added that while Europe is Turkey's core market and the Middle East and Africa are developing markets, Asia and the U.S. have been neglected by the Turkish business world; therefore, they need to focus on both Asia and the Americas. He also added that the government is willing to help diversify markets to improve trade.

Moreover, Şimşek said he would solely follow the implementation of reforms included in the Justice and Development Party's (AK Party) election promises, since more structural reforms are crucial for Turkey to enter high-income countries. A deputy prime minister has also been assigned for the first time to observe the implementation of reports. The Economic Coordination Board will also be checking the implementation of these reforms, which will be presented to Parliament in the next three to six months and mainly focus on increasing transparency, fighting against corruption, public purchases, employment opportunities and more.

Around 2 million people have lost their jobs since 2007 in the European Union, yet Turkey created 7 million new jobs, according to Şimşek, who added that despite such positive figures, they would continue focusing on possibilities to increase employment. He emphasized that Turkey's performance was successful when examined through the lens of the public deficit, and the budget in 2015 was almost at a balanced level. Additionally, the government is prioritizing education in public expenses, as 25 percent of income tax is currently spent on education. Şimşek said as education levels increase, per capita income increases, hence why it is a government priority. Also, while speaking to press, Şimşek answered a question asked by a Kurdish journalist from Iran in Kurdish. Adding that Turkey needs to take various further steps to become one of the top 10 largest economies in the world, Şimşek said the best global practices should be adopted to accomplish this objective.
RELATED TOPICS