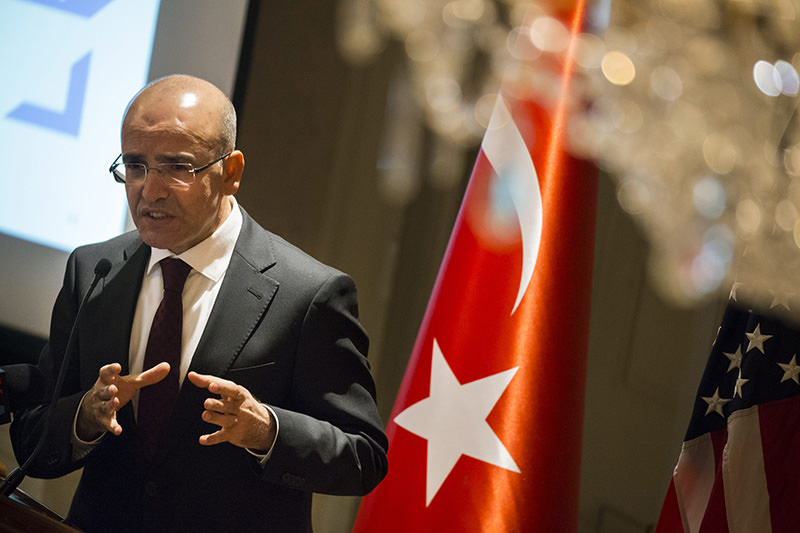 Increasing the pace of growth and lowering the inflation rate will be key issues on the economic agenda for the next three years, while the positive developments from 2015’s last quarter were reflected in growth and inflation figures

Mehmet Şimşek, deputy prime minister in charge of the economy, announced on Monday that Turkey has revised its 2015 growth forecast from 3 percent to 4 percent while the government predicts that the gross domestic product (GDP) will increase to 4.5 percent in 2016 and 5 percent by 2017 and 2018.

Şimşek's statement came while the country's 2016-2018 medium-term economic program was being announced in Ankara alongside Finance Minister Naci Ağbal and Development Minister Cevdet Yılmaz. "The key priorities of this program are financial discipline, the increase of growth potential, inflation reduction and further reducting of the current account deficit," Şimşek said.

He added that there are three dimensions of structural reforms that are needed in order to achieve the goals of the program which include a 25-point transformation program of which around 300 micro measures have already been implemented, a new reform program which was announced by Prime Minister Ahmet Davutoğlu after the formation of the government and the European Union accession process, which includes a revision of the Customs Union treaty, visa exemption policies, the opening of new chapters and improvement to public institutions and services.

Speaking about the 2016 Action Plan, Şimşek underlined that the goal of the program is to establish Turkey as a high-income country through strong and sustainable growth which benefits all sectors of society. He pointed to recent labor market reforms that included a minimum wage increase, working model flexibility, severance pay reform, private employment offices, on-the-job training programs and programs to recruit a qualified workforce from abroad.

In 2016, Şimşek predicts that growth will mainly be driven by domestic demand but a portion of that growth will also come from foreign demand, adding that the 5 percent goal for 2017 and 2018 will be achieved through investments and increased efficiency.

"The increase in food prices has been evaluated. Necessary precautions will be taken this year regarding this issue," the minister said. "The decrease in oil prices is very important. There is also a decrease in the prices of goods. This decline accelerated in the second half of 2014. China has been also effective in this regard. There is a slowdown in the global economy."

One of Turkey's priorities is to reduce inflation, according to Şimşek. "Inflation was realized well above the targeted level. In the medium-term economic program, we will work harder to decrease the inflation rate to 5 percent. We will decrease the inflation rate and give importance to raising efficiency," he said. "Growth in the eurozone is expected to recover for the upcoming period. That is naturally good news for Turkey because the European Union is Turkey's biggest trade partner. When we consider the next three years, the contribution of developing countries to global growth will slow down, while the contribution of developed countries will increase."

Highlighting the importance of investment funding through domestic savings, Şimşek said additional measures will be implemented in that regard.

Speaking at the same meeting, Ağbal said the government budget ran a deficit of TL 22.6 billion ($7.495 billion) in 2015, while the primary surplus was TL 30.4 billion. Ağbal added that budget revenues were TL 483 billion and expenses were TL 506 billion, stressing that tax revenues increased 15.6 percent to reach TL 407.5 billion. He added that TL 10.8 billion is expected to be transferred from the privatization fund in 2016.