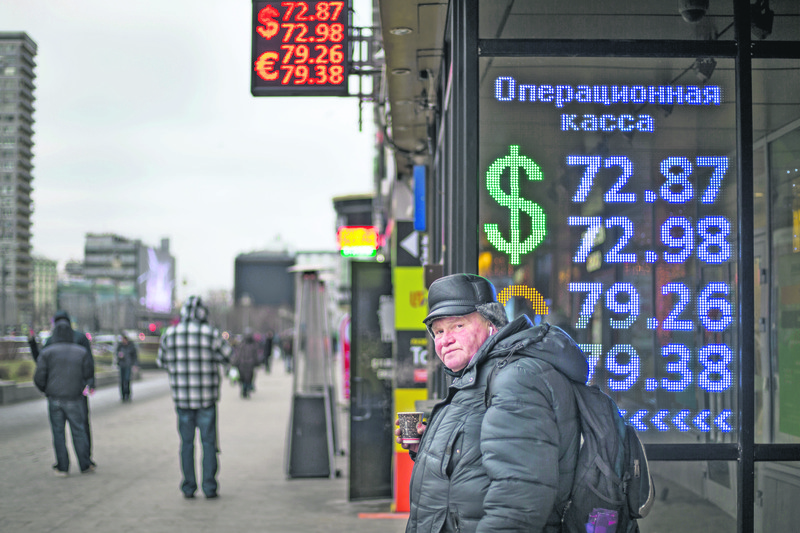 A man warms himself with a cup of hot coffee by an exchange office sign showing the currency exchange rates of the ruble, dollar, and euro in Moscow, Russia, Dec. 30.
by Daily Sabah with Agencies Jan 12, 2016 12:00 am

Global markets continued to fluctuate on Monday, with emerging market currencies leading the losses of value as the U.S. economy continues to experience its strongest position in the last 10 years

Amid ongoing concerns of shockwaves from China due to low growth rates added by strong economic figures from the United States, emerging markets currencies sank deeper on Monday. The dollar hit a three-month high against the Turkish lira on Monday at 3.0451. The rate started at 3.0255 on Monday and reached as high as 3.0451 in the early hours of trading. It later fell back to the 3.01 level. The euro also jumped from the 3.30 level to 3.3384 at its highest against the Turkish lira, later falling to the 3.28 level. The Russian ruble fell sharply on its first day of trading after a 10-day holiday period, as a drop in the price of oil cast a shadow across the energy-exporting economy.

The national currency dropped nearly 2 percent half-an-hour into trading, to 76.1 rubles, as the Moscow Stock Exchange resumed trading in foreign exchange for the first time since Dec. 31. The price of oil, the backbone of the Russian economy, has declined over the past week amid fears about a slowdown in China's growth. Russia has also been hit by economic sanctions that Western nations imposed following the 2014 annexation of Ukraine's Crimea.

The sharp decline in the price of oil, now trading at 12-year lows at $34 per barrel for Brent crude, will likely cause a drain on Russia's reserves and push the government to cut down on expenses. Russia has based its budget this year on an average oil price of $50 per barrel, and Finance Minister Anton Siluanov indicated last month that the government is prepared for cuts if crude were to fall to $30. Russian daily Vedomosti last month quoted a ministry draft proposal that would see budget expenses cut by 5 percent across the board.

Russia is running a budget deficit of 3 percent of gross domestic product (GDP) this year. Since Russian President Vladimir Putin has ordered it to be kept below that level, the government will have to let the ruble depreciate further to balance the budget. After the economy shrank 3.8 percent last year, the Russian Ministry of Economic Development expected it to return to growth of about 0.7 percent this year. But with the further drop in oil prices, the economy could instead shrink another 3 percent, the ministry warned.

Unlike in the 1990s, Russia is much better prepared for a recession, as its debt levels are low and it has $340 billion in gold and currency reserves. But they may be running low soon. Siluanov warned last month that Russia would likely deplete one of its two rainy day funds, now worth roughly $52 billion, by the end of 2016 as it tries to plug the state deficit.

The rand plunged as much as 9 percent on Monday morning, the most since October 2008, to 17.91 per dollar, before making a partial recovery. Last year, the currency fell 25 percent against the dollar, dipping sharply in December when President Jacob Zuma fired his respected finance minister and then ousted the new minister four days later. Business confidence has dropped to the lowest level since before former South African president and Nobel Laureate Nelson Mandela was elected in 1994, according to an index released last week by the South African Chamber of Commerce and Industry. The South African central bank will meet later this month, with an aggressive interest rate hike on the radar. In the first quarter, inflation is set to break the 6 percent upper-limit set by the central bank. In November, South Africa raised its benchmark interest rate by a quarter of a percentage point to counter inflation pressure.
RELATED TOPICS