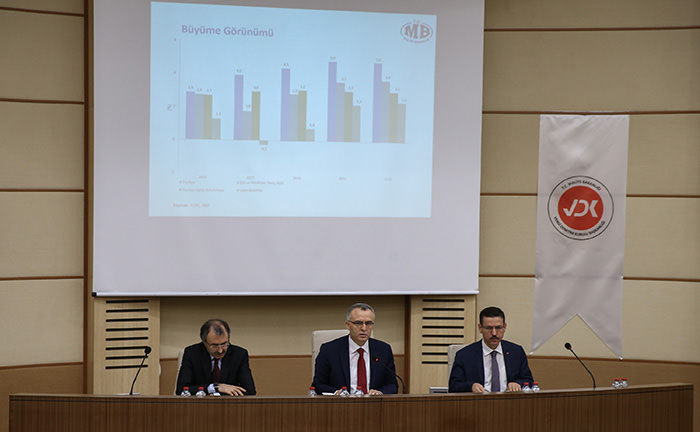 Turkish Finance Minister Naci Au011fbal (Center) (AA Photo)
by Daily Sabah with AA Jan 15, 2016 12:00 am
Finance Minister Naci Ağbal said at a press conference on Friday that the government ran a TL 22.6 billion ($7.4 billion) budget deficit last year. The amount was 1.2 percent of the country's gross domestic product (GDP), and less than TL 2 billion than was forecast for 2015, Ağbal said. "We can say that last year was a very successful year in terms of budget revenue performance," he said. "The general government budget in 2015 will be a balanced budget and will be one of best performances of the last nine years."

Ağbal stressed that the December budget deficit was TL 17.1 billion, with interest payments and personnel expenses such as social insurance payments taking up a large part of government revenue. According to the ministry, government budget revenue reached TL 483.4 billion in 2015, a 13.6 percent increase compared with 2014.

The biggest share of the budget was allocated to the National Education Ministry with TL 109.3 billion, an increase of 24.9 percent from last year's allocation. The Health Ministry will receive TL 95 billion from the budget, according to the Finance Ministry.

Ağbal said the 2016 budget aims to bring various services to citizens and reflects the promises of the ruling Justice and Development Party (AK Party) during the elections. "We are increasing the investment budget by 24.2 percent when compared to the beginning of last year to TL 60 billion. Thus, the share of investment expenditures within the budget, which was 6.6 percent in 2002, increased to 10.5 percent in 2016," Ağbal added.

According to the Finance Ministry, GDP growth rate will be 4.5 percent in 2016, while the forecast for inflation is 7.5 percent by year's end. The ministry estimated exports for the year at $155.5 billion and imports at $210.7 billion. "Under the current conditions, we forecast that recovery in developed economies will continue, growth in emerging commodity importer economies will strengthen and growth in commodity-exporting countries will slow down," Ağbal said.

The country's exports decreased by around 8.7 percent in 2015 from the previous year, down $143.7 billion due to exchange-rate volatility, a plunge in commodity prices and escalating geopolitical risks, according to data from the Exporters' Assembly of Turkey. The central government's budget ran a deficit of TL 22.7 billion in 2014.
Last Update: Jan 15, 2016 4:36 pm
RELATED TOPICS