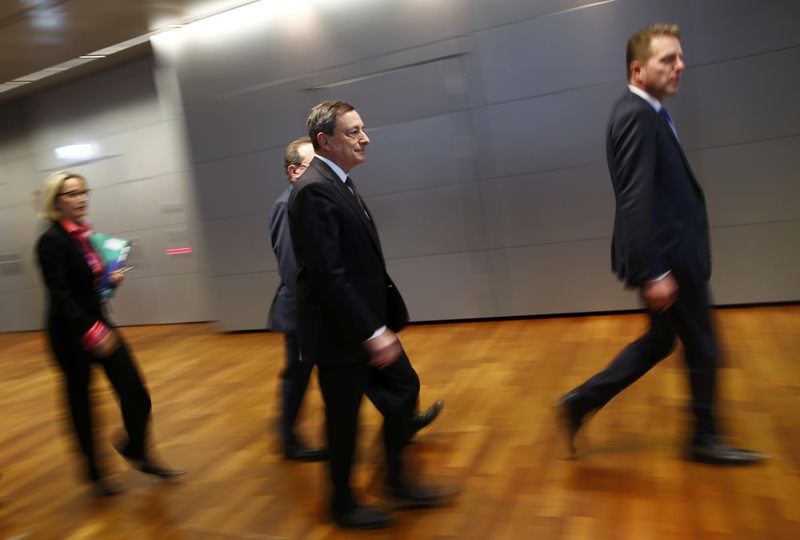 ECB President Mario Draghi arrives for a news conference at ECB headquarters in Frankfurt.
by reuters Jan 22, 2016 12:00 am

The European Central Bank held interest rates at record lows on Thursday as it prints money to lift the economy and raise inflation, but the market crash, tumbling bank stocks and ebbing inflation may set the stage for action later in the year

Turmoil in financial markets and concerns over China and other emerging markets will prompt a March review of the European Central Bank's monetary policy, President Mario Draghi said Thursday, holding out the prospect of further loosening. The euro eased against the dollar as Draghi, speaking after the ECB kept its main rates on hold, told reporters the Bank expected rates to "stay at present or lower levels for an extended period of time". "As we start the new year, downside risks have increased again amid heightened uncertainty about emerging market economies' growth prospects, volatility in financial and commodity markets and geopolitical risks," he said. "It will therefore be necessary to review and possibly reconsider our monetary policy stance at our next meeting in early March," he said, creating potential for earlier action than many in the market had expected.

Many analysts had been predicting a further 10-basis-point cut in the existing -0.30 deposit rate, but not until the June meeting of the Bank's policy-makers.

In December, the ECB Governing Council cut the deposit rate, increased the charge on banks for parking money at the ECB, and expanded its 1.5 trillion euro ($1.6 trillion) quantitative easing programme to buy chiefly government bonds.

Defending the measures, which fell short of some investors' expectations, Draghi said they were "entirely appropriate and effective" given what was known at the time, pointing out that the price of oil had slumped no less than 40 percent since.

The ECB's December projections were based on crude oil prices averaging $52.2 this year, but Brent crude is trading around $27 per barrel and even 2022 oil futures are below $50, indicating little confidence in a quick rebound. "We are not surrendering in front of these global factors," he said, noting that lower energy costs should also serve to boost household consumption and investment.

While Draghi insisted the euro area recovery was moving ahead, he acknowledged that risks to its outlook "remain on the downside", citing the fragility of the global economy and geopolitical risks.

The further dilemma for the Bank is that low energy prices are now impacting other goods and services, pushing even core inflation far from the bank's goal of close to 2 percent and jeopardising the credibility of that target. "Inflation rates are currently expected to remain at very low or negative levels in the coming months and to pick up only later in 2016," he said.

The weakening yuan would export China's deflationary risk and reduce the effectiveness of any rate cuts by limiting the ECB's ability to weaken the euro. Weakness in China could also persuade the U.S. Federal Reserve to slow its rate increases, also putting the euro under firming pressure.

Despite turmoil on financial markets, however, Draghi said he was relatively confident the euro zone's banking system was strong. "So far, we have seen that they (the banks) stand pretty resilient," he said. "We have not seen the potential for instability the likes of which we saw in the pre-crisis times," Draghi said.
RELATED TOPICS