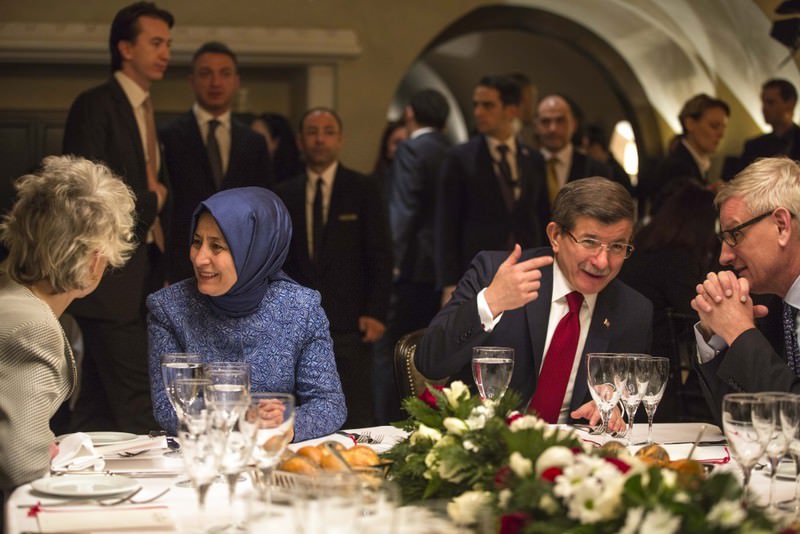 The WEF's senior adviser, Cüneyd Zapsu, hosted a dinner for foreign investors and the Turkish delegation on Thursday evening in Davos. Deputy prime minister in charge of the economy, Mehmet Şimşek, along with his forerunner Ali Babacan and Central Bank of the Republic of Turkey (CBRT) Governor Erdem Başçı accompanied Davutoğlu, who shared some details about his trip to the United Kingdom and Davos, which started on Sunday, as well as his meetings with leading investors. Davutoğlu met with the CEOs of international companies, which have a total market capitalization of more than $4 trillion, as part of the talks he held at the WEF. Davutoğlu addressed projects with a total value of more than $3 billion that mainly consist of investments in finance, infrastructure, logistics and industry. He announced that Turkey is the safe harbor of the region, as the country is becoming the third-fastest developing country in the world after China and India.

Davutoğlu invited investors to visit Turkey and discover its investment potential. "Turkey is a country where dynamism and multiple colors gather. If energy is crucial, Turkey is crucial, too," Davutoğlu said.

Along with reforms that the government is implementing to ease investments, the turquoise card is intended to strengthen the country's labor force. It is a system being developed to attract a high-qualified labor force in accordance with the final transformation program within the scope of the 10th Development Plan, which was announced by President Recep Tayyip Erdoğan. The point-based system will include criteria regarding education, qualifications, wages and language. In this respect, after a certain trial period, the turquoise card will suffice as a long-term residence permit for those who qualify, allowing foreign investors to benefit from certain rights without becoming citizens.

As part of the 10th Development Plan's Preferential Transformation program, the bureaucratic processes regarding work permits and working conditions of highly qualified professional foreigners and their dependents will be simplified. The "Action Plan for the Qualified Labor Force Attraction Center Program" states that countries can become more competitive within their development processes by benefitting from qualified foreign employees along with their domestic labor force. The program adds that, when compared to developed countries, Turkey is not capitalizing on the potential gains of recruiting a highly qualified labor force abroad. In order to increase the country's knowledge-based competitive power at a global level, this program aims to put Turkey on the radar of high-qualified foreign labor forces by improving the cooperative efforts between universities, industries, the general public and research centers via offering suitable conditions to both local and foreign high-qualified labor forces, with emphasis being placed on recruiting Turkish citizens residing abroad.

According to the action plans described in the program, the first areas that require a qualified labor force from abroad will be determined and the conditions and benefits Turkey has to offer - mainly in the research, arts, business, education and culture sectors - will be promoted abroad. Furthermore, under the program, efforts to exponentially increase the contributions Turkey makes to the European Union's Framework Programs will take precedence, and similar programs will be developed with countries where Turkey already has powerful economic, historical and cultural bonds.
RELATED TOPICS