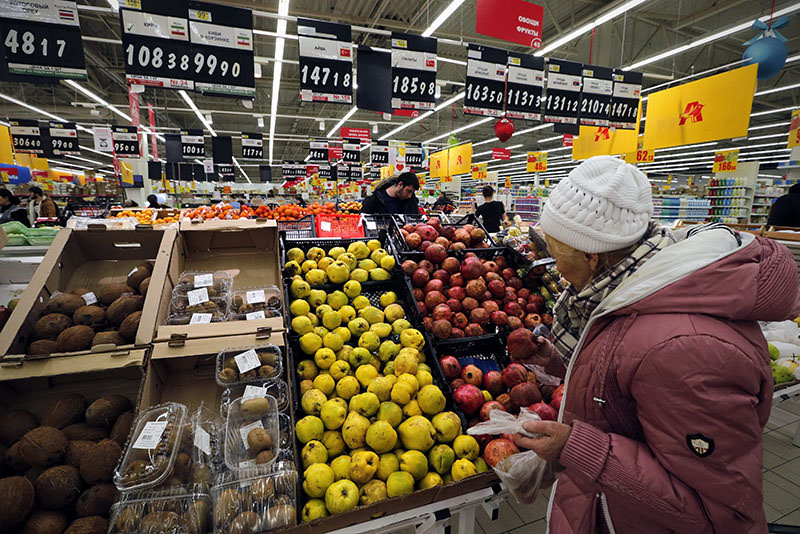 A Russian woman chooses Turkish fruits at a supermarket in St. Petersburg, Russia, 02 December 2015 (EPA photo)
by daily sabah
Jan 25, 2016 12:00 am
Iran has refuted allegations that appeared recently on some media outlets claiming the country had banned the re-exports of Turkish goods to Russia.

The statement which was published on the website of the Iranian Embassy in Ankara on Jan. 25 said: "There has not been any ban imposed by the Islamic Republic of Iran on the export and transit of Turkish products to Russia via Iran." Any other "speculations" have no truth value, the statement said.

Some media outlets previously claimed that the Iranian Ministry of Industry and Commerce had issued a statement, saying the transit of Turkish products to Russia from Iranian soil was forbidden. The Iranian Embassy's Jan. 25 dated press release however said that the statement only pertained to the incident(s) in which certain people had tried to deliver Turkish goods to Russia using fake certificates of origin and fake transportation documents, and therefore trucks with Iranian license-plates as well as the goods inside were seized.

The statement further said, "The Islamic Republic of Iran has always favored the development of various economic collaborations with Turkey, such as in the areas of transportation, commerce, and mutual investments."
Last Update: Jan 25, 2016 10:37 pm