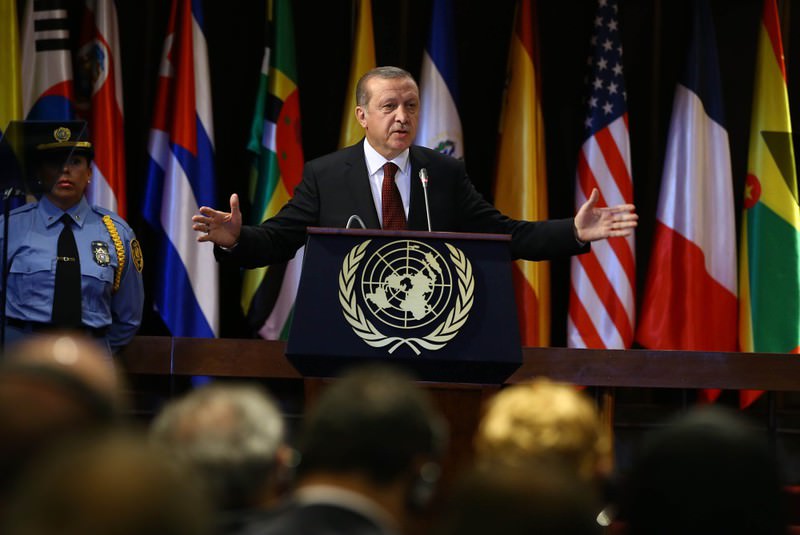 President Erdou011fan speaks at a conference at the building of the Economic Commission for Latin America and the Caribbean on Monday.
by Serdar Karagöz Feb 03, 2016 12:00 am

President Erdoğan called on Turkish contractors to be more active in Latin America during his visit to Chile. Chilean Economy Minister Cespedes also expressed his desire to capture the attention of the strong Turkish construction sector to his country

Accompanied by approximately 100 businessmen during his visit to Chile, President Recep Tayyip Erdoğan emphasized the importance of Turkish contractors investing in Latin American countries. "We should stimulate our contractors to take action here," Erdoğan said. "Regarding this, if our contractor firms take action concerning the superstructure and infrastructure of these lands, I think this would result in bringing benefits to us [Turkish economy] as well." In parallel to Erdoğan's remarks that the Turkish construction sector is "highly developed," Chilean Economy Minister Luis Felipe Cespedes said, "If we manage to develop our cooperation with Turkey in this field, Turkish firms can both invest in Chile and utilize our country in order to access our neighboring countries as well."

In August 2015, Turkey placed second on the list of the 250 largest construction contractors in the world for the eighth year in a row. The list is prepared annually by calculating revenues gained from projects conducted outside home countries, according to the Engineering News Record (ENR), an international magazine for the construction sector.

Furthermore, on his Latin America trip, which covers his planned visits to Chile, Ecuador and Peru, Erdoğan became the first Turkish president to visit Chile in 21 years. During his visit there, he said that the volume of foreign trade with Latin American countries was not yet at the desired level. "These [Latin American] countries are neglected by Turkey, which also means Turkey is neglected by these countries. However, Chile is the country with which our diplomatic relations are at the greatest level compared to the other Latin countries. By means of our visit, we will also celebrate the 90th anniversary of the foundation of our relations. Chile is a key country for our opening in Latin America and the Caribbean. This strategy of opening up over the past 10 years has gotten a very important boost," Erdoğan said after meeting Chilean President Michelle Bachelet.

Chile was the first Latin American country to officially recognize Turkey in its early years after being founded and Erdoğan stressed the country also was to take the first step towards a Free Trade Agreement (FTA) with Turkey. He said "despite the fact that we are still not at the ideal point in terms of trade relations, in terms of volume of trade, Chile is the country with which we have the highest share in foreign trade. I hope that through this visit, we carry this [the volume of trade] towards the highest trade possible. Thus, I care about this visit a lot. During this visit, we [politicians] are accompanied by approximately 100 businessmen. If, here, our businessmen put in the necessary effort, we can rapidly develop our relations with Chile, Peru and Ecuador."

Furthermore, emphasizing the importance of Turkish businessmen in maintaining strong relations with their counterparts, Erdoğan said, "In these lands [Latin American countries], mining and copper are very important. We [as Turkey] have many entrepreneurs in this field."

Commenting on the fact that Turkey does not have FTAs with Peru and Ecuador, the president said, "They have preferred to stay a bit distant, actually. It would result in a much more different [beneficial] development if we help them adopt a more friendly approach."

In addition to his remarks regarding the Turkish construction sector, Cespedes told Anadolu Agency that he is very content after President Erdoğan's visit.

Saying that Chile has a stable economy and an independent central bank that can achieve the targeted inflation rate, Cespedes said, "We are an exporter country. We are willing to improve international trade and attract more investors. For this aim, in our country, the legal and institutional systems carry out their necessary functions."

Cespedes added, "In Chile, mining investments used to be the priority; however, currently, energy is the main focus. There is a need for investments in this field. Moreover, we think that entrepreneurship is very important. We observed how important innovation is in Turkey. We are attempting to develop an environment regarding this. We welcome foreign investors as much as we can."

Trade between Turkey and Latin American countries has expanded 800 percent over the past decade, to $10 billion in 2014, and Ankara has opened new embassies around the region.
Last Update: Feb 03, 2016 12:36 pm
RELATED TOPICS